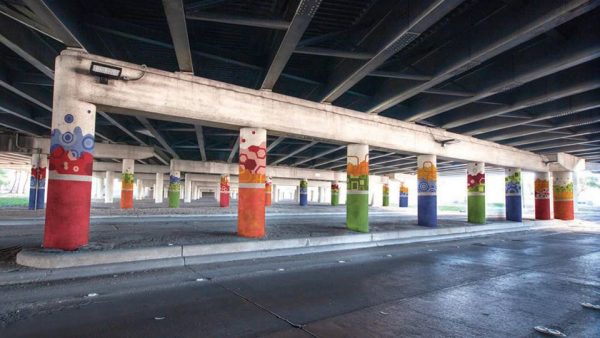 A mock-up of the Perspectives project

The University of Houston (UH) has announced that local artist Mario Enrique Figueroa Jr., who is better known by the moniker GONZO247, is collaborating with the university’s students on a project to transform an underpass near the UH campus into a collaborative mural.

Covering 22 concrete pillars under the I-45 freeway at Cullen Boulevard, the Perspectives mural project capitalizes on bright colors and large, defined shapes to transform the underpass into a work of art that will attract the attention of passers-by. Although UH reports that the artists can’t use typography in their design due to the busyness of the intersection (it is a main thoroughfare for the University), they can add details that will be visible to pedestrians. A pattern of shapes and characters are meant to represent the four nearest communities to the intersection: EaDo, Eastwood, Third Ward, and UH.

Gonzo commented on his involvement with the project:

“Growing up, I had access to one mural, and that was all I was able to see. Now there’s so many in the city, and I just love the idea that artwork is up and available to inspire these students… . We are all working together to create something that will be accessed and be seen by so many people. It’s a great way to represent a huge area and be able to visualize it through art. It’s a great space where we are all kind of crossing paths. I think it’s a beautiful place to put the artwork.”

The repeated shapes and colors in the mural come from research UH students did on the surrounding communities. The four areas are represented by (via UH):

A kickoff party for the installation occurred on April 13, 2019, and the project is expected to be completed by mid-May.