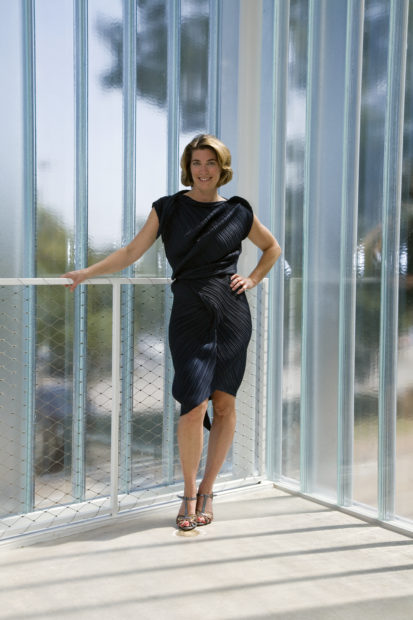 Claudia Schmuckli recently stepped down as director of the Blaffer Art Museum at the University of Houston to become the Curator-in-Charge of Contemporary Art and Programming at The Fine Arts Museums of San Francisco, which include the de Young and Legion of Honor museums. Rainey Knudson sat down with Claudia before she left town to ask about Urs Fischer, renovating on a shoestring, and what she’ll miss about Houston.

Glasstire: How did you come to work at Blaffer?

Claudia Schmuckli: I moved to Houston in the summer of 2003. I had been working at MoMA as an Assistant Curator working for John Elderfield, and I was still freelancing for MoMA for another year, and [then-director] Terrie Sultan approached me about joining the Blaffer. I was interested in reentering the social fabric of an institution after having worked freelance from home for a year.

I was interested in exploring a smaller space that worked like a Kunsthalle, a different type of institution, that seemed much more nimble. Unlike a large museum, where you can only do one project every three years, I could produce more projects in a shorter amount of time.

The story is that you were supposed to be the in-house art consultant at Enron and you got a call the day before your move that it wasn’t going to happen.

No, that’s not exactly right. When I was looking to relocate to Houston, I was looking at various job opportunities here, only one of which was the Enron position. But before I even had a chance to think about whether that was something I wanted to pursue, that whole thing, you know, disappeared.

You went from being the curator at Blaffer to being the director who also curates. How are those roles different?

As a curator you’re more invested in each individual project, and the curatorial vision is more grounded in your research in the individual artists.

A director has a much broader view of the program and the decisions are very different. [As a director] your priorities shift in the sense that you take a much more holistic view of what you want to see accomplished. Whether the exhibitions are curated by yourself or by others, they still are all a part of an artistic direction that you envision over the long term.

Do you think it’s a good idea for a director to have a curatorial role?

It depends on the size of the institution. At an institution like the Blaffer, it is inevitable the director has to assume a curatorial role simply because of the structure and the budget and the size that are associated with an institution like this. If you scale up I think it is better for those roles to be separated simply because it becomes too difficult to manage. Also I think it’s important that an institution has more than one curatorial voice, which is why I’m very happy that I get to work with curatorial fellows here every two to three years, which gives us an opportunity to hire a young, ambitious curator who will bring totally different perspective to the institution.

What is your favorite exhibition you curated at Blaffer?

I have to admit that Urs Fischer, which was my first show at Blaffer, is still one of my all-time favorite moments to think back on. Partly it had to do with the fact that I was working under very, very restrained circumstances. I had a budget of $30,000 to realize an exhibition and a publication.

I knew I wanted to work with Urs Fischer; he was an artist that I knew from Europe that had not been shown in the United States, whose potential loomed large and I felt it was important to introduce him here because I felt his ascendancy in the art world was imminent.

We decided we weren’t going to rely on existing work and borrow works from collectors, and that we would set him up here in Houston for two weeks and rent him a studio and then he would make the entire exhibition on site. It’s still one of the exhibitions that I feel has long-lasting implications for my curatorial practice and also really introduced a lot of elements into Urs Fischer’s work that he has drawn on ever since.

At the moment they range anywhere between $50,000 and $100,000 depending on the scale, and whether there is a publication.

You’re going back to a strictly curatorial role. What will you miss about being a director?

What will you not miss about being a director?

<laughing> What I won’t miss is having sleepless nights where I worry about the bottom line at the end of a fiscal year! But that’s about the only thing.

You oversaw a major renovation of the building, but before that there had been a plan to build an entirely new building.

Yes, I became the director of the Blaffer in January 2009 in the midst of the recession, which had really crushed the dreams of building a new museum at the time.

My instinctual reaction was to try and figure out whether or not we could redirect the effort from building an entirely new museum towards renovating the existing structure for a much more modest investment. It was my good fortune that Jim Furr [principal at Gensler] was on the board at the time. He was very generous and allowed me to work with his team to come up with a preliminary program for a building and also a preliminary estimate from a construction company as to what we might accomplish. And it turned out to be a $2 million investment versus a $20 million investment.

What do you think is most successful about the renovation?

The guiding tenets from the beginning were visibility and accessibility. [The architects] came up with this very simple but very effective idea of simply moving the staircases out of the gallery and translating them into a signature façade, basically doing two things in one.

What I’m most proud of is after four years it is still an incredibly beautiful and functional building. It has not suffered at all, the design is excellent, it was well-executed and has delivered us a space that is not only aesthetically appealing but that also works really well in terms of a gallery space.

One cannot talk about Blaffer without mentioning the distance to the center of Houston, or at least the psychological distance. Do you feel like distance always will be a challenge for Blaffer?

Well, I do think it has become less of an issue as more and more people become aware how easy it is to get here, that there is public transportation that literally now stops within a 5-minute walk from the museum and from campus. The fact that there is designated arts parking in the lot in front of the museum which is always available to patrons. But it still is an issue that needs to be addressed. There needs to be a lot more communication about the ease of getting here and being here.

One of my ambitions coming in was to tackle this assumption that Blaffer was this “hidden jewel.” And that’s certainly one of the most repeated phrases that I’ve heard when I was a curator here, and as lovely as it is to be known as a hidden jewel, as the director of an institution, you don’t really want to be hidden; you might want to be a jewel but you want everybody to see it and appreciate it.

You’re Swiss, and you’ve lived in New York and Texas for a chunk of time, and now you’re going out to San Francisco. Do you think the idea of regional cities is an important notion these days?

I think it has really changed dramatically over the last 15 or 20 years that I’ve been in the professional art world. With the shift of attention within the art world towards different kinds of practices, I feel there’s a lot of attention being given to what’s happening everywhere in the world. And nowadays I don’t really think of what I do as being in the center or the periphery. I just do it.

What’s been thrilling about working in Houston is that you can take a lot more risks partially because a lot of people didn’t think of it as cutthroat, and that really freed up artists to think about their work in different ways. I feel as a result we got to produce some amazing work that we wouldn’t have been able to do if we had been a similar institution in New York City.

What will you miss most about Houston?

The people. It’s an amazing community, I’ve been extremely happy here. We talk about it all the time with other colleagues throughout the country; it’s an incredibly supportive, collegial community in ways that are quite unique. I can only hope that I’ll be able to recreate something like that in San Francisco.

What will you not miss about Houston?

Oh, just those few hot days in the summer.

What are you most looking forward to in San Francisco?

What I’ve missed in my seven years as director here is working with a collection. I realized when the opportunity in San Francisco presented itself… [the] idea of working across histories and across collections at this point in my career was very attractive. When you work with a collection you have the opportunity to acquire work for a museum. It’s a very different form of building a legacy and building the history of an institution.