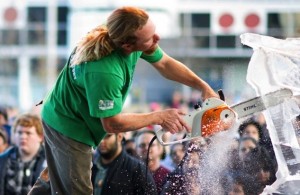 Discovery Green’s 4th annual ice sculpting competition features a dozen acclaimed ice artists from around the country using chainsaws and blow torches to battle for total domination this Saturday, January 7 in downtown Houston. San Antonio Ice master Buddy Rasmussen, who took the grand prize in 2011, will be back to defend his title. Ice sculpting begins at 10 a.m., with judging by experts Walter Odermatt and Alice Connelly at 3 p.m., followed by a grand finale ice fight between The Reverend Butter and the winning master carvers to the music of rock band Downfall 2012. This year the eco-friendly competition features ice blocks harvested using recycled rain water, which will be melted and used to water the park’s landscaping. Free!