A Graffiti Review by an Interested Houston Sixth Grader 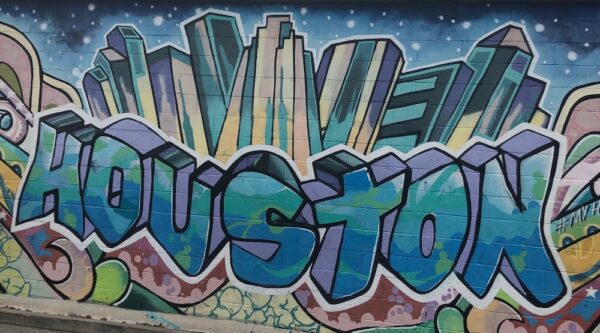 A Houston mural: this work by GONZO247

Note: As part of an initiative to inspire competition and rigor in arts writing in education, one of my student’s written pieces will be featured on Glasstire each year. The following review of GONZO247’s Houston mural is by Marley Reese, a sixth grader (at the time of writing) from Tanglewood Middle School in Houston ISD.

Imagine moving your arm gracefully across a wall creating splashes of color. You put your spray can down only to grab another one. After shaking the can for a few seconds you add a few finishing touches to your masterpiece. When you are finally done, you step back and look over your  graffiti. After a proud feeling passes you think, “How could something like this ever be illegal?”

Graffiti [as we know it] in the U.S. originated in the late 1960s in Philadelphia, when artists Cornbread and Cool Earl tagged their names all over the city. When people heard of this, it immediately spread. All over, people started to graffiti. Soon some people realized they could communicate messages and make art this way, by painting how they felt directly onto walls. Unfortunately, property owners and the government disapproved of this, calling graffiti vandalism and deeming it illegal. This didn’t stop people from doing it, though. It has remained a popular art form to this day. It’s also become a popular art form among the property owners who once disapproved — now many building owners commission graffiti artists to adorn their walls with murals. Much of the graffiti seen on walls now is actually legal.

The Houston wall at Graffiti Park on 2011 Leland Street is a must-see. Created by GONZO247 in 2015, its tiny details, such as its many patterns and colors, convey a message of Houston’s liveliness. The graffiti gives off a warm and powerful feeling with its main yellow and blue colors. It also makes Houston seem large and important with its big bold letters. The skyscrapers point out that Houston is a major city and all the different patterns show that we are unique. The graffiti makes Houston look very awake, alive, and fun.

However, GONZO247 should have added some of Houston’s fundamental landmarks. For instance, the Astros and NASA are really big in Houston. He could have incorporated the Astrodome, Minute Maid Park — to name a few places — that really express what Houston is. Downtown is only one of the many aspects of Houston. The colors in the patterns under “Houston” don’t go together as well as they could have. The dark red and blue don’t go together as well as say, orange or green and blue. The bottom of the mural even looks somewhat bland, as if it was losing its excitement.

GONZO247’s Houston mural sends a true message of how awake and maybe even loud Houston is. The Graffiti Park, where the artwork is located, is generally very eye-catching, and it’s fun to take photos there to post on social media. This mural is definitely worth a visit. 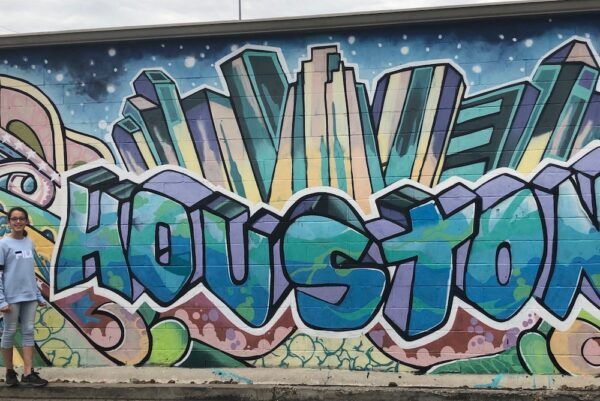 The author of this review with the mural she wrote about.

I thoroughly enjoyed Marley Reese’s review of the Houston Mural by GONZO247. Not only do I love and appreciate children’s art, but I’m now a fan of the clear perception and honest eye of this youthful critic. I taught English to middle schoolers early in my teaching career. Thanks for your review, Marlee. You nailed it.

This is brilliant and inspiring. As a middle school art teacher in Fort Worth, which has seen many new murals in the past few months, you’ve inspired me to rethink how I can present these works to my students and get them talking! More of these, please!