Not Cool: Cop Killer Street Art Pops Up Around Houston 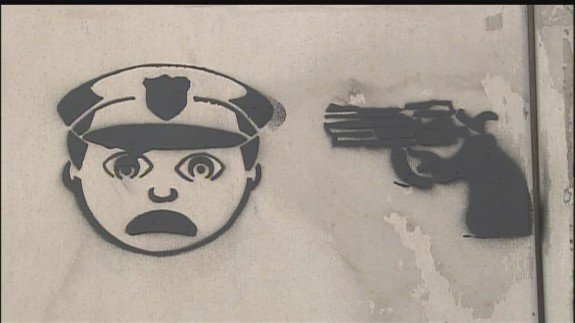 Only days after Houston graffiti artist GONZO247 announced that he and Carolyn Casey-Figueroa have established The Graffiti and Street Art Museum of Texas (GASAM), some ugly street art has been appearing around town. Worse than the timing of the renewed celebration of Texas street art is the fact that these images are showing up right after last week’s murder of suburban Houston Deputy Darren Goforth.

On one of his Facebook pages, GONZO posted the following reaction:

1. The idea of pointing a gun to anyone’s head is disturbing.
2. Graffiti and Street artists have been trying for years to disassociate themselves from gang activity, preaching that we are not all the same. I would think, street artists would reframe from doing the same to law enforcement generalizing them because of the ones that do major harm to the police image.
3. There are some in every group (whether law enforcement or graffiti artists), do you want to be defined and threatened because of those “some ones” in your group? My thoughts.

Even the comments on his post differed. While most agreed with him, some viewed their street artist cred as synonymous with living outside the law in whatever form that takes. As reported by Click2Houston, there has also been some anti-police statements spray-painted around town. A crudely lettered “Fuck cops” seems par for the anarchist course, but the stenciled cop with a gun pointed at his head is not so cool.