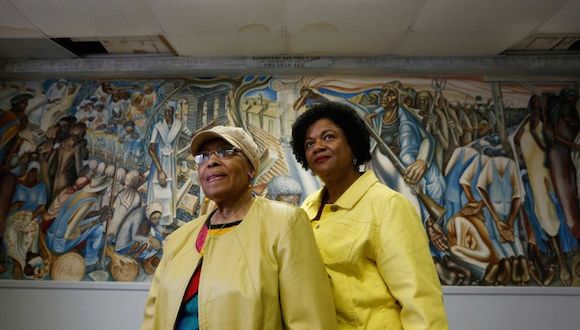 The Houston Chronicle recently reported that a mural by legendary Houston artist John Biggers is in danger. The work, titled Contribution of Negro Women to American Life and Education, currently sits under water-stained ceiling tiles in Houston’s Blue Triangle Multi-Cultural Association. The association needs to act fast and repair the roofing above the mural, but available funding is slim.

This is not the first Biggers mural to need restoration: his Web of Life mural at Texas Southern University was recently restored as part of a larger effort to save some student murals at TSU that were created during the Biggers’ tenure there as founder of the art department and a longtime faculty member, and that were later painted over at the direction of TSU president John Rudley, who called them “eyesores.” (Rudley backed off that assertion and ended up giving $50,000 out of his office’s discretionary fund to help restore the murals.)

Recently, community members have begun donating to Blue Triangle to help preserve the Biggers mural there. The effort will necessitate replacing the community center’s roof and restoring the painting itself.