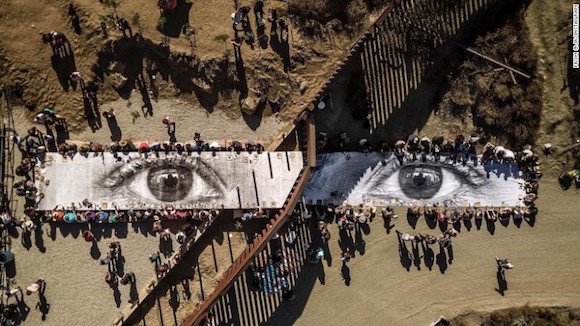 The group show Icons & Symbols of the Borderland, comprised of more than 100 works of art that address “socio-political issues, immigration topics, collective memory, philosophical ideals, religious iconography, the environmental landscape, and food culture” debuted in 2015 at the University of Texas at El Paso Centennial Museum, traveled to Austin’s Mexic-Arte Museum last fall, and is now showing at San Antonio’s Department of Arts & Culture at Centro de Artes (in the Market Square space formerly known as Museo Alameda) through December 17.

The French artist JR takes the idea of borderland art quite literally. His huge mural, visible from the U.S. side, depicts an image of Kikito, a one year old boy from the city of Tecate, who cannot cross the border but may represent the future of the U.S. Now, JR has installed a huge table between the U.S./Mexico border, reports the Washington Post.

Last Sunday, the long table hosted a huge picnic on both sides of the border. They shared the same meal, the same water, the same live music, the same photograph along the long table— a massive image of the eyes of a “dreamer”—on each side.