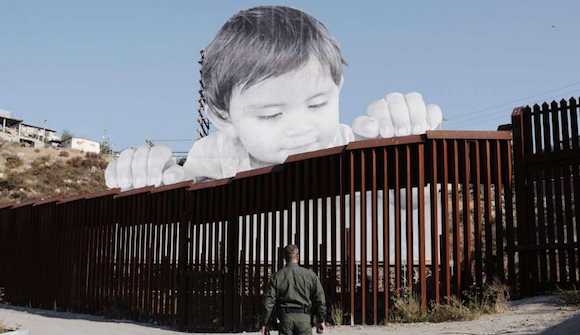 The French photographer and artist JR has placed a huge scaffolding installation on the Mexican side of the border between the United States and Mexico reports My San Antonio. The mural depicts an image of Kikito, a one year old boy from the city of Tecate, who cannot cross the border but may represent the future of the U.S. The piece is fully viewable only from the American side.

A New York Times article quotes JR: “People will always migrate,” he said. “When we built walls, people built tunnels. When we closed places, they went by the water. The history of humanity is the story of people migrating. Of course, that has to be regulated.” The Times ends with JR stating, “As an artist, I try to bring back perspective. For this little kid, there are no walls and borders.”

Murals and the Flu in San Antonio: Free...