The month begins on September 15 because this date is the anniversary of independence for a handful of Latin American countries, including Costa Rica, El Salvador, Guatemala, Honduras, and Nicaragua. Additionally, Mexico and Chile celebrate their independence days on September 16 and 18, respectively.

While celebrations continue and are enjoyed in communities across the United States, there is not a consensus on the correct term to use for this national holiday. In recent years, U.S.-based Spanish-speaking communities and/or communities with Central and South American heritage have raised concerns about the continued use of the pan-ethnic term “Hispanic,” which inherently ties a large group of people together through their ancestral connection to the colonizing country of Spain. And, while the pan-ethnic gender-neutral term “Latinx” has emerged and is often used in academia, many everyday people do not identify with the word.

This year, perhaps in response to these recent conversations, The National Council of Hispanic Employment Program Managers (NCHEPM) along with Federal agency partners, employee resource groups, and members of the general public, selected the Hispanic Heritage Month theme Unidos: Inclusivity for a Stronger Nation.

Learn about and celebrate Latino culture by attending exhibitions, talks, and events that center Latino artists, experiences, and stories. Below, see a list of programs for the month happening across Texas. The descriptions have been provided by the presenting organizations: 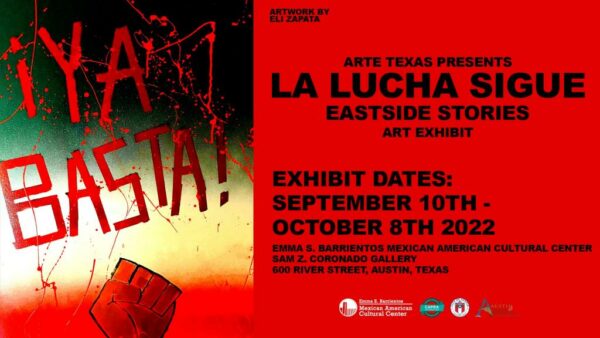 Our La Lucha Sigue exhibit symbolizes the artwork that has a connection to the cultura, to our identity, and to our history. These native East Austin artists as well as our activist heroes have fought the lucha through battles in our community as well as honor our elder leaders who fought hard for equality, injustice, humanity, and most of all for a good quality of life. This lucha exhibit is the expression of East Austin Cultura. It displays passion, pain, knowledge, sweat, decades of hard work, and our history.

Arte Texas’s mission is to create a forum to connect veteran artists with emerging talent and for artists, to give back to the community they are rooted in and draw inspiration from their works of art in their environment. Arte Texas is focused on preserving, restoring, and celebrating the murals of street art, public art painting from the heart and soul of East Austin, a historical community where our Indigenous people are rooted: Mexican, Mexican-American, Chicano/a, Latino/a.

Colonial Latin America was a mosaic of races and cultures that intermingled, and very often married. As a result of this new diverse population, a popular art genre emerged in the 18th century: Casta paintings.

Casta paintings depict several scenes of mixed-race couples with their children. In each, artists labeled family members with an invented racial category, or “caste.” The Spanish crown and elites tried to create order in New Spain (now Mexico) with these idealized paintings. The reality, in which divisions of race and class were fluid, was much more complicated.

Learn more about this Mexican art genre with curator of Painted Cloth, Rosario I. Granados, and historian Susan Deans-Smith.

This is a collection of artists that have not attempted to assimilate within the dominant culture of the United States but have adapted to survive and thrive within it. These artists have adapted to present the mix of their cultural backgrounds and that of the United States, often representing a mix of two or several cultural influences. With each artist, their choices have shown a unique voice commenting on the ever-shifting landscape of the world around them or the world in themselves.

Celebrate Hispanic Heritage Month by visiting PPHM and seeing our Quinceaneara Traditions exhibition. Admission will be FREE from 9 am to 5 pm on Saturday September 17 graciously sponsored by Telemundo, Atmos and Las Parrilladas Nortenas.

“Yanga: The AfroMexican Experience,” on view at the Latino Cultural Center.

LATINO ARTS PROJECT presents an immersive art experience at the Latino Cultural Center. This free exhibit brings awareness to the diversity of cultures within our communities and highlights the commonalities we share.

The little known story of Gaspar Yanga will be explored, for the first time, in a separate museum exhibition. Past exhibitions have included Yanga’s story within context of other topics, but this is the first museum exhibition exclusively about Yanga, the first liberator of the Americas. Yanga and the AfroMexican Experience features an entire gallery devoted to Yanga, exploring this historical story with documents from the Archivo General de la Nacion (National Archives) in Mexico City and Archivo General de Indias (Archive of the Indies) in Seville, Spain.

The second gallery is devoted to exploring the cultural impact of the AfroMexican experience. The exhibition explores in depth the influence in music, dance, food and art in each of the three main areas of Mexico with a direct African impact.

Learn about the African experience in the Mexican state of Veracruz, as the main landing site for many of the enslaved Africans that went directly to Mexico on the Caribbean coast, Costa Chica, the southern Pacific area that crosses the Mexican states of Guerrero and Oaxaca and the Texas bordering state of Coahuila that became a refuge for former slaves from the US. 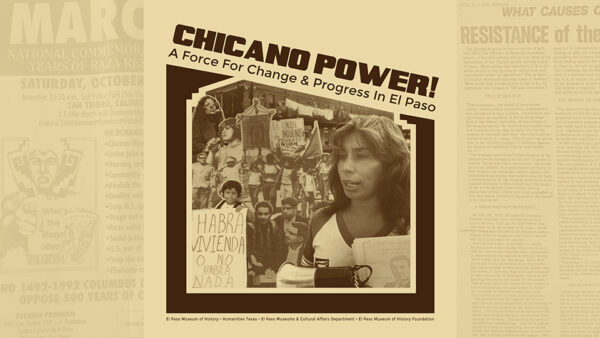 “Chicano Power!: A Force for Change & Progress in El Paso,” on view at the El Paso Museum of History 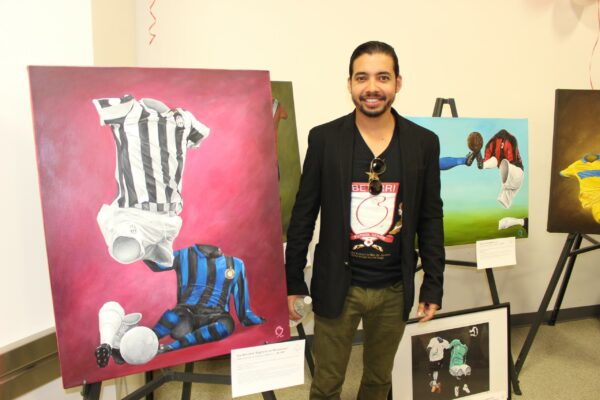 In celebration of Hispanic Heritage Month, we want to highlight the role of soccer in the Hispanic culture: Let’s Talk Soccer!

Be inspired by our guest speaker Betirri, an international artist recognized primarily by a series of paintings depicting bodiless sport figures in motion, and member of the Harris County – Houston Sports Authority. This conversation will be moderated by Lourdes Remond, Community Engagement Manager at The Museum of Fine Arts, Houston.

Sprawl out with a blanket or lawn chair for an outdoor screening of the 1997 Selena biopic at the Downtown greenspace. 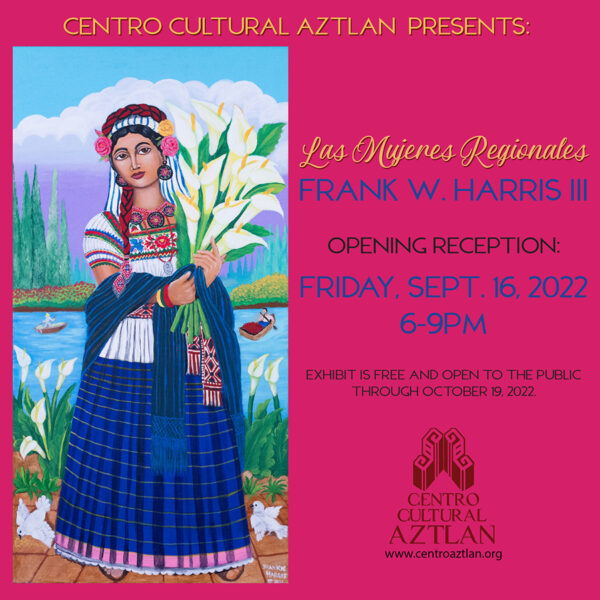 Centro Cultural Aztlan begins its Fall Arts Festivities with a solo exhibition of Las Mujeres Regionales, a series of new works by local artist Frank W. Harris, III. The exhibit opens on Friday, September 16, 2022 from 6 to 9 pm in the Galeria Expresion located at 1800 Fredericksburg Road in the Deco Building and will be on display through October 20, 2022. The exhibit is free and open to the public.

Frank W. Harris, III is a native San Antonian and a graduate of Jefferson High School. He attended the Art Institute of San Miguel de Allende Guanajuato and received a Bachelor of Arts degree from Trinity University in 1983. Frank’s work reveals a deep emotional influence by his maternal grandmother Doña Petra Ortega’s collection of Mexican calendar art. His fascination with Mexican folk art and textiles would become the subject matter of his paintings. Frank began his own collection of Mexican regional attire from every Region and State that make up the country of Mexico. The exhibition entitled Las Mujeres Regionales is the result of his deep love of Mexican culture and decades of constant creative effort. We thought this would be a great exhibit to celebrate Las Fiestas Patrias and Hispanic Heritage Month.

In conjunction with Hispanic Heritage Month, the Alamo will be celebrating Tejanos connected with the site’s history. This event will feature local cultural organizations, descendants, living history, and more. From early San Antonio settlers to 1836 Alamo Defenders and non-combatants to Juan Seguin to Adina De Zavala and more, Tejanos at the Alamo will highlight the many important Tejano figures who have made an impact on the Alamo and the larger San Antonio community.

La Malinche: Traitor | Savior is a new chamber opera by composer Nathan Felix about La Malinche, an enslaved Indigenous girl who became Hernán Cortés’ interpreter and cultural translator. The opera is broken into five short acts over the course of which the audience sees Malinche go from a slave to a tool for Cortés’ conquest of Tenochtitlan. Reviled by her fellow slaves, she fearlessly forges a new path in her belief that a new Mestizo ethnicity is the inevitable future and her lasting impact. 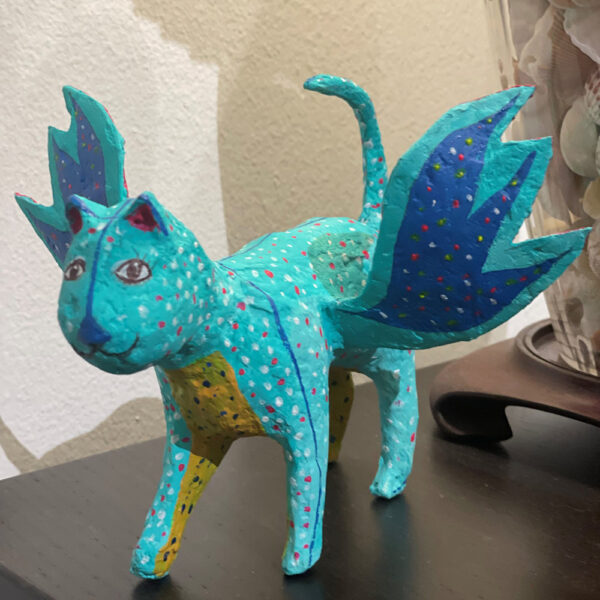 Celebrate and learn about Hispanic and Latinx art alongside the young people of Café con Leche.

Join us for our free four session class workshop to celebrate Día de los Muertos create your own Alebrije with Teaching Artist Auria Sánchez-Henríquez. Alebrijes, often depicted in Spanish folk art, are “spirit animals” that guide the spirits of ancestors on their journey through the land of the dead.

Through the exploration of 3D artistic techniques and themes of remembrance and tradition, the project illuminates the connection among visual language, self-expression, and cultural heritage. Celebrate the culmination of this experience in the Día de Los Muertos or Day of the Dead Parade in downtown Wichita Falls this Fall.