In a letter dated June 9, 2022, Michael Torres, the President of the Board of Directors of the Mexic-Arte Museum, resigned. That same week, four other Board members resigned, leaving 15 members helming the organization. 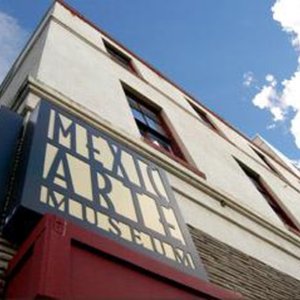 In his resignation letter (which is included in full at the end of this story), Mr. Torres, who has served on the board since 2011 and as President since 2018, referenced several allegations made by current and former staff against the museum’s Executive Director, Sylvia Orozco. Specifically, he cited the staff’s concern around an unsafe workplace, as well as improper care of the institution’s art collection. Last week, the Board made a public statement addressing some of the concerns raised by staff. In it, they said that, “Though these concerns had not been brought to the Board of Directors directly, the entire Board takes the concerns of our current and former employees seriously….”

Mr. Torres’ letter also laid out specific action steps that have been taken by the Board, which were not described in detail in the organization’s previous public statement. According to Mr. Torres, “The Executive Committee heard these concerns, and then came together hiring outside professionals in Crisis Management with experience in PR, HR, and Legal. Working with the Crisis professionals, the Executive Committee commenced an investigation and drafted a series of Recommendations to resolve the issues including organizational changes, an HR Audit, and building and safety remediation, and others.”

Mr. Torres goes on to explain that despite these actions, the board has met resistance from Ms. Orozco and another unnamed board member. In the letter, he also states specifically that “during the June 6th Board meeting, many of us were told that we could not ask questions or make a statement at the Board meeting. Nor would we be allowed to call a Board meeting to address the contents of our investigational findings.”

A statement that Ms. Orozco provided to Glasstire indicates that during the board meeting, “all Board Members asked questions, gave input and statements and the Board Secretary [Nick Barriero] documented numerous questions asked by multiple board members.”

Additionally, Mr. Torres explained to Glasstire that though he served in the role of President of the Board, the Mexic-Arte’s bylaws “don’t allow for the President to call a board meeting. Either the Executive Director can, or a majority of the board, or a majority of the Executive Committee.” While Ms. Orozco has told Glasstire that this statement is untrue, the institution’s current bylaws, which were provided by Mexic-Arte and reviewed by Glasstire’s staff, indicate that Mr. Torres is correct in that the Board President, alone, cannot call a meeting. According to Ms. Orozco, the organization is currently in the process of updating its bylaws.

Mr. Torres also indicated to Glasstire that in his experience, Ms. Orozco holds a position of authority on the board that is more akin to a Chairman of the Board (or President) than an Executive Director. This is atypical for nonprofit boards. As explained by CharityLawyer, a blog which provides simplified explanations of nonprofit law: “The Board of Directors is the collective boss of the CEO/Executive Director… [and] is responsible for the governance of the non-profit, which implies final meta-level and long-term oversight and responsibility for finance, programs, and legal compliance.”

George T. Elliman, who served as Board President prior to Mr. Torres, also resigned, effective June 10, 2022. Mr. Elliman began his resignation letter, provided to Glasstire, with a clear and unequivocal statement: “I love Mexic-Arte Museum and all that it stands for and respect greatly all that it does for the whole community.”

To this point, Mr. Torres told Glasstire about the institution’s need for more support positions to take on some of the responsibilities Ms. Orozco has shouldered since founding Mexic-Arte nearly forty years ago. According to the Mexic-Arte website, other than the roles of Executive Director (held by Ms. Orozco) and Curator of Exhibitions and Director of Programs (held by Isabel Alexander Servantez III), no other position titles include the words director or manager. Instead, most other positions are listed as “associate,” which gives the perception of a flat organizational structure.

Following the current and former staff’s allegations on social media, Mexic-Arte hired Red Fan Communications to provide guidance on how to address staff concerns. While Red Fan assisted with crafting the Board’s public response last week and also set up an email address to provide current and former staff a direct line to raise concerns, ultimately the company decided to stop working with the museum. Although the museum has publicized this email address ([email protected]), a recent message Glasstire sent to the account seemed to bounce back.

Current board members and Ms. Orozco told Glasstire that they felt Red Fan had not created a clear plan to help them move forward, and that there were communication issues between the firm and the organization. Specifically, the concern was that Red Fan was not relaying some information directly to Ms. Orozco, who select board members felt should have been the point of contact. Rather, Red Fan was primarily in conversation with the now former board President, Mr. Torres, and other board members.

Kathleen Lucente, CEO of Red Fan, told Glasstire, “We are no longer working with the museum. We are big believers in the mission of the museum and I’m excited to see what happens next… I sign up to work with companies where I know that we can really make a difference and in this case I felt like we were not going to be able to move things forward at the pace that we are used to moving things forward.”

Kim Wilson Vincent, who has served on the museum’s board for over ten years and currently remains on the board, explained that it is important for Mexic-Arte to work with a PR firm moving forward, “but the correct firm that will work directly with the Director.”

While Ms. Orozco agrees that the organization would benefit from a dedicated PR firm and a revamping of its HR policies, she maintains that over the years Mexic-Arte has been a training ground for many museum professionals who have gone on to serve in larger institutions across the U.S. She also stated that the issues related to the museum’s current building have been long-standing and are due in part to the historically inequitable funding of Latino and African American cultural institutions.

Ms. Orozco also pointed to the delays in moving forward with plans for a new building, as a bond was approved to support much of the cost of a new space back in 2018, but the contract with the architects was just signed last month. The building’s needs have been publicized before, as the Austin magazine Sightlines reported in 2018: “The upper two floors are off-limits due to structural issues, the lighting and HVAC systems are woefully outdated, and asbestos abatement is needed before any renovation work can begin. The brick building’s foundation is badly deteriorated.”

Along with the resignations of Mr. Torres and Mr. Elliman, other board members who recently resigned include Neil Diaz, Teresa Miller, and Mike Taylor. Losing these five board members constitutes one-fourth of the museum’s board, which now comprises 15 people. 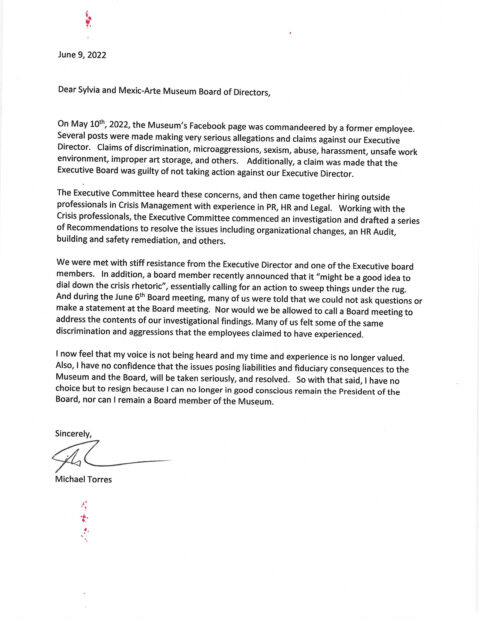 It breaks my heart to hear about this, but thank you for covering it. Something eerily similar happened to another Texas visual arts organization a year ago. In that case, a third of the board suddenly resigned in opposition to unethical and possibly illegal board activity. At the end of the day, it appears there’s very little oversight to most non-profit arts organizations, and so we rely on news publications like Glasstire to shine a light and call it out in hopes that it might help…

Social media is not a proper forum for genuine, legitimate personnel complaints, especially ones made by a former employee, who has nothing to lose and may have ill-will or may even be vengeful. The board reaction of calling it a ‘crisis’ and hiring an outside firm for an investigation is over-zealous. The former board president likely had another agenda and was trying to use this “situation” to achieve his own goals.