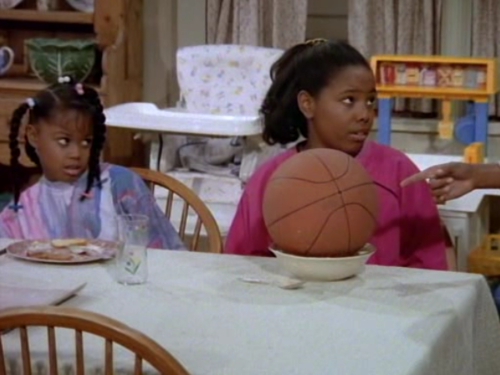 At the end of season four of Family Matters, Judy Winslow waves to her family from the staircase, disappears into her room, and never comes back out. The ‘90s sitcom at the time was facing budgetary concerns and had to cut some of the actors, so there went Judy. The writers of the show didn’t seem to think much of it: simply have her disappear into the house, never mention her again, and soon enough, the audience will forget she existed. By and large, they were right.

Overbearing studio lighting, heavy-handed laugh tracks, flimsy living-room stage sets, multiple actors playing the same character with questionable similarities (Roseanne’s second “Becky” was much more subdued than the first): television not twenty years ago may seem quaint, laughable—even unacceptable—to the discerning taste of today’s viewer. TV today more often respects the visual and auditory sophistication of its audience; many if not most comedies have done away with the laugh track, and shows are increasingly shot on location instead of the confines of a studio. Production values today resemble cinema more than past TV. Whether it’s on a laptop, flat screen, smartphone, or tablet, the average viewer is continuously exposed to visual media, which is making her eye rapidly and increasingly critical.

The narrative content has also evolved—long gone are the days where Bob Saget sits on the side of DJ’s bed for a gentle afternoon lecture on morality. And writers have shifted the moral character of their protagonists fairly drastically. It wasn’t long ago when most shows presented morality in strictly black-and-white terms: protagonist = clearly a good person; antagonist = clearly the bad one. But since the early 2000s, TV has made their lead characters increasingly gray in the name authenticity, and to more effectively mimic the moral ambiguity that is to be human, and to satisfy an increasing demand from an increasingly sophisticated public that a protagonist should not be good; he should be believable. From Tony Soprano to Nurse Jackie, Omar Little to Walter White, we don’t value what is good—we value (and are more enthralled by) what seems ‘real.’ 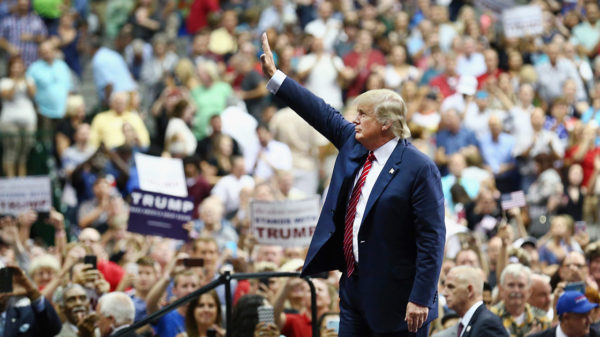 This election has been interesting. For those of us who didn’t vote for him, we are still trying to figure out how Donald Trump happened. How did a gold-encrusted billionaire who takes advantage of a tax code that takes advantage of most people become a populist hero for America’s heartland? How did a man who insulted just about everybody win over so many?

According to politifact.com, Donald Trump tells the truth about 4% of the time. Although with evidence I can objectively say he is a liar, I’ve heard numerous times from his supporters that Trump “tells it like it is.” Because this makes no logical sense, what are we to do with Donald Trump supporters? Throw our hands in the air? Rock ourselves in the fetal position, humming Carrie Underwood’s “Jesus, Take the Wheel?” Lump them all together as bigots who got turned on by his divisive rhetoric? Or rather, does it make more sense to acknowledge—given the American public’s swift and massive internalizing of visual media—that they are instead using another kind of intelligence?

Postmodernism has finally infiltrated every nook and cranny of the American fabric. It’s not that Americans thinks Trump is honest; it’s that they no longer see straight honesty as a reliable litmus test of a person’s worthiness. It’s not that voters think Trump is an upstanding individual—because they assume a president, by definition, is already morally compromised. It doesn’t matter if his rhetoric eerily registers as authoritarian. It doesn’t matter if his views aren’t really conservative but instead a Diet Coke smorgasbord of liberal and conservative ‘policies.’ It doesn’t matter if he sexually assaults women or thinks the key to peace in the Middle East is to take all the oil. To his supporters, Trump represents—perhaps epitomizes—what America now deems its greatest virtue: authenticity. He oozes a counterintuitive vulnerability and a willingness to break all the rules for the sake of being exactly who he is. Americans no longer look for someone to believe; they crave someone to believe in.

And on the contrary, Hillary Clinton reads as the opposite. The emails didn’t do her in. Her sins were her reticence, her stilted voice, the lack of natural cadence in her speech—her inability to authentically ‘connect’ with a larger, cynical audience. It didn’t matter that decades of humiliation, scandals, and intense scrutiny would make anyone more measured and guarded. Of course, articulating this as an argument against someone becoming president sounds ridiculous, so Trump supporters demonized her instead with conspiracies and hyperbole. Again, it didn’t matter that she was investigated and cleared eight times for Benghazi. It didn’t matter that she was cleared by the FBI for her emails—twice. And it didn’t matter that she was objectively more qualified for the job. What mattered was that she always seemed to keep us at arm’s length.

In many ways, actual critical thinking has been supplanted by an emerging visual-media savvy, or ‘intuition.’ Nevertheless, the electoral college has spoken. Instead of othering Trump’s base as the humiliating scourge of America’s collective consciousness, it would behoove Democrats to respect the intelligence of their fellow citizens and respond accordingly with a candidate who comes across as just as much, if not more, authentic than the president-elect. After all, many of these counties in many states that voted for Donald Trump were the same ones that voted for Barack Obama twice.

Over at Art Review is editor JJ Charlesworth`s article Listen to Britain? The problem of trying to figure out how to develop a dialogue
with the Leave-voting, pro-Brexit public has put into stark contrast the remoteness of contemporary art from a wider public. Trump announced that victory in the USA
would be Brexit Plus Plus. The UK pro-Brexiters created a glorious victory writes Julie Burchill .It is also a feminist victory. Morrissey called it magnificent. The entire clone army of mainstream media totally ignores her intelligence and talent on this subject. As does JJ Charlesworth.
In the USA it`s Camille Paglia`s excellent writing about Trump that`s ignored.
The most convinced imbeciles of the age (eg Tony Blair and Bob Geldof) are against Trump and Brexit.
JJ Charlesworth ends his article stating it`s time to have a conversation- to speak, and to listen.
I`ve yet to have an email from him,Liam Gillick,Wolfgang Tillmans or Michael Craig Martin.
In the Uk Brexit got rid of Cameron and Osborne, installed a female Prime Minister and increased membership of Korbyn`s Krazy Kommunists to 500,000.
Unlike artist Cornelia Parker who went catatonic with shock on hearing of Trump`s victory and Anish Kapoor who was all gloom and stingy about Brexit I was delighted by the results. So was my artist girlfriend.

“Nations advancing toward super-industrialism sharply step up their output of these “psycho-economic” products.  Instant celebrities burst upon the consciousness of millions like an image-bomb – which is exactly what they are…

This can be extended, however, into a far more powerful statement: what is happening is not merely a turnover of the images and image-structures in our brains.  Our relationships with these images of reality, upon which we base our behavior, are growing on average, more and more transient. The entire knowledge system in society is undergoing a violent upheaval.  The very concepts and codes in terms of which we think are turning over at a furious and accelerating pace.  We are increasing the rate at which we must form and forget our images of reality…”

Brexit is art. A collectivist political artwork. Therefore Trump`s Brexit Plus Plus is the great American version. Marina Abramovich and Lady Gaga couldn`t instigate such mass activism. At the UK`s Royal Academy online Antony Gormley says he`s ashamed of the 17.4 million pro-Brexit voters. This noble Beautiful Soul is also one of the most convinced imbeciles of the age. (His) 16.1 million Remainiacs didn`t have a clue there were 17.4 million people ready to Vote Leave. So much for his experience of the world. His world being a fraction of the 16.1 million who voted Remain.
He doesn`t mention Trump but I`d expect only the usual clichés. Young Repblican Tomi Lahren (with her gun) makes sense of the world. Gormley adds nonsense to nonsense. Does this make me a white honkey,redneck,fascist,nationalist racist? No. It means I read Camille Paglia. Popular culture expresses what High Art represses (and vice versa).
Give Trump A Chance.

I am on the anti-Trump train and when he won I gave Trump a chance- it lasted until his first cabinet appointment. It’s all been downhill since.

On Monday, a group pf artists and curators – including Cecily Brown, Rob Pruit, Marilyn Minter and Dan Olen – held an anti-Trump rally in front of the New York home of the president elect`s daughter Ivanka. Curators! They stick up explanations and signage all over the walls at Tate Modern that explain nothing. Why pick on Ivanka ? Because these artists and curators are shits (in the Sartre/de Beauvoir sense) ? Keen to join the convinced imbeciles ( like Pope Francis, Hans Ukrich Obrist, and the cartoon -hating Muslims) ?
The gruel-propaganda of the Democrats and Greens lost them the election.
In Pussy Riot`s artvideo ` Make America Great` Nadya plays both victim and victimiser superbly.
Give Trump A Chance Until Summer.
Tomi Lahren says she`ll have his feet over the fire if he doesn`t deliver. Probably at gunpoint too.

Tomi Lahren doesn’t make sense of anything. She simply vomits all the right wing propaganda she consumes on a daily basis. In the Daily Show interview she didn’t have one original thought. She’ll have Trump’s feet over the fire if he doesn’t deliver? Psssh. She needs to keep her audience and her audience won’t let her have his feet over the fire. She’s simply not that brave nor that smart.

Yes, the Democrats need to find someone who can pass the “beer test.” Because it doesn’t matter whether someone lies right to your face, then lies about the lie they were lying about. All that matters is if you feel like you can sit down and have a beer with them. It’s like Mencken said:

On some great and glorious day the plain folks of the land will reach their heart’s desire at last, and the White House will be adorned by a downright moron.

What women does efitz think are brave and smart and make sense of things?
I`d add young artist Akiane Kramarik.
David Hockney says painting is his way of making sense in a mad world.
Tomi Lahren is welcome round at my studio.