Some Inauguration Day Wisdom from Pussy Riot, from their recent Texas Visit 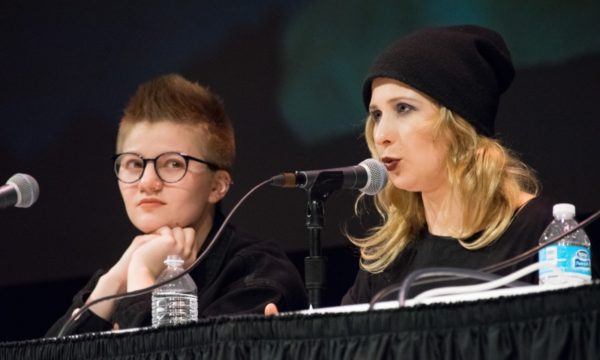 Sasha Bogino and Masha Alyokhina. Image by Leah Voskuil via The Daily Cardinal

In November, two members of Pussy Riot, Maria “Masha” Alyokhina and Alexandra “Sasha” Bogino, were scheduled to appear at Sound on Sound music festival in McDade, Texas. Their talk, unfortunately, was rained out and hastily rescheduled for the same evening at Barracuda, a bar and concert venue in Austin. Two days before the election of Donald Trump, Masha and Sasha spoke to a small but enthusiastic crowd about their experiences living and working in Russia.

The main topic of conversation was MediaZona, a website founded by Masha and Nadya Tolokonnikova that covers issues of prison rights, police violence, and court proceedings—all things that go largely unreported in Russia’s (mostly state-sanctioned) mainstream media. Masha commented on the goal of the website: “We want you to know another Russia. Not the one you see in official media.” Masha and Nadya also founded Zona Prava (Justice Zone), an organization that provides legal and informational support to prisoners and criminal defendants.

During their hour-long conversation, Masha and Sasha, who is a reporter for MediaZona, talked about social media, the persecution of journalists, and Donald Trump. Some excerpts of their talk are below.

Sasha on MediaZona and the Russian prison system:

MediaZona covers specific topics connected to the situation in Russian prisons because nowadays the most important things in our country are going on in a courtroom, and people are being sued every day and investigated…now [the government] gets political activists or performers, but basic people can be sent to prison just because of what they post on Facebook criticizing the government. There are many people in Russian prisons, and Russian prison is a really terrible system. And no one knows whats going on there because it is another world that is closed from the outside world… . We are trying to improve the situation and help. When political activists and performers are being sent to prison, they have a lot of media support and people who will support them, but basic prisoners don’t have anything like that.

She later expanded on the current difference between free speech in Russia and the United States (while also noting that a man in Russia had been arrested for playing Pokémon Go in church):

In Russia, in fact, you can really be sent to prison for what you post on Facebook… if you’re in Russia you’re not allowed to express [your opinions] if they can somehow offend the government or religious officials. In the United States, you can think of your president or the candidates or whatever you want and you can express yourself on Facebook or Twitter or whatever and the worst things you can receive are angry comments, but in Russia you will get a sentence in a prison.

Sasha in response to being asked a question regarding censorship and her thoughts on Trump:

If Trump will be the next president of the United States, which I hope will not happen, the situation in your country will be pretty much close to ours, I think.

During their talk, Masha and Sasha showed a video documenting the story of journalists who were beaten and had their bus set on fire during a tour of Russia’s Northern Caucasus region. Masha on the audience’s reaction to the video:

Living in Austin and watching for the first time films like this—I mean you probably feel that it is a kind of different strange world where strange men with strange beards beat people and burn cars, but actually it’s not. If we look, for example, in our country ten years before, nobody could even imagine [that] it would be [like this] now. This road, this way, from kind of normal discourse to crazy things like this is very short. And this is probably the answer for the previous question about Trump. Because, I was thinking a lot about freedom since I was released… and I’ve understood that freedom does not exist if we are not fighting for freedom.

Look to Russia as an example at some point. Really, you want this example? Of strange guys just setting on fire a bus with journalists for example. Or real discussion of banning abortions in federal law. You want this? Because like if Trump says that Putin’s politics are really close to his, these problems will come to your country also… .

When asked about internet solidarity, and what works for showing solidarity for a cause, Masha responded:

Social media in Russia plays a really important role. It is the only way to communicate and get information without censorship. At the same time, I really believe in a kind of life meetings—demonstrations and events, where we can see each other and talk with each other and see how many of us exist in the real world.

And finally, Masha on the importance of standing up for what you believe in:

When you see a particular case of something you want to stand for, you just have to do it. It sounds very simple but there is a lot of information around us and sometimes people just decide to stay silent because sometimes people do not feel that they really can change something. So I think that we shouldn’t stay silent.