by Brandon Zech May 21, 2016
FacebookTwitterEmail

Lately when looking at video art, I often feel like I see work that drudges along in dull, unfollowable story lines that fail to engage. This is in part due to the quality of the work, but also to our oversaturated, media-driven world in which we can’t pay attention to anything longer than a minute without getting restless. On that note, it’s unlikely that an artist can entice the average viewer to sit through a 50-minute deluge of information (looking at you, Ryan Trecartin), no matter how objectively good a video is. If an artist is making a time-based work, it might behoove them to work smart rather than work hard. And two Houston-based artists, David Politzer and Bradly Brown, have videos on view now that circumvent the narrative trap by doing exactly this. 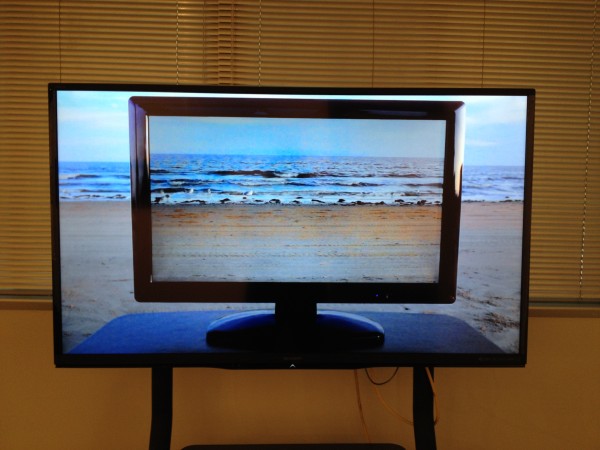 Politzer’s seven-and-a-half-minute video Surfside is currently on view in the show You Are Here at Texas A&M’s Wright Gallery. The video shows a beach scene that is interrupted by the presence of a monitor live streaming the view it is obstructing. Simply, it puts into reality the much-repeated criticism that screens (phone screens, computer screens, television screens) are our society’s mediating factor. We can’t see reality because of them, we can’t see anything past them, and we see everything through them.

There isn’t that much going on in the video. Occasionally, a solitary seagull flies by or a group of walkers wanders in front of the camera. The waves go in and out with the tide, and the video is mundane—there is no narrative, nothing to follow, and you can come and go from the video as you please and expect everything to be recognizable once you return. But there’s something more complex going on here, in that Politzer is taking the time-based element of video art and turning it on its head. Nothing actually happens in this piece. Much like some of Warhol’s earlier movies, Politzer defies and denies the moving image entirely by displaying a static monitor with a relatively static landscape that, on its own, isn’t interesting. You don’t even need to see the video in situ to understand this effect; just look at the photo above and play this YouTube clip of ocean and seagull sounds, and you’ll have (fundamentally) the same experience I did when viewing the work in a gallery.

As with Warhol, this isn’t a bad thing. So many video artists nowadays are making art that is explicitly influenced by technology. Don’t get me wrong: I adore the work of Hito Steyerl, Jacolby Satterwhite, and Ryan Trecartin, but Politzer’s video works differently. It’s subtle about the properties of “the screen”—and it isn’t in your face about the degradation technology is causing on our culture. It emphasizes and even takes pleasure in the futility of trying to capture the attention of an on-the-go audience within a gallery space that doesn’t offer any form of seating. But the contradictory quality of the piece is that the video engages and hypnotizes you more fully only if you give it time. It doesn’t do the work for you. And I like that. 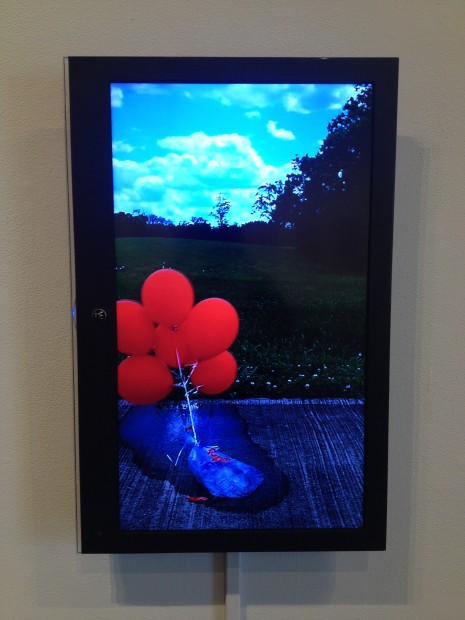 Bradly Brown’s video Failure to Launch, currently on view at Lawndale Art Center, similarly manages to escape the narrative trap. The work is over an hour and a half long and shows a landscape that, in the foreground, features a bag of ice attached to balloons that are blowing in the wind. When coming across this video, you have a particular thought process: it’s obvious that the bag of ice is too heavy to be lifted by the balloons, and Texas (where the video looks to be shot) is hot, and you realize the ice will melt. But you also realize that you don’t want to stand in front of a vertically-oriented monitor for 90 minutes to watch a bag slowly rise and eventually float off into the distance. And you wonder if that mythical takeoff will even happen, since the video is titled Failure to Launch. So, ultimately, you decide to move on.

Brown’s video is so futile and so perfectly conceptual that you immediately dismiss it (in a good way). The work has more narrative quality than Politzer’s—something might actually happen to the balloons and ice— but this is more like a show playing in a waiting room. Like an exotic fish tank. You’re interested while you’re there looking at it, but as soon as you’re called away, you realize you don’t really care about how it ends. And that’s okay.

Of all the art videos I’ve seen,  Brown’s piece is only the second time I felt like I didn’t have to watch a video in its entirety before I wrote about it; the first time was Politzer’s Surfside. Did I miss something, some major payoff, in either of the works? Possibly. But I don’t really care, because I saw all I needed to see. Neither of the videos were asking me to spend time (physically) watching them; instead, they were just happy to get me to think about what they were implying about time, mediation, and attention. And in that realm, they are both wildly successful.

You Are Here: Texas Photographers Respond to the Texas Landscape is on view at Wright Gallery in College Station through June 2.

how2magpie is on view at Lawndale Art Center in Houston through June 11.

I appreciate getting a sense of the work these artists are doing, and the discussion of diverse uses of the moving image medium, but I think I might re-phrase this “narrative trap” as “looping video in a gallery trap”. When screened in a setting where people agree to a social contract of sitting and watching a whole video, this isn’t the same kind of issue. No doubt, seeing an hour and a half screening of Ryan Trecartin is a serotonin drain, but less so when you and 30 other people have intentionally set aside that time to do so rather than having 2 hours to see a whole show, and having to decide whether to invest that in a long video or get to see everything else. Sorry, preaching to the choir I know, you just touched on one of my soap box issues.