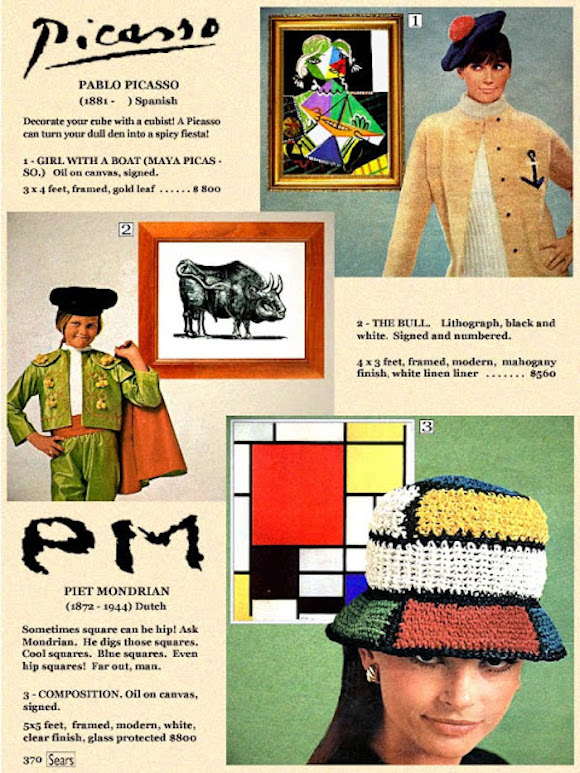 Sears catalogue page from 1963 or 1967. Image via culturalghosts.blogspot

On Christmas Eve, The Wall Street Journal published a piece about the future of the department store. With the popularity of online shopping, some are trying out new and unique ideas to save the stores. The Journal reports many examples, including this one from Texas:

In Plano, Texas, a company called Neighborhood Goods last month opened what Chief Executive Matt Alexander calls a new type of department store that sells products from furniture to sweaters and hosts events. Everything in the store is for sale, including the art on the walls, the cutlery in the restaurant and the chairs in communal spaces.

Art from the walls? In a department store? Glasstire’s Brandon Zech and a few other people from online journals and blogs are quick to point out that the concept of art galleries in department stores is far from a new idea. Artistsnetwork.com points to the The Vincent Price Collection at Sears included gallery paintings and other works by Rembrandt, Chagall, Picasso, Whistler and many contemporary artists of the day. It included a watercolor by Andrew Wyeth and a painting by Salvador Dali commissioned by Price. While the price tags for these painters’ works add some questions about their authenticity, Artistsnetwork also think that some were legit, so at least a few shoppers in the late 1960s got some real bargains.

An amateur sleuth at culturalghosts.blogspot.com digs into several examples, including two prints by Goya from his famous series of etchings called Los Caprichos:

Unscrupulous publishers churned out prints like this long after Goya’s death, and even though they used the original printing plates, they did so without Goya’s permission.  This flooded the market with unauthorized editions that degraded in quality as time went on.  The problem is so rampant that when you Google it, “Goya Caprichos forgery” autocompletes before “Goya Caprichos.”

Below is a video made by Sears with Vincent Price describing the collection.

This is magical. Thank you for sharing this. We were watching Poe stories tonight and Vincent was telling them.
Happy New year.

I just came across a Chagall print during an art appraisal house call. It had Vincent Price’s signature on the back. I asked my client about it and she told me she purchased the print at an event at Sears in Houston hosted by Price in the 1960s. I loved seeing this article, and especially Price’s advice on selling art in the video!

In Japan, for as long as there have been department stores, there have been art galleries inside of them showing the best and the brightest of Japanese fine art and fine craft from living (and a few dead) artists.

All the work is for sale and usually all of it sells, especially the work of ceramic artists, whose work and the collecting of it, is taken very very seriously in Japan.

There is also an American chain that has a name similar to Urban Outfitters but is more grown-up and feminine. Their Dallas branch in Northpark Mall is a hideous dull thing, but their flagships in NYC and Cali both have large gallery spaces that show ‘decorative’ art and craft in a modern setting that is very appealing and has really promoted and benifitted the artists shown.

It’s not a new idea. But anything that gets Art out of the segregated gallery districts and into the eyes of the maddening crowd, is a good thing.