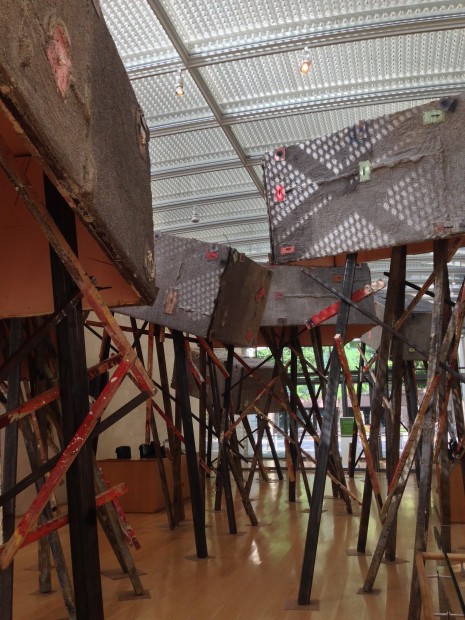 The art world’s sudden interest in sculptor Phyllida Barlow’s work is long overdue. Until recently, Barlow was best known among fellow artists for her distinguished teaching career at the Slade School of Art in London, where Rachel Whiteread, Martin Creed, and Tacita Dean, among others, count themselves as her alumni. Barlow’s artistic career, however, has gone relatively unnoticed for the past four decades. The 71-year-old British artist makes large-scale, brutally messy, site-specific installations out of readily available materials (fabric, felt, burlap, and anything that could be found at Home Depot). Whether wrapped, stacked, hung, or scattered, Barlow’s works have utilized an impressive array of sculptural approaches that celebrate the asymmetrical, the unbalanced, and the unglamorous.

Barlow has come a long way since her first major exhibition at the Serpentine Gallery in 2010; for the first time, her pieces are surviving long enough to be shown more than once. Until now, the practical impossibility of finding storage for works of such magnitude has driven her to dismantle and repurpose her sculptures after each installation, rather than shipping them intact to their next show or to a home in a permanent collection. This cost-efficient, foraging practice ensures that she always has materials on hand in the studio. Barlow does not work to materialize a premeditated image, but rather dismantles and rebuilds the materials before her to see what shapes will come of it. To Barlow, the subjects of her work are the materials from which they are made, the processes by which they are made, and the spaces they are designed for. 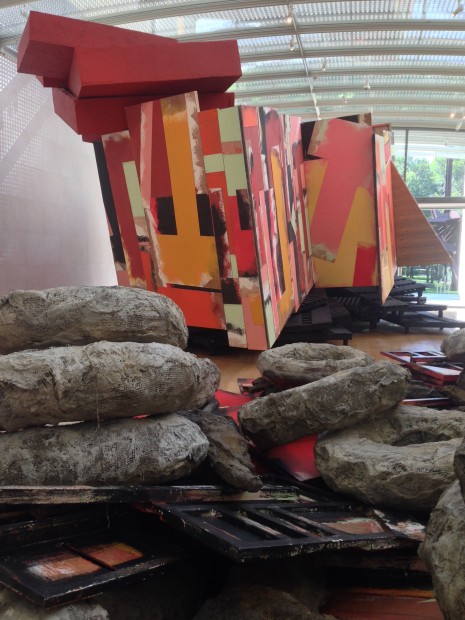 I don’t know the particulars of how Barlow invades every space she is invited to (recently, Tate Britain, Hauser & Wirth, the New Museum, and Ludwig Forum für Internationale Kunst, to name a few), but she designed each of the six installations currently on view at the Nasher Sculpture Center—in a solo exhibition titled tryst—ahead of time. She partially made them in the studio with her assistants, and then shipped over their parts to be reworked together upon arrival. (Disclosure: I assisted the Nasher’s curatorial department in research for this exhibition.) The primary ‘tryst’ referenced by the show’s title takes place between Barlow’s installations and the Sculpture Center’s Renzo Piano-designed building. The two have a symbiotic relationship that manifests in a respectful tug-of-war; tryst is the most crowded show I have ever seen at the Nasher. Extending into nearly every nook and cranny of the space, this exhibition could easily be the handiwork of a prankster who gave Barlow the wrong dimensions, or maybe delivered the crates to the wrong museum. But tryst is an excellent kind of confounding, and it ultimately fits just right.

Under normal circumstances, the Nasher’s parallel galleries politely direct our trajectory through its halls; like any good pedestal, the building itself goes undetected and exists primarily to complement the artwork. But tryst manages to dissolve the divide between environment and object. Born from Barlow’s anxiety around confronting the Nasher’s pristine building, the six installations elbow through the Nasher’s halls with cacophonous force. Order and disorder collide with gleeful brutality to completely reroute our movement and redirect our attention to the building. 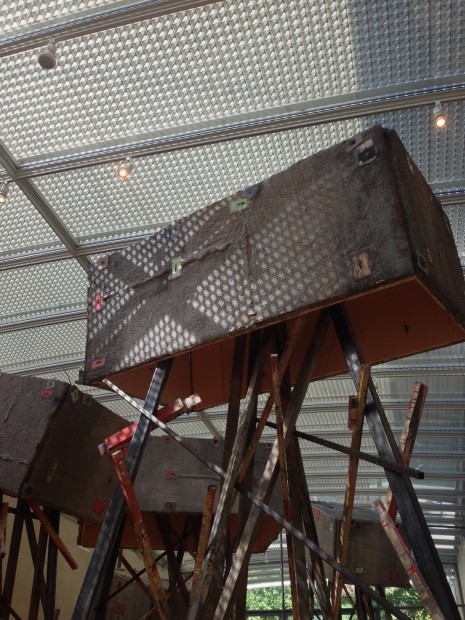 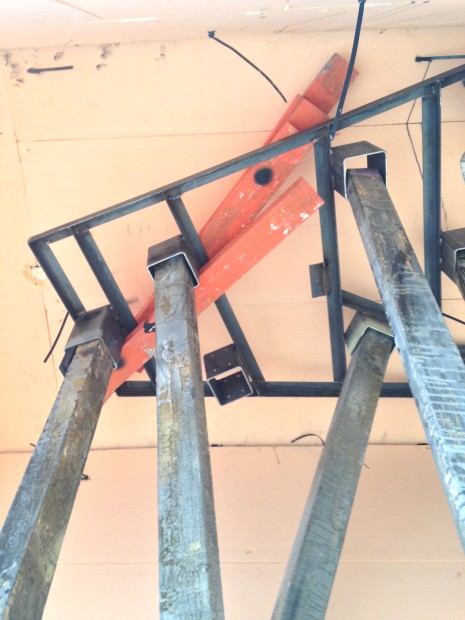 looking up into a stilted crate

The traditional display of artwork in the context of a museum nurtures a passive and easy viewing process. Barlow wants us to try harder. Her massive and unsettling sculptures ask us to look beyond eye-level; she designs her sculpture to be completed by the viewer’s movement, so without our physical involvement and active participation, the work is literally incomplete. Upon entering the museum, visitors are greeted by a herd of eight top-heavy structures precariously lofted overhead and reinforced, or perhaps merely decorated with, painted slats of lumber. untitled:stiltedcrates2015 invites us to gaze up into the interior space of its bucking and bowing boxes carpeted in cement barnacles. From beneath, one can study the exposed pink underbellies of the creatures, a jumble of polystyrene and plastic fastenings left blatantly unfinished. Walking beneath these stilted crates elicits a fight or flight response. You don’t want to wake these frozen giants.

Back toward the end of the first gallery are three intimidatingly large shapes: meatball lumps whose fleshy bulges are penetrated with metal rods and cardboard growths. 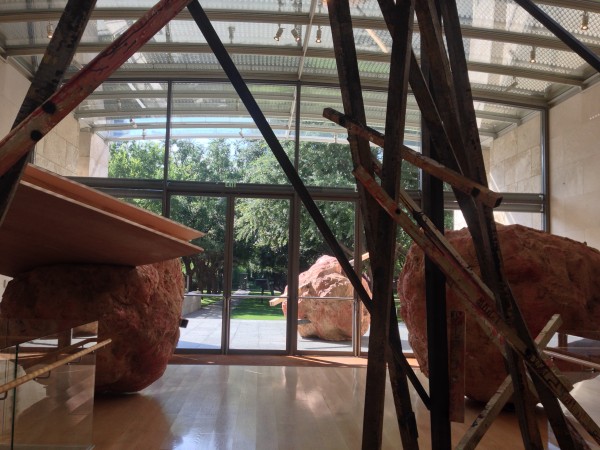 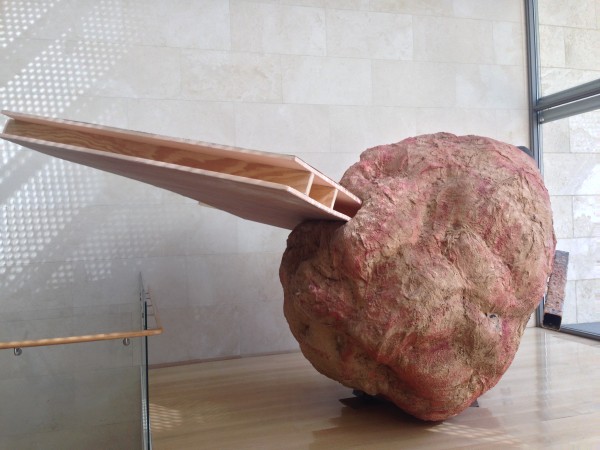 Two more large, colorful, and materially complex installations are in the next gallery, where the foreboding slouching and imbalance continues. One part of a stockade has succumbed to gravity, where swollen hoops swaddled in leathery skin (scrim showing through thin washes of gray paint) evoke the ghostly presence of discarded tires scattered along the highway, or perhaps a sluggish swarm of beached seals. A leaning stack of bony semicircles, made of polystyrene, plaster, scrim, cement, and sand, threatens to topple. 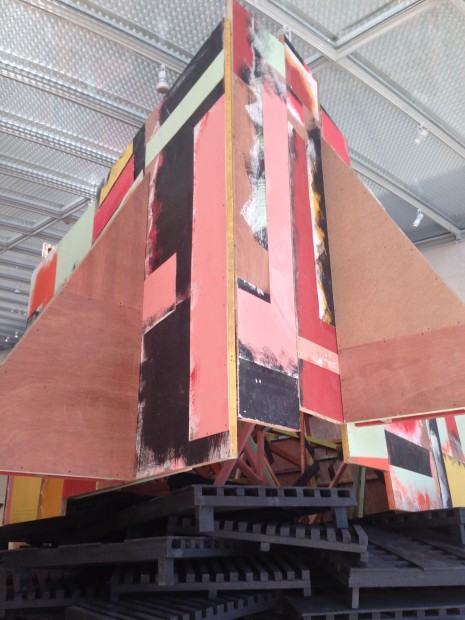 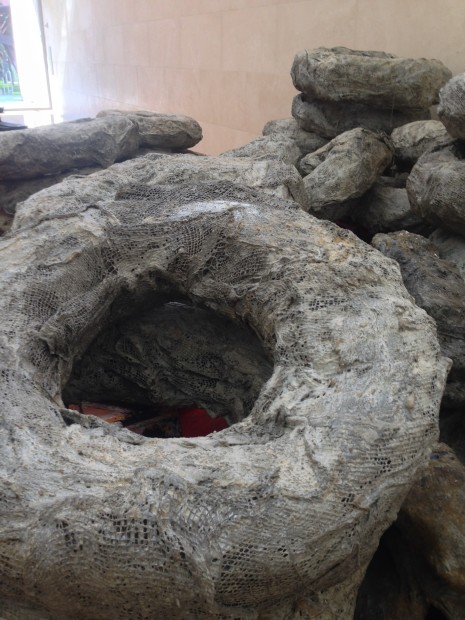 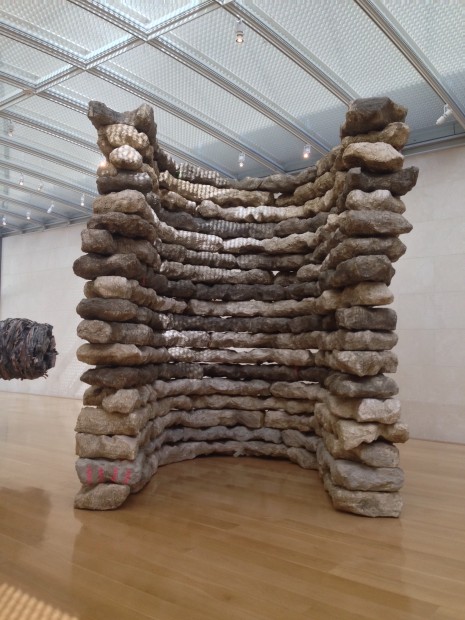 It’s hard to tell whether untitled:hangingmonument2015’s series of overlapping painted panels envelops or is supported by its neighboring steel cross structure from which an oversized, mummified and phallic oblong mystery hangs. 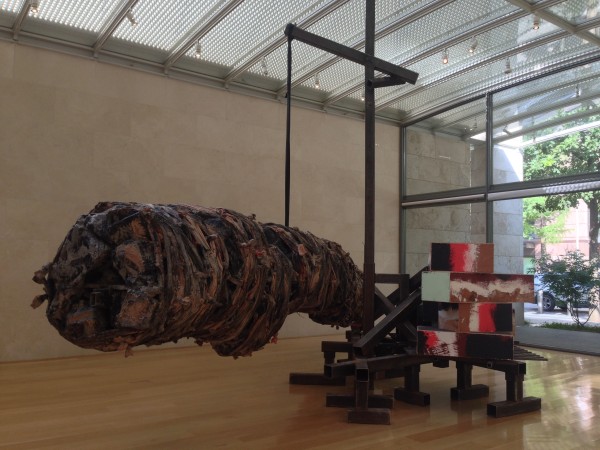 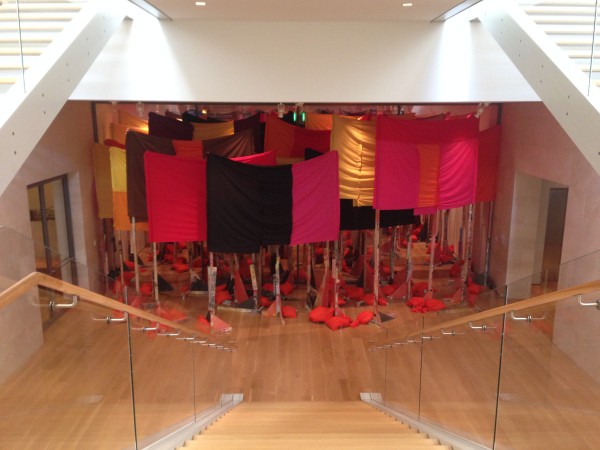 Perhaps more than any other installation in the show, untitled:100banners2015 invades the space it inhabits. From the top of the stairs, an army of colorful flags returns your gaze; it spills out from the Nasher’s lower gallery. Spindly plywood legs touched with paint are bound together with irregular swaths of stitched color fabric. If their plywood feet weren’t weighted with cautionary orange sand bags, the ramshackle banners would collapse into a splintered crashing domino effect. Barlow leaves no obvious path; one has to invent a way of moving through. This guarantees no two people will have the same experience, and makes viewers conscious of their bodies’ positioning in relation to the installation at every second.

Barlow never intends for her objects to have any literal associations. She is honest, though, about finding inspiration in existing things, “both natural and man-made, rural and urban, in an ambiguous state of decay or regeneration,” that, as she puts it, “perform sculpturally…. [and] despite their banality and familiarity, block and interrupt how we experience our daily encounters with the world.”*

Phyllida Barlow’s ‘tryst’ is on view at the Nasher Sculpture Center through August 30.