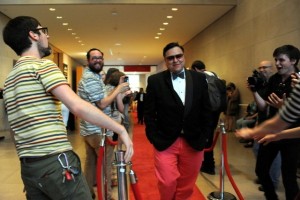 The Nasher Sculpture Center has announced the details of the sixth of ten projects for its 10th anniversary, citywide sculptural exhibition Nasher XChange. Denton-based Good/Bad Art Collective, most active from 1993-2001, will create a project entitled CURTAINS to be part of a one-night event at the opening of the XChange exhibition, which will run from October 19-February 16.

The Good/Bad will create a 28-minute infomercial to be filmed in an empty-floor-turned-TV-studio in the 40-story Bryan Tower in downtown Dallas. Opening night visitors will have a chance to participate in the filming of the infomercial, which will be aired in less-than-premium time slots on local and national channels. The Bryan Tower space will remain open for viewing throughout the exhibition, displaying documentation and objects from the filming and the opening night.

The Good/Bad recently reunited for the Dallas Art District Block Party in late June to present “Fashionably Late,” a performance art piece about celebrity obsession, which served to create anticipation for their October event.