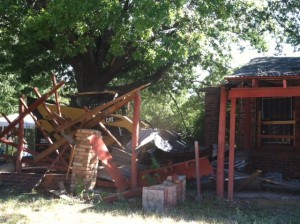 The Nasher Sculpture Center announced its ninth of ten projects to be commissioned for the Nasher XChange exhibition coming this fall in celebration of its tenth anniversary. The project by Spanish artist Lara Almarcegui, whose work focuses on ever-changing urban areas and the “post-industrial landscape,” will be called Buried House. Demolition has begun on a boarded-up home on Dallas’ Exeter Avenue; the sculpture will be created from the building’s rubble at the site.

The Dallas Morning News spoke with a neighbor Della O’Neil, who said that these boarded up houses attract criminals to the area. “This is long overdue,” O’Neil said. “I am absolutely thrilled. Once they do something it’s going to put this little street on the map.” After the Nasher XChange exhibition closes in mid-February, Habitat for Humanity will build a new house at the location.

Details about the tenth and final project, by Rachel Harrison, will be announced later this week at Dallas City Hall.