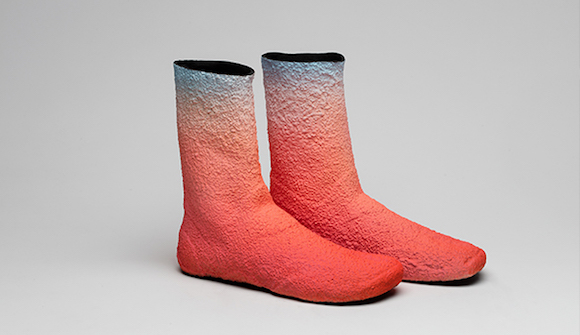 The Nasher Sculpture Center in Dallas just announced some new acquisitions for its collection: gifted works by Julian Hoeber and Alex Israel. Via Nasher: “The work of these California-based artists represent notable ways in which a new generation of artists practicing today expand upon the modernist foundations of the Nasher Collection.”

Negative Space of Double Wall by Julian Hoeber was gifted by the Green Family Collection. Hoeber has not had a solo exhibition at the museum. The work is described as presenting “an irregular rectangular prism sliced at various angles, creating a dynamic three-dimensional object that changes dramatically at each face.”

Alex Isreal had a solo show at the Nasher last winter. The four works of Israel’s most recently acquired by the Nasher were in that show, and donated by the VIA Art Fund and a private collection. Self-Portrait (Wetsuit), Cap, Glove, and Booties might better be recalled as ‘the wetsuit’—and is “related to the artist’s first feature length film, SPF-18, which explores the genre of the teen surfing movie, using visual and narrative conventions common to the after-school special… .” Another Isreal work, Sky Backdrop, was promised to the Nasher in 2015 by Christen and Derek Wilson.

The Nasher had fairly recently announced other big acquisitions via the museum’s Kaleta A. Doolin Acquisitions Fund for Women Artists. All of these works are on display at the Nasher through February 12, 2017. For more info, go here.