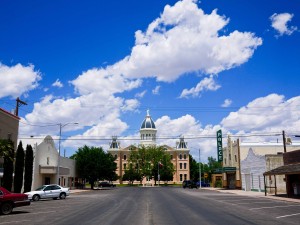 Tim Crowley, Marfa’s own BMOC (philanthropist/owner of the Crowley Theater/former president of the Chinati Foundation), is in the process of building a new four-story, 55-room hotel in the middle of the town on El Paso Street, right near the railroad tracks. It’ll be called the Saint George, and the target date for opening is the end of this year. Currently construction is in full swing.

The new hotel would, as residents hope, pre-empt the building of a national chain hotel or motel. (For some time there’s been some understandable dread amongst locals that a La Quinta or Marriott-type monolith could mar the singular feel of the center of town.) Marfa has been ripe for more hotel rooms for some time, and the old standbys such as the Thunderbird, Hotel Paisano and El Cosmico are often booked solid months in advance year ’round. (Even the last week of April.)

There has been some administrative back and forth over building height and parking, but as of now the plans are moving forward. Houston architecht Carlos Jimenez is involved. Expect clean lines and thoughtful attention to light and climate.

Crowley has been tight-lipped about some of the particulars about the hotel so far, but we know the following, via the The Big Bend Sentinel: It’s on the sight of a former hotel named the Saint George, which was torn down in 1929. The ground floor will house the Marfa Book Company (temporarily relocated to the Lumberyard during the hotel’s construction) as well as a restaurant, bar, and pool, and Crowley is maintaining that the room rates should remain competitive with other hotel rates in the town. Marfa Public Radio, also relocated during construction, has taken up permanent residence just a couple of blocks away from its old headquarters.

meh.. the story here is money, not vacancies. the motel in alpine is just fine.