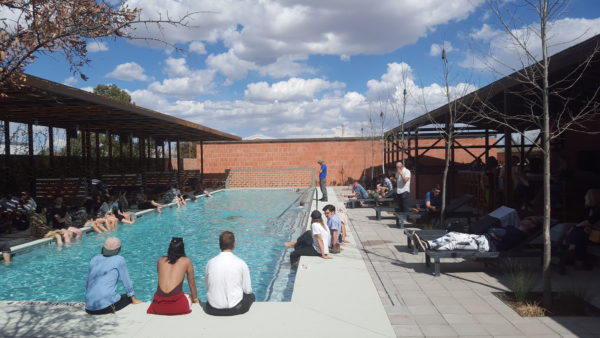 Poolside at the Hotel Saint George. All images: Sam Green

Part 1 of this series appeared yesterday.

We couldn’t get it together for lunch in time. Despite a surprising number of upscale dinner restaurants, day-time eating in Marfa is hard. It often feels like a Buñuel film: it takes four hours for them to tell you they are out of everything. We headed over to the new Saint George event space complete with an outdoor pool. The Hotel Saint George, in the center of town, is beautiful, upscale, and austere. The restaurant is expensive and excellent, and the beloved Marfa Book Company is now its gift shop. It is an eminently tasteful establishment, and yet I wonder how long Marfa can remain “bohemian” as it increasingly gets more lux. This is a microcosm of the peril of everything cool.

We waited in line and a long train roared past on the nearby tracks, magnificently bombed with tags from the cities it had passed through, blurring into one mass not unlike the contorted metal John Chamberlain sculptures down the street. Julia Holter first performed alone on a piano. Elegant and commanding, Holter recalls such titans as Catherine Ribeiro and Annette Peacock in blending a chanteuse sheen with rigorous and experimental artistry to create something akin to true regality. Her partner, the refined musician Tashi Wada, joined her on sublimely subtle Moog for the final two songs.

Next was the reason I came to Marfa: the god Pharoah Sanders. 76 years old with a cloud-like beard, Sanders has the gravitas of a shaman with actual supernatural powers. His band had a somber nobility to them, an awareness that his level of musicianship is rarefied and precious. They easily floated from standards to shimmering sky tapestries. The only hitch was that one of the winners of the Too-Turnt Award (there were two on Saturday) was there, a woman in her forties in a tank top with the phrase “under a spell of joy” on it, shimmying through the crowd barefoot, wooing and grinding on other audience members (one person snapped at her: “Stop touching me!”). However, a midlife-crisis day-drunk is no match for a wizard.

After waiting what seemed like the duration of a Béla Tarr film for some bar nachos, we returned to camp and I took a nap in a hammock before waking at twilight as red rows of glassy clouds hung in a thin purple expanse. Just like Dan Flavin, I thought. One of the magical things about Marfa is the way nature becomes art and art becomes nature. The people who made the town a weird art outpost weren’t just megalomaniacal, alpha cranks. An aesthetic ecosystem lives out there like a grove of redwoods.

We headed over to The Capri (the bar and event space of the Thunderbird Hotel) for the showcase of artists presented by the breezy Brooklyn label Mexican Summer. Our running joke of the weekend was then prominently solidified: simply, that Marfa fucks. By that I mean, nearly everyone at the festival was so attractive and confident that it seemed they use Tinder with the effortlessness that the rest of us plebs use a ride-sharing app. There were men with manbuns and beards and large Adam’s apples who looked as if they should reek but smelled pleasantly of sandalwood, women wearing with aplomb those high-waisted mom jeans that are en vogue (and are unflattering on most people). In my North Face hoodie, I felt a bit like Shrek, but everyone we talked to was unfailingly pleasant. One sign of truly cool people is that they’re pretty nice. 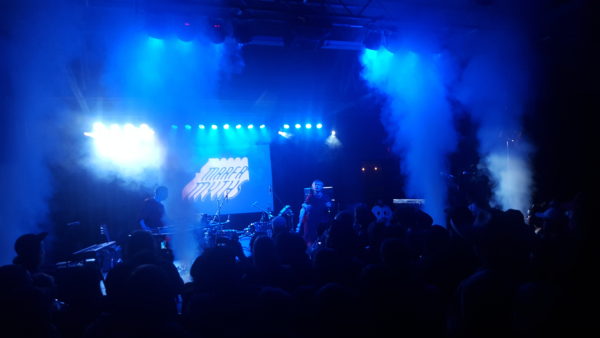 The highlight of the showcase was the incandescent Jenny Hval. Calling the diminutive and ethereal Norwegian a “singer-songwriter” is reductive. Her last two astonishing albums (Apocalypse Girl and Blood Bitch) established her as a bracing visionary; they recall angry and inventive new-wave films like Goddard’s Weekend. In performance, she had an indelible swagger, how I imagine a young Bjork in the early ‘90s was in concert. She delivered extended spoken-word segments that were mesmerizing. She theatrically and rhythmically fake-cried and huffed as if on an interminable run. She sang icy funk over massive dub beats. She fucking rules.

The second winner of the Too-Turnt award for Saturday was a supremely-hammered bro dressed in normcore clothes like mine who leaned back and fell into a fountain, floundering briefly before grasping a ledge and gasping “oh fuck!” Once he pulled himself out, he sat down, sopping wet in feigned nonchalance before a security guard (probably wisely) asked him to leave. It was a jarring and honestly hilarious moment, but melancholic too—such bright symbolism under a full moon. We are all that bro most of the time, soaking wet while pretending we haven’t just almost drowned in a two-foot-deep fountain.

The wind picked up, ending the unusually warm weather spell, and TS and I listened to drone, psych-rock and experimental techno in the Impala until we were tired enough to sleep in our windblown tents.

The last day of a festival is like the last day you’re in New York or San Francisco or New Orleans. Exhaustion and dread intermingle, and the real world looms like an oil refinery in the distance. We packed up, sunburnt and glum, and waited for a serviceable pizza for two hours (there was the amusing recurrence of watching people walk in, receive word that the wait for a pizza would be at least three hours, and then shamble out in desolation). We then headed back to the Crowley Theater for the final performance of the festival. First, a few charmingly eccentric shorts by the Marfa Mystery Channel were screened (drone playing over close-ups of crawling bugs under a tarp; a slow-motion loop of a train passing a raincloud at sunset). Next was a preview for the impish New Zealand musician Conan Mockasin’s absurd “sitcom” Boston and Dobsyn. I was expecting just a screening of some bonged VHS tomfoolery, but then the screen lifted and Mockasin and his band played a set of pieces that resembled some chill psychedelic Steely Dan Aja sessions. I’m not super high on Mockasin on record, who like Ariel Pink has a sneering bitter quality that curdles his gauzy tunes. But in person he had a quirky appeal and was a bonafide, unconventional shredder. The Too-Turnt Award for Sunday went to a group of women who were dressed like pirates in a Robert Downey Sr. film (one of them appeared to be wearing an eyepatch for fashion purposes). They were lit and rowdy and seemed to have no idea what was going on. I sort of thought they might have been part of the show (TS disagreed). 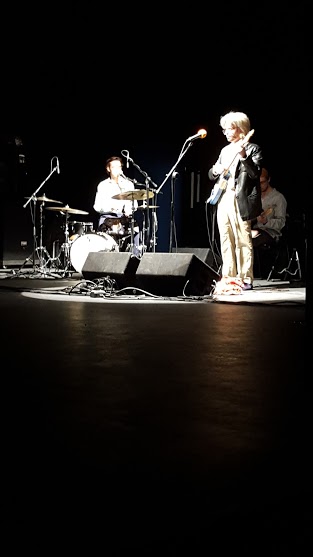 As much as we wanted to see the Buchla samurai Kaitlyn Aurelia Smith, it was nearly four p.m. and an urgency had come over us. The thought of arriving home at midnight and then going to work at eight a.m. was too much for our weary souls to bear. We got on the road during the magic hour, and driving home I realized that for a few days I hadn’t really read the news, hadn’t really felt afraid, hadn’t really felt enraged. Something wonderful had taken place over the weekend that was elevated and positive. It was not particularly “political,” but there is a rejuvenating power to participating in something beautiful. What I’m saying is I hope you enjoyed this recap, because I will be covering every single Marfa festival from now on.

Feeding Frenzy (for a Good Cause)

Great read- If you want to come to a festival where it’s all too easy to day-eat, come to the High Plains Print + Music Fest at Lubbock this coming weekend! #dustcoast #wegohigh #sortaturnt