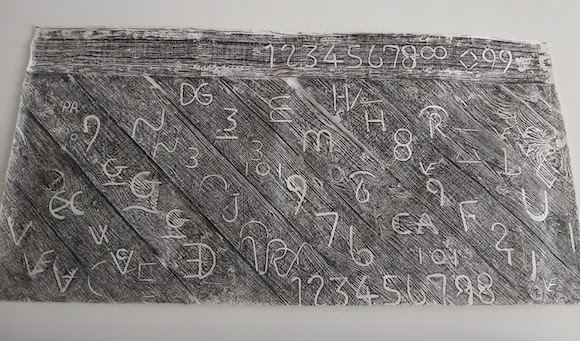 En route to New Mexico (my spiritual, pre-pre-pre retirement home) I made one of my bi-annual stops in Marfa, which with each visit becomes more lacquered and gleaming in its calibrated aesthetic, like the afternoon light off one of Donald Judd’s aluminum boxes. The clouds bloom in marble, the shadows hang low and wide over the green high desert. If you wanted to open a store in Marfa, call it Husk, or Brush, or maybe Brusque, and sell perfumes the color of bourbon that smell like burning desert herbs, wallets with ourobouros stitched on them, some boxy patchy denim, perhaps a copper pentagram, and books titled something like Psychoactive Cacti of the Southwest. Despite being fairly built up and lux, a kind of artier southwestern Palm Springs, Marfa on non-event weekends feels somewhat understaffed. It seemed as if every boutique store in town (Mirth, Freda, etc.) were all run by one harried Marfa woman, running back and forth between the stores, leaving posts on the windows: “Back in five.”

Let’s take a quick breeze around town and catch some of the current art at some galleries and boutiques. 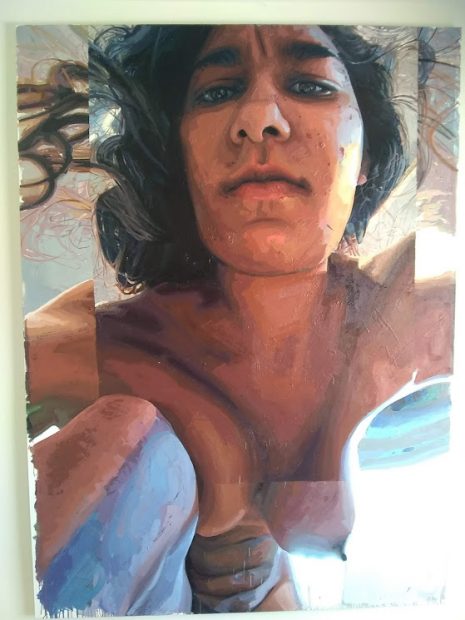 In a bracing and stark contrast to minimalist and abstract works that dominate much of the gallery space (and the minimalist mecca Chinati Foundation), Hammie’s large-scale portraits are simultaneously expressive and photo-realistic, capturing moments of complete vulnerability and resilience: a birth scene, a woman undressing, a weathered face. Hammie’s pieces hit like an altercation with a stranger on a subway — someone screaming at you that life’s not fair, or to be better — and you don’t shake it for days. 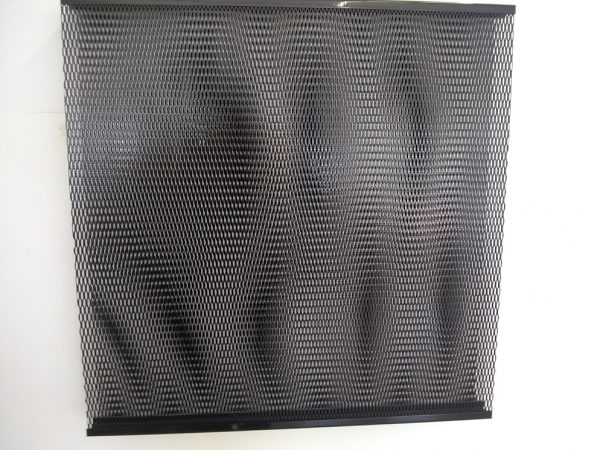 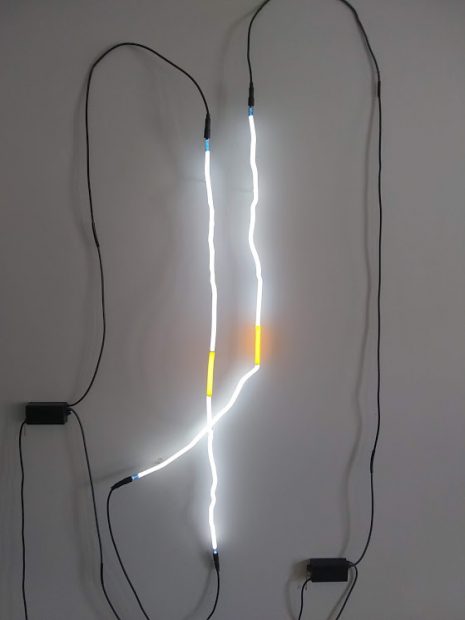 The boutique Mirth seems like a relatively new boutique/store/gallery in Marfa, although it’s hard to tell. It seems like these  Marfa boutiques cycle through with subtle variations — once was Myrrh now is Mirth; next is Mise, and so on. Mirth was displaying a few recent works of Marfa legend and true esoteric freaq Rob Mazurek. Mazurek is a musician, writer, and artist, with a wry and irascible sense of humor (he made some hilarious fake ink-roll posters during Marfa Myths). Mazurek uncoils the rigidity of Flavin’s neon and lets it loose, like a snake left as a curse in a tree, and turns the notation into some etched rubbings of mysterious hieroglyphics. 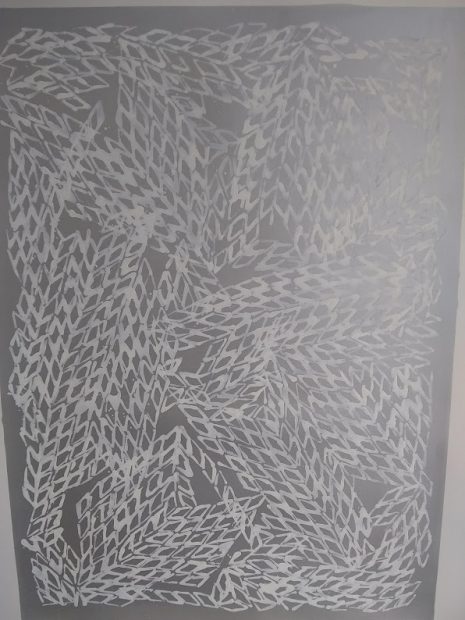 A print by Valerie Arber

I’ve been going to Marfa for 15 years and have somehow never seen, until this last trip, the excellent gallery and press Arber & Son. Run by the charming couple Robert and Valerie, the gallery includes the elegant and glacial works of Valerie Arber — repeating serpentine patterns that have elemental qualities like cave paintings, as well as gorgeous limited edition artist books (many of them Chinati residents) of prints commissioned by Arber & Son. In the back studio, filled with vintage motorcycles, Robert showed me an amazing collection of pieces, including works by Bruce Nauman, Terry Allen, and 300-year-old Japanese design books that are startlingly modern. Arber & Son reminds of why I love the Southwest and all the gentle eccentric people that do things like buy an old movie theater and fill it with treasures.

His name is Robert Arber, not Richard but yes, definitely great work to be seen at Arber & Son. # 1 Valerie Arber

Hello this is Rob Mazurek. The top photo is the work of Beau Buck from Mano Mercantile. My neon work (which you have correct) and some paintings are up at Mano Mercantile as well. Also lithographs and paintings at Marfa Book co…. Not Mirth. And I am not the person who put up fake ink-roll posters during Marfa Myths, although I did perform at Marfa Myths. Not sure if I have a “wry and irascible sense of humor…” … . but maybe…. Just to clarify. Thanks for the interesting words none the less. My web site is in construction at the moment, but here is my Facebook page. https://www.facebook.com/robmazurek