For your casual weekend perusal, if you wish, here is a set of quick responses I had to some (though not all) of the shows I saw in London last week.

I concentrated most on the downstairs Super-8 film/video projection; McQueen is now an Oscar-winning, big-budget movie director but of course he can still do gallery-based art. It’s a looped short—a portrait of a young man balancing on the top of a small, bobbing boat in a beachy harbor. The soundtrack is several people’s spoken recollection of this man and how he came to an unexpected and violent death; it sounds like a terrifying end at the hands of criminals. Time spent watching is a quick and unsettling journey: You start the experience by smiling along with this carefree, charismatic soul who’s enjoying his day out in the bright sunshine and flirting a bit with the camera, and minutes later while looking at the same footage and listening, you end up feeling a terrible loss when it dawns on you he’s just… gone. 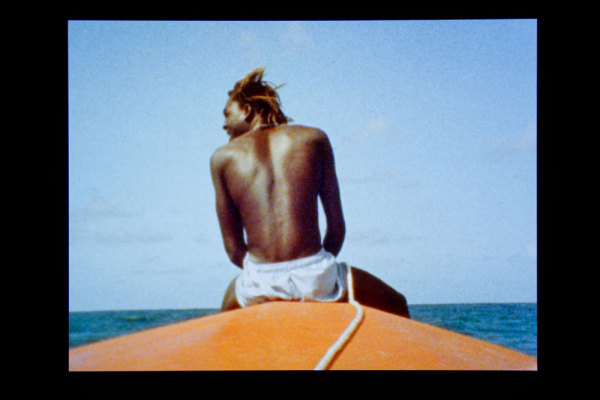 Rembrandt: The Late Works at the National Gallery:

Despite the dense crowds (the museum’s crowd control consisted of strictly timed tickets; the crush was still overwhelming), Rembrandt’s profound sympathy for his sitters and his ability to imbue psychological depth in faces, including his own, is unmatched. There is more humanity in one Rembrandt face than there is in the full oeuvres of some other historic portrait painters, and the “experimentation” in his late work makes some of it feel entirely fresh and modern. This is one of those international blockbuster shows that you wonder about before you get in: Will the crush of people be worth it? And the answer here is a resounding Yes. They would’t allow photography and photos don’t do the work justice. Here are a couple of details anyway. 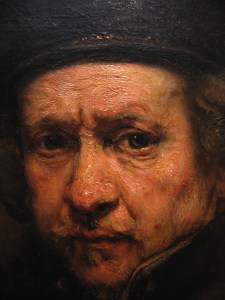 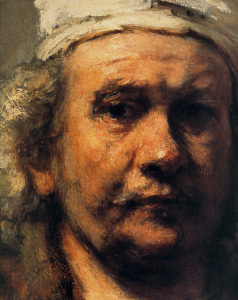 Here’s an unsettling fact: A reliable source told me you can buy an actual sketch by Rembrandt for less than it cost to buy a Christopher Wool painting.

These are fully inhabited paintings, with the subjects relaxed and unselfconsciously going about their lives, as though casually caught on camera (often looking straight at the viewer), though here they’re also engaged in daily domestic, studio, or celebratory existence; i.e. they’re in a ‘flow’ that comes from feeling at home with life and self. As we know with Marshall’s work, there’s a fantastic and purely visual push-pull in perspective as well, where some areas of the paintings are given the full illusion of depth, and others take on a flat, abstracted collaged effect, with wonderful color, shape, and pattern, and it all keeps the eye moving and entertained. But mainly, these paintings are overflowing with generosity and exuberance in an art world that in contrast often feels stilted, strategic and mercenary. I didn’t want to leave the gallery; I wanted to spend the rest of the day with these people. 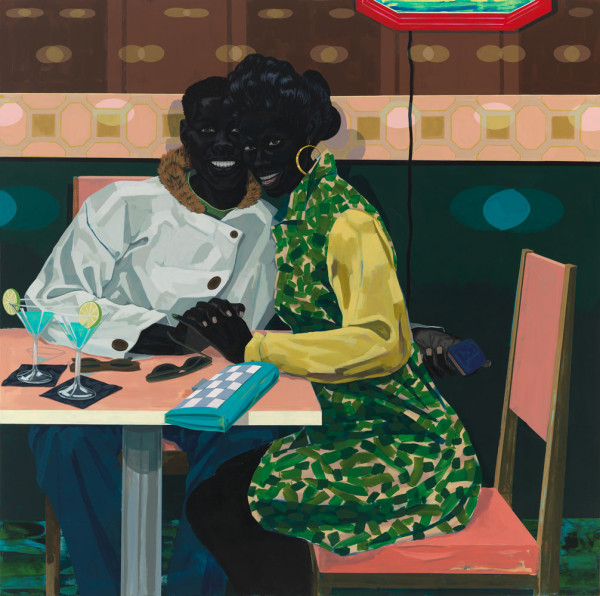 Christea is a top producer of print editions, and this new one from the oft-wonderful Hodgkin is somewhat slight but charming—much of the imagery is of a sort of repeat botanical meditation. The greatness, though, is that they’ve included one huge, 20-foot-long hand-painted version of an etching in the show, and it’s a doozy. The epitome of Hodgkin; it occupies a whole wall and vibrates. 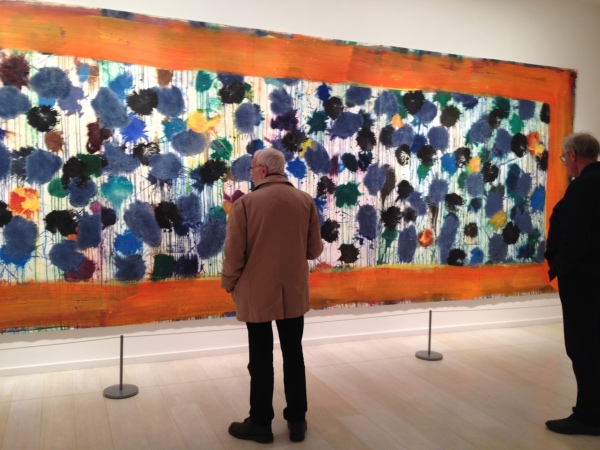 The show is fine, and clever, of course, and I thought, “Yes, this is what I expect from Tom Friedman,” and then I came upon this incredibly seductive mobile called “Swarm,” that, if I could have walked out with it, I would have. Dozens of teeny-tiny little random bits of detritus are strung up almost invisibly to form a shaped cloud of colorful, suspended confetti; it’s a super-cute, three-dimensional garbage air collage. Loved that. Love how his career is based on play. 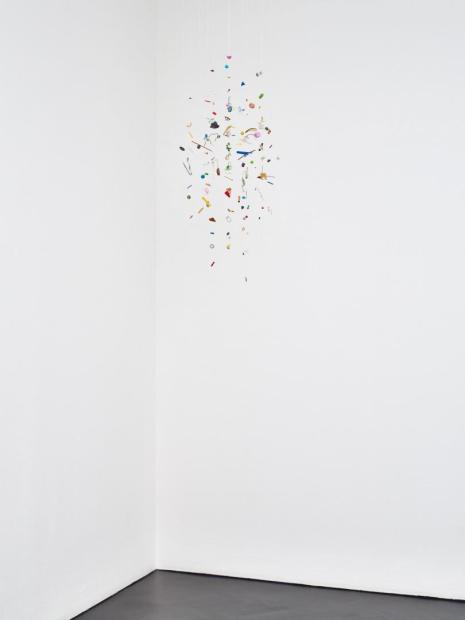 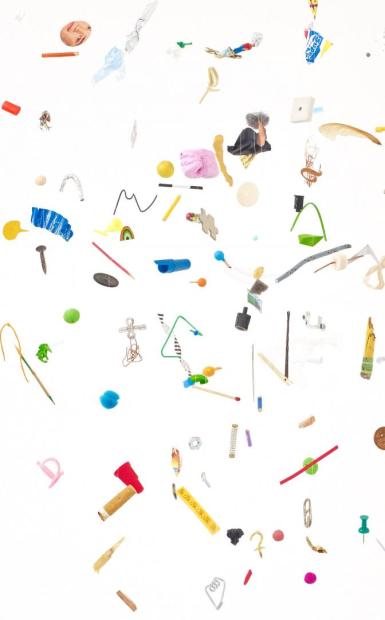 The show is called My Animals and Other Family, and I like Alice Neel generally and love real-deal paintings starring animals, and intimate portraits of people, so there it is. These have an informal, matter-of-fact quietness to them that for me recalls the pleasant drop in my blood pressure when my dog hops into my lap. There is nothing highfalutin’ going on here. In fact, my favorite image in the show was a small, quick ink sketch on faded paper of two cats curled into one another. 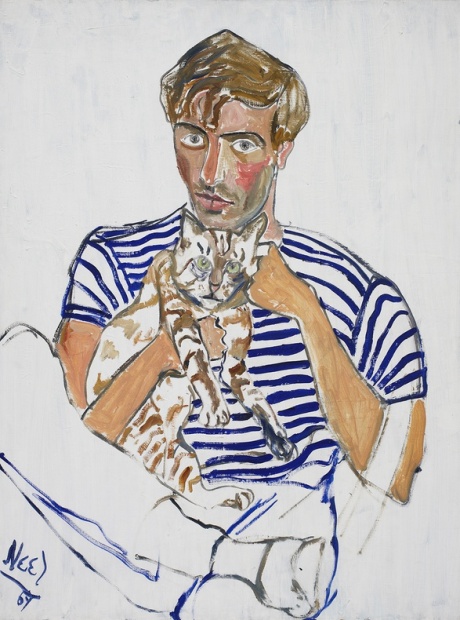 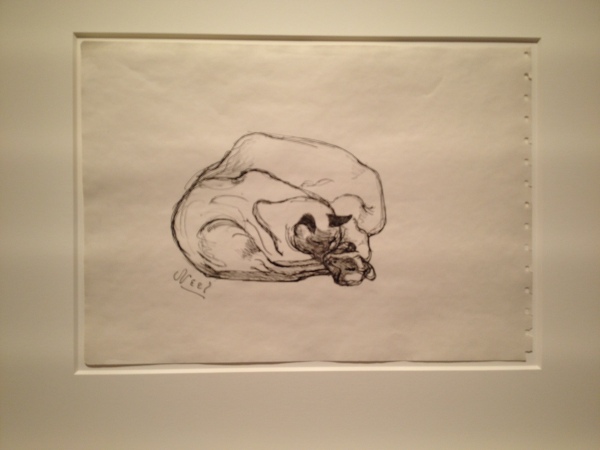 I usually like her work quite a lot, but this show felt like an artist who felt pressured to convincingly fill up a large space and instead of going cerebral or witty or ebullient, she went conservative and decorative. Disappointing. Her humor was MIA and her obsessive, dense patterning was reduced to something overly airy and insubstantial because all the gallery’s cavernous oxygen overwhelmed it, despite the giant squares of draped fabric, which are meant to reference Rome and time she spent there recently. They sort of reminded me of leftovers from the HBO series. The suspended glazed ceramic baubles were cute, but only cute. 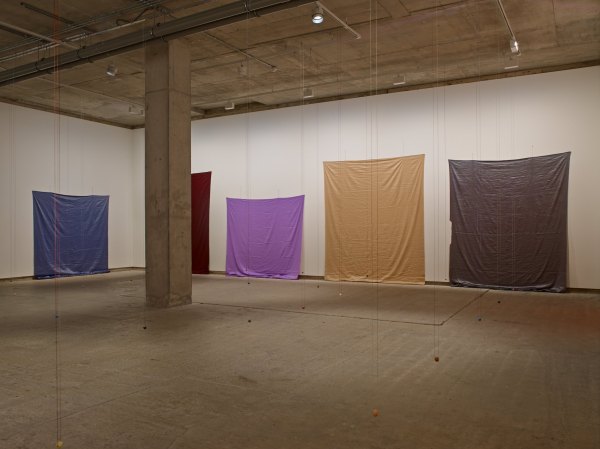 The first time I’ve seen Barney’s props without having seen the support film. These sculptures reportedly do reference or appear in his latest, “River of Fundament” (2014), which is, by all accounts, a six-hour meditation on the difficulty of crossing a big river of poop, but the video doesn’t accompany this show. The biggest piece, in the middle of the gallery, has a good balance of something new-feeling while still referencing vintage Barney. It’s both concrete and abstracted biomorphic car chunk—the big American kind of the faded glory of Detroit industry—with its chassis and hoses and cylinders that stick out like ribs (I get some H.R. Giger out of this), cast in heavy metal, and it reminded me most of the demolition derby scene that unfolds pretty spectacularly in the lobby of the Chrysler Building of his “Cremaster 3” (2002). 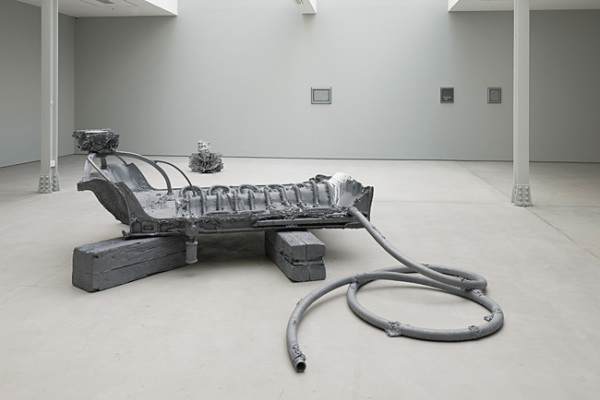 But if I didn’t know that, I don’t know if I could recommend this show to anyone; some of the work has a satisfying presence and beautiful hand, but the works are somewhat alienated (from each other and the source) and random here. Nice vitrines. Perhaps I shouldn’t judge fully until I’ve seen “River of Fundament”, but the gallery did vote to show these things without it, and I don’t think I can do a six-hour, Barney poop movie this year. Or next. I’m tired just typing this.

I respect Richter as much as the next art lover, but this show is depressing as hell. It’s the first show at Goodman’s London temple to the market, and this supposed marquee show feels like one of the following: 1) Richter is getting old and disconnected and letting assistants make the work and decisions, or 2) he’s tired and bored and phoned it in, or 3) he’s actually taking the piss out of the art world, its market, and his dealer in her much-anticipated new space. The place is so new, in fact, that you could still smell the plaster drying, but this big show lacked all cohesion and had all the personality of a cement doorstop. In fact, it was hard to look at. It was aggressively boring and ugly. What the heck happened? I bet it sold anyway. 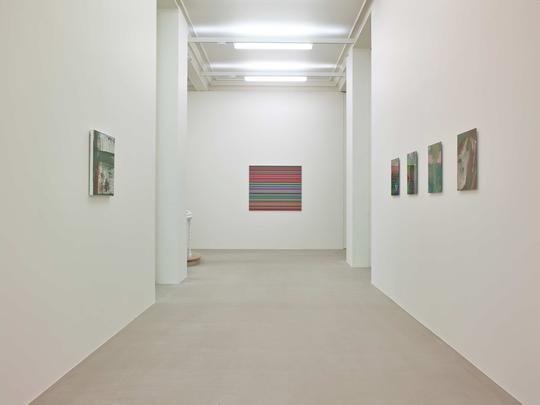 The show is called I ♥️1984, and Monk was born in 1969. The show itself unfolds much like a mini survey, (it’s not, really) in a range of materials, but the connecting theme is one of mortality. This guy is 45 and totally feeling his age; it seems to have become something of a rude awakening and obsession, and I’m right there with him. 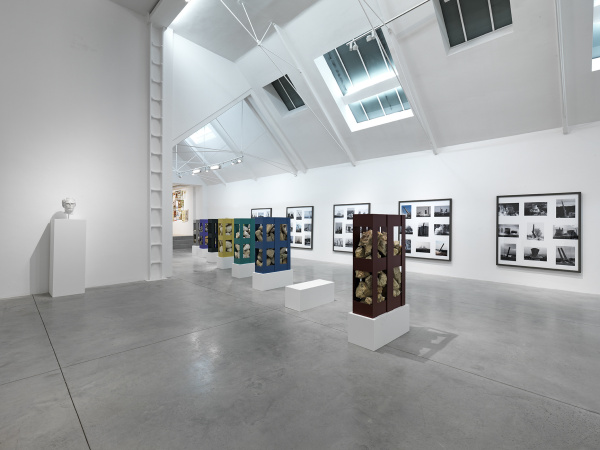 The most melancholy and memorable piece is a grid of traditional linen tea towels, each printed with a full calendar year, which covers a wall by the reception desk. They start with 1969 and run up to 2014. For those not familiar with this very common UK domestic object, here’s a pic of a typical-looking one: 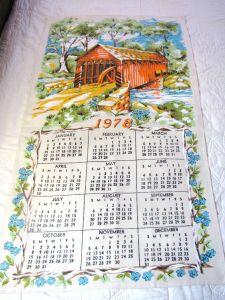 They’re sentimental, kitschy things, all with different patterns (like commemorative stamps or plates) but in this case they make up an overwhelming illustration of every day the artist has lived since birth. There’s no picture of the piece on the Lisson site so here’s an installation shot (which features my husband Richard and my friend Joanna, a Lisson director, in the background). If you’re middle-aged or about to be, this piece hits you in the gut. 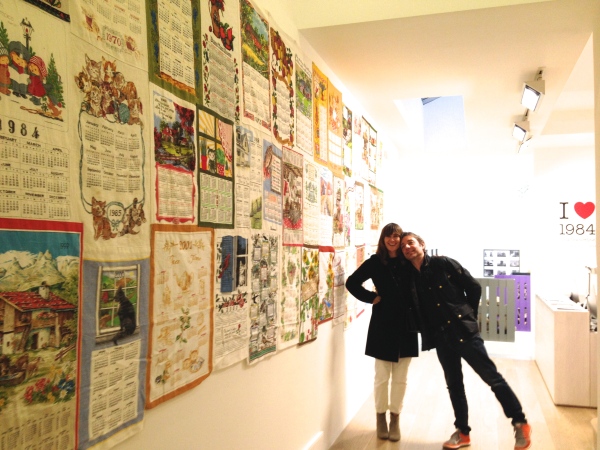