by Katie Geha May 23, 2013
FacebookTwitterEmail

Leah Meltzer is a young and ambitious performance artist who recently moved to Austin from New Orleans. She attended the Parsons School of Design and Eugene Lang College in New York where she studied photography and performance art. She is currently one of the performers re-creating Joan Jonas’ Mirror Check on Saturdays throughout the months of May and June at the Contemporary Arts Museum Houston.

I met Meltzer at a party where she told me she had sat several times with Marina Abramović during The Artist is Present at the Museum of Modern Art in New York. Always fascinated by the culture that surrounded this exhibition, I wanted to know more about Meltzer’s experience. I met with her at my apartment and over wine we discussed performing meditation, nudity as risk-taking, and the importance of re-performing canonical works. 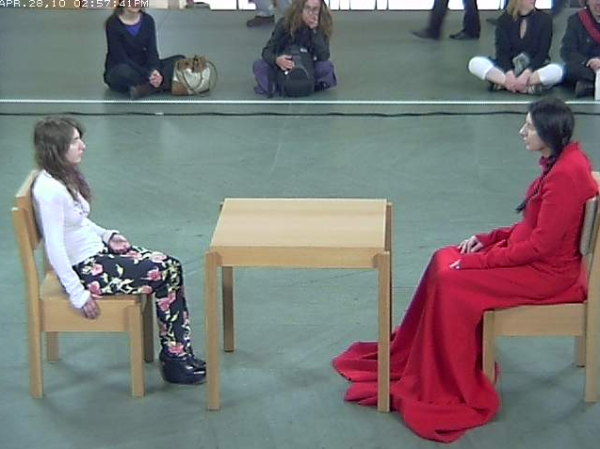 Katie Geha: How did you get interested in performance art?

Leah Meltzer: I went to a show at MoMA PS1 called Into Me / Out of Me and I had never seen anything like it before. The premise was related to going through and out of the body. So it was Robert Mapplethorpe’s fisting and Paul McCarthy in a bathtub looking like he was eating his shit. It was just really intense—I was simultaneously revolted, intrigued, and turned on.  That opened the door to wanting to do strange things. I also took a class that was based on going to Judson Church and viewing work and the second time I was there I thought to myself, “I’m going to perform here.”

KG: What drew you to visiting the Artist is Present?

LM: Actually one of the pieces in the P.S. 1 show was Marina’s Art Must be Beautiful when she’s brushing her hair and saying “art must be beautiful” over and over again. So I had been a fan for a while and when I heard it was happening at MoMA, I knew I’d be spending time there.

KG: When did you first go?

LM: Within the first month, I went at around 3pm and I sat with her for a couple of hours.

KG: What were you thinking about when you were sitting there, or did you think at all?

LM: The first time I was like, “My back hurts, I want to go pee!” Ultimately, I kept thinking, “What am I doing here?”

KG: Abramović calls it an “energy dialogue.” Did you feel like you were having some kind of conversation with her? 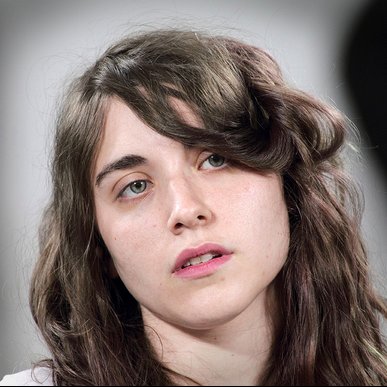 Leah Metzler in Flickr documentation of “The Artist is Present,” Day 43, Portrait 15

KG: Was there a lot of waiting?

LM: A lot! Sometimes six hours. It’s funny, though, it wasn’t that bad until Jerry Saltz wrote about the piece. Before that write-up, you didn’t have to get there before the museum opened. After, you had to get there maybe thirty minutes to an hour before the museum even opened if you wanted to sit. Also, near the end of the show, the museum would let VIPs in early, so when you got there, there could already be nine people in line. You know, the James Francos and Matthew Barneys.

KG: How often did you go?

LM: I sat and had my photo taken five or six times but I went triple that. Sometimes I would maybe just go and watch and then sometimes I didn’t get to sit. I spent so many hours there. Just waiting, watching.

KG: What compelled you to return so many times?

LM: So much of it had to do with creating a connection to the museum and creating kind of a community space. I guess I feel most comfortable in a museum and it felt like a space that I’m supposed to be in. With my Parsons ID, I could get in the museum for free. I would go to the theater once every two weeks or sometimes I would just go and take a nap there.

KG: Did you have an intention when you sat with her or did you just go sit and see what would happen?

LM: I think I wanted to have an intention. I remember thinking, “Oh I should cry,” but I couldn’t and then that just seemed silly. I would get tired sitting there and my eyes would get fuzzy and she would seem to melt and I’d feel like I was lying on my side. And then I’d get up. 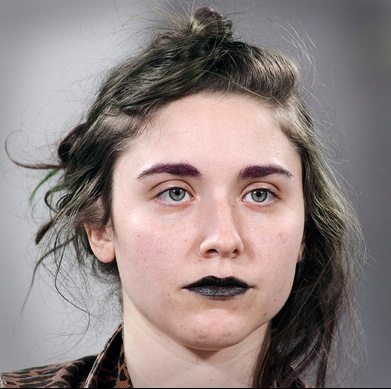 Leah Metzler in Flickr documentation of “The Artist is Present,” Day 39, Portrait 12

KG: Did you feel like you needed to sit for a long time?

LM: Maybe. Well, I think the longest that I sat was two hours because at a certain time I just felt like I was done. I would go into a meditative space and felt calm and in deep concentration of being alive and then once I reached that and it passed, that was it.

KG: That sounds pretty profound. She taught you how to meditate?

LM: She definitely opened me up to it.

KG: How was waiting to sit with her and actually sitting across from her different? Or do both actions inform one another?

LM: They coincided and informed one another. I developed relationships with the people who were sitting. One infamous sitter, Paco, asked several of the sitters to write a paragraph about the experience. He put the writing into a book and gave it to Marina. That was special to be involved in.

KG: You’re currently performing some of Joan Jonas’ work for the Parallel Practices exhibition at the Contemporary Museum in Houston?

LM: Yes, they’re doing a reconstruction of Mirror Check.  Joan Jonas did the performance in the 1970s—she’s nude and she holds a hand mirror; she does this circular motion around her body in order to see all its facets in the mirror. 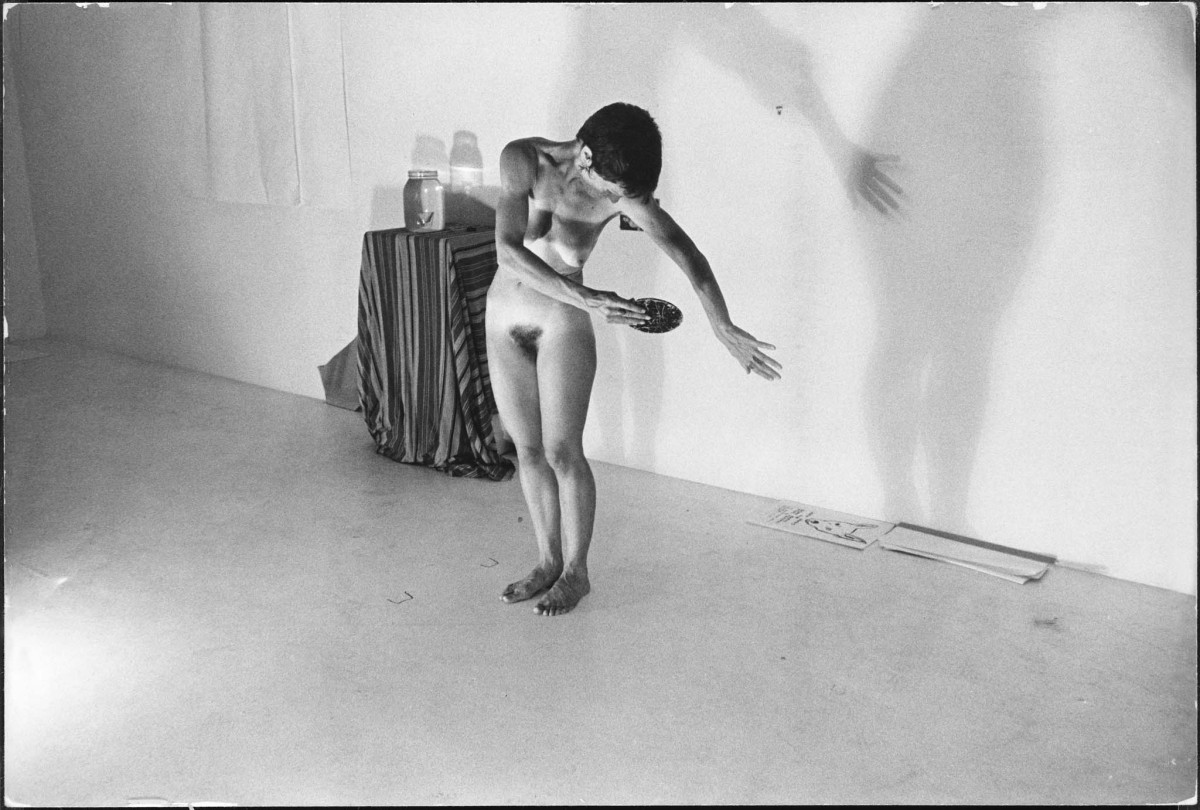 KG: How did you end up getting involved in this re-performance?

LM: Well, I met the curator of the exhibition, Dean Daderko, at Clifford Owens’ performance at the CAMH. He approached me and asked if I might be interested in re-performing the Jonas piece and, yeah, of course I was. It’s happening every Saturday this month and will continue into June.

KG: And so you’re nude in the CAMH?

KG: So were you nervous about it?

LM: Yeah, hell yeah. Definitely. Well, in one of the first pieces I did was at the international curatorial center in Brooklyn, I cut a hole in my t-shirt where my tits would be and sang some pop song while signing the lyrics in sign language. “You Broke my Heart.” In another performance at Judson Church, I had two girls wearing only sheer tights. They were sitting intertwined and, weirdly enough, I was thinking about Joan Jonas’ Mirror Piece 1 photograph where her legs are in the glass and there’s another mirror. 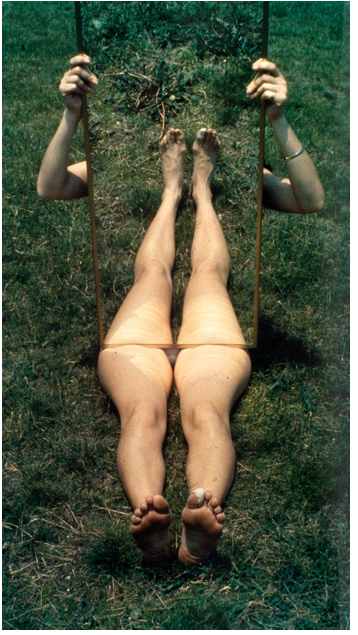 KG: Was it necessary for your performers to be nude? Or for you to be nude during a performance?

LM: I mean, well, they weren’t nude entirely. But it was definitely about fleshiness and skin and bodies, so I thought it was necessary. For me, I feel like nudity allows for catharsis or it encourages me, as a performer, to be more vulnerable. It creates a situation that feels more human. I kind of think, maybe, that if you do performance art at some point you have to put your nudity in it because it’s just part of the game.

KG: And so how does it feel to be re-performing another artist’s piece?

LM: Doing the Joan Jonas piece makes me feel more confident as a performer and like I’m building my repertoire. It’s an absolute dream to be involved in a project at a major contemporary museum and with an artist I have read about in school and admired. I couldn’t be more grateful. Even if it is just that I am standing naked in a room, it’s symbolic of a greater history.