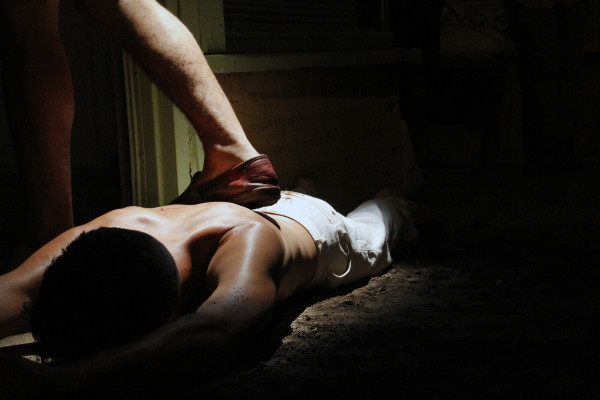 Jonatan Lopez, “Doormat Syndrome.” This work just made me sad. I wanted to pick him up off the ground, before anyone else stepped on him.

Recently, on the arts blog for D Magazine, editor Peter Simek asked the question, “Is there too much performance art in DFW?”

He goes on: “For my own part, I find much performance art tedious, frustratingly effusive and emotional, and overly obscure. It too often feels like a kind of artistic therapy, which is enacting all sorts of wonders on the spiritual well-being of the artist, while leaving the audience sipping Modelo and left with little but an attempt to feel good about witnessing someone else’s expressive moment of public psychic rehabilitation.”

I would like to disagree with Simek. But some of the work I saw at the “(Wo)manorial Inside/Outside Performance Showcase” last weekend in Dallas did seem to resemble a form of public psychotherapy. The event was staged in four Oak Cliff venues: Oil + Cotton, The Ant Colony, spotplus, and the Texas Theater’s Safe Room, and while I am a huge fan of performance art and support the initiatives of Performance SW (and ongoing curatorial project by Courtney Brown and Alison Starr), there were some issues here. 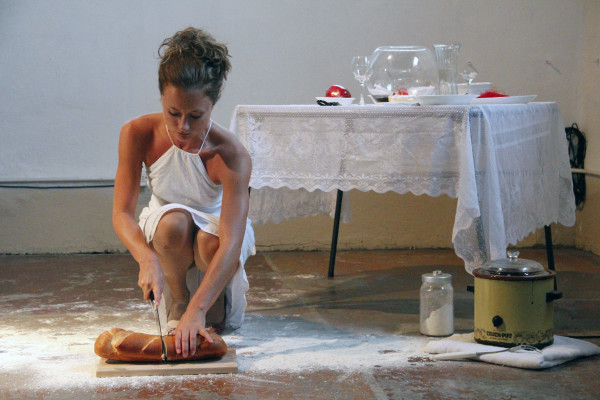 Mainly this: One of performance art’s greatest challenges in today’s ADD culture is the time factor, and we know performance art requires a major time commitment (sometimes hours) on the part of the viewer. But even I left before it was over. My endurance was extinguished three hours into the event and I didn’t see the last few performers.

(Maybe I was spoiled by my time living in New York in the ’80s; P.S. 122 was my home away from home. I saw Karen Findley, Holly Hughes, Tim Miller, Penny Arcade and many others perform live, and have watched Carolee Schneeman’s “Meat Joy” multiple times.)

I’ll point out that many of the artists I saw this weekend seemed to be either students or recent graduates who are just developing their ideas and artistic practice, and performance art requires a major dose of risk and vulnerability. But art students and grads should know that real audiences are not captive test subjects; they are busy people who expect to see resolved works. All artists should keep in mind that if their audience is going to commit their time, then it better feel worthwhile. 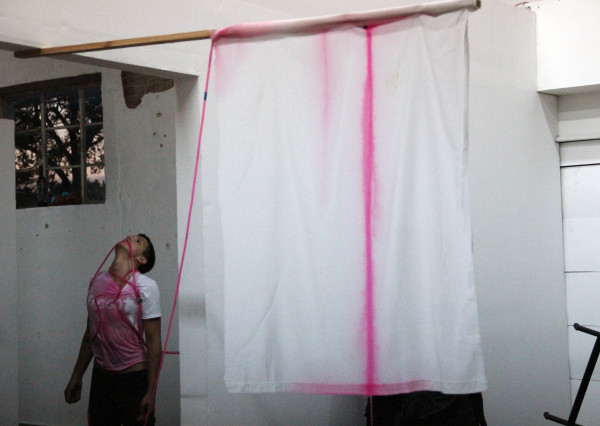 Ryan Hawk, Untitled.  Hawk’s performance was courageous. I had a lovely conversation with a little girl who asked me if his blood was really pink. We both agreed that it would be cool to bleed pink.

There were some bright spots; the evening highlight for me was Michael Anthony Garcia’s performance, “If At First.” The artist’s persona was a pimped out, business-suited beekeeper with dollar bills lining his netting. His interactive performance included asking participants to text him first impressions of others in the audience. He then made labels and stuck them on the participants. Since everyone is constantly texting anyway, I think it’s clever to conceive a work that incorporates this tech-driven behavior. The work asks us to confront our own stereotypes about people, serves as an easy conversation starter, and ultimately gets our noses out of our cell phones to initiate those conversations. 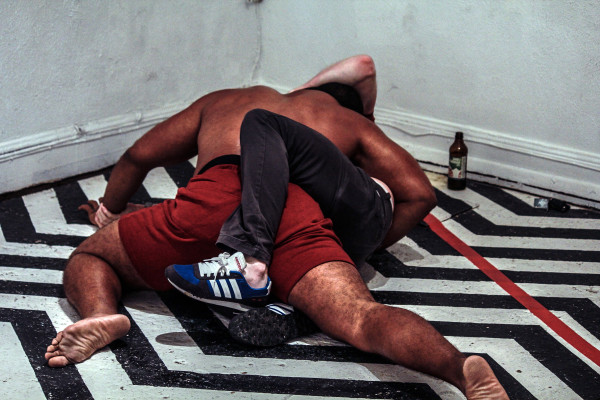 Rueben Melendez, “VS.” I was bummed to miss this performance. I love wrestling and heard from multiple sources that it was super intense in the best possible way.

Simek closed his post with: “I know I’m being cynical. I know there’s there’s good performance art.” There is. I have had the pleasure of writing about great local performance art just this past year, such as Tony Orrico at the MAC and Captain Kiser/Thumbwrestling at the DMA. And last weekend notwithstanding, I’m certain there will be more. But he’s right that Dallas could be more discriminating about what it will stand still and watch, no questions asked.

When I first read the headline, I thought it said “Public Psychopathy in Oak Cliff”