“Carriers: The Body as a Site of Danger and Desire” at the Blaffer 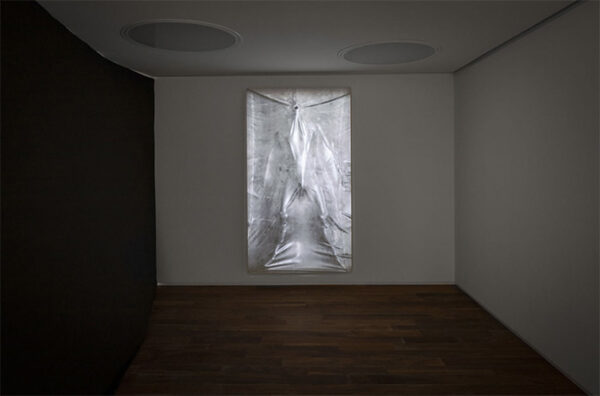 The mechanical sound you hear as you enter the Blaffer Art Museum on the University of Houston campus is created by the vacuum suction of a male figure being pressed against a flat surface. His body contours are revealed as air is removed from around him and a plastic material wrinkles and stiffen around his skin. Think Han Solo in carbonite, but with his dick kinda showing. It is Ryan Hawk’s Untitled (vacuum) video from 2016, a work precisely projection-mapped onto a relief surface hanging on the wall in the Blaffer’s current (and soon-to-close: March 14) group exhibition.

It’s one of a couple of videos by Hawk in this show, titled Carriers: The Body as a Site of Danger and Desire. Hawk’s work borders on and relishes in the gore that can be a part of living out our lives in human meat-suits. In his pair of vertical video works, Ulterior Subjects, for example, the sexually suggestive is embedded in the grotesque, as pulsing buttholes and slurpy mouths in fleshy material “push” against the screen surface and stare back with faceless, darting eyes. 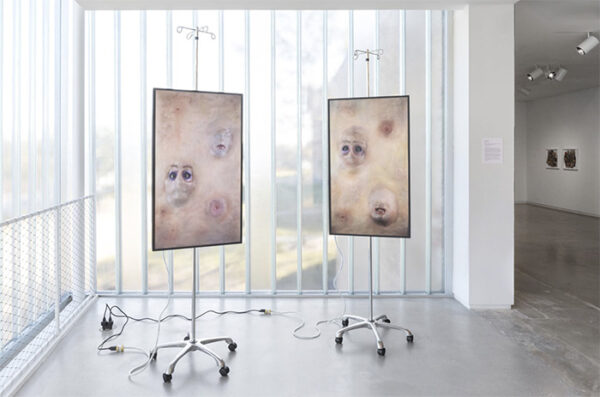 In another room, a second-floor gallery, are ten works that combine collage, video and sculpture that speak to the body politic. Everybody Loves the Sunshine and Man vs Man are two works by Robert L. Hodge, the Houston-based artist whose use of language is a visual build-up and laceration of textures that layer and flay the deceitful histories embedded in maps, books, and symbols. Hodge reveals his own codex of meaning and stories, usually woven into the lyrics of hip-hop, which Hodge mines and dispenses in ways characteristic of what Public Enemy’s Chuck D describes as “The Ghetto CNN.”

On the same floor, Violette Bule’s Dream America, from 2015, offers an indictment of the faustian bargain that is the American dream — the shiny city upon a hill — has a beacon light that’s buffed to its carnival mirror finish by the very hands it slaps away and polices. If hard work and pulled bootstraps were the formula, Mr. Reagan, freedom-loving people everywhere wouldn’t need that guiding light. 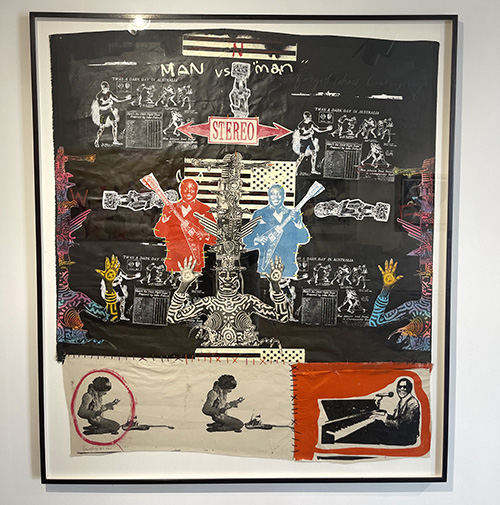 Bule’s American flag is contrasted by a pile of red, white, and blue dirty dishes carried on the shoulders of the subject in her pair of photographs that make up Dream. Homage to Johnny, shown together with the images of Bule’s installation, delves further into the dichotomy at the core of migration and commerce. The silverware, more than thirty pieces of silver, is a symbol of betrayal — the body for the money, the soul for a slice of the pie. 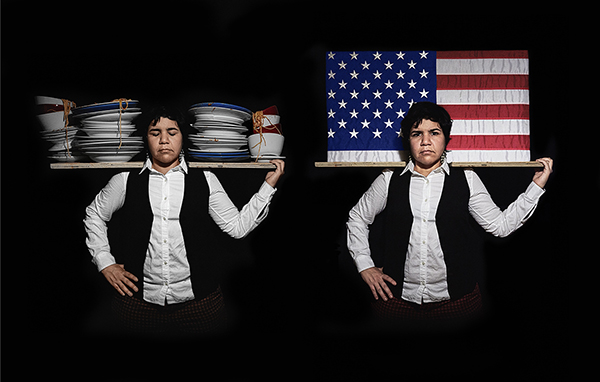 The intersections of sensual, societal, and sinful in Carriers — whether it is a call to purification and sanctity in Dario Robleto’s Lion or Lamb collages that call out the fundamentalist Christian fetish of assigning sin and impurity to Black bodies, or Lovie Olivia’s Totems that reflect on the how queer women of color navigate this world — are pronounced.

Michael Ray Charles’ new print series Every World is a Head, Every Head is a World questions the idea of beauty as it relates to the idea of Blackness. The faces of Black children, adorned in picturesque bouquets, blend the beauty of innocence with the violence of racial caricature and otherness, forcing the confrontation of how the world relates to Black bodies and where that dehumanizing treatment leads. 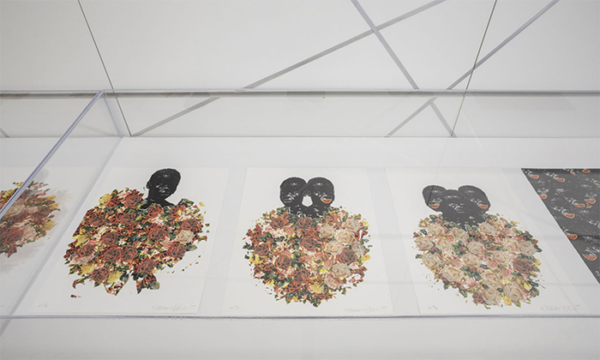 “Every World is a Head, Every Head is a World,” Michael Ray Charles

What we have learned over the past year is that where the body intersects with politics, race, love, and contagion, we win some, and we lose some. Hard lessons about isolation are being learned, while history seems to be repeating itself as we re-live lessons we should have learned 50 years ago.

These times of isolation — or at the very least, this weird and dangerous year-long disruption — has forced upon us a new awareness of space and of bodies. Our own, our loved ones, and even strangers. Going out into public spaces is now a navigation of familiar-yet-augmented spaces with masks, sheepish acknowledgements of other bodies in space, or straight-up avoidance. Even if we snap back to our pre-Covid mania of detachment, distraction, or voluntary house-cattery, we will still be marked by these dark days. What a show like Carriers does is help us make peace with the blessings, curses, and realities of our meat suits.

Carriers: The Body as a Site of Danger and Desire closes on Sunday, March 14. For more information, please visit the Blaffer Art Museum’s website here.

I really loved this show. But, um, why is there a “dick joke” included in this review? Ie., “Think Han Solo in carbonite, but with his dick kinda showing.” I’m not a cultural expert on dick jokes, but aren’t dick jokes usually indicative of bullying or body shaming? I just thought this comment was odd in context to an exhibition named “Body as a Site for Danger and Desire.” Sorry for negative comment because I know y’all mean well and wish to support local Texas artists with coverage, but I think making dick jokes in context to a museum show about human trauma is offensive.