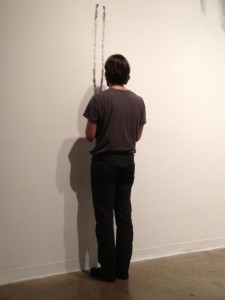 On the eve before the 12-year anniversary of 9/11, an unassuming man dressed in grey faces the New Works Space gallery wall, his back to the audience. With a black conté crayon in hand, flush with the wall, he gracefully falls to the concrete floor, allowing the trajectory of his body to generate an arced line on the stark white wall. He performs this motion repetitively for 45 minutes until the wall is covered with organic, fluid lines. This delicate, gesture drawing belies the pain and loss of control the man’s body both embraces and endures. Although it is not the artist’s intention, I cannot help but think of this act as an elegiac performance; one falling man paying homage to THE falling man of 9/11 and all that the iconic photograph symbolizes for our nation.

About halfway into the performance, the audience becomes visibly uncomfortable; a few people walk out. Sweat-stained and smudged, the artist’s movements visibly slow as his body fatigues, showing evidence of pain. The slump and fall start to resemble a person who has been the victim of a violent shooting or knifing. And then it is over.

The performance is part of a week-long residency and exhibition of Chicago artist Tony Orrico at Dallas’ McKinney Avenue Contemporary (MAC). Orrico, who has performed with Trisha Brown Dance Company and performance pioneer Marina Abramovic, transforms the gallery’s walls in four days (30+ hours) with his unique combination of movement and mark making.

I return on Friday to witness more of Orrico’s performances. Three of the gallery walls are covered with his drawings. Arriving during mid-performance, I watch Orrico standing on a paint-splattered ladder, repetitively drawing with large sweeping arm motions. The sound of the conté crayon marking the wall is both soothing and grating. I sit on the concrete floor thinking that, as the viewer, I too should experience some discomfort. 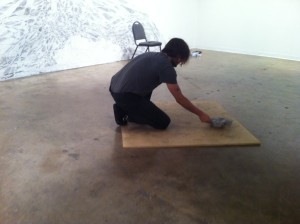 After an hour, Orrico pauses and I give him my offerings. In addition to the drawing performances, the artist performs and interacts with various objects that viewers have donated. The premise behind this project, entitled Exhaustive Objects, is to use the body to fully engage and explore the possibilities of an object. I brought the artist a photograph of 9/11’s falling man printed from Google, as well as two resined animal bones.

For his next action, Orrico chooses my bone as his subject. To say I feel honored would be an understatement. During the 45-minute performance, he balances on the bone, put the bone in his pants, in his shirt, up his nose, in his mouth, under his arm and many more iterations before the bone’s destruction. Since I covered the bone in multiple coats of resin, Orrico has to jump and stomp on the bone before it will break. I confess to feeling a sense of perverse pleasure in witnessing how hard he has to work to destroy the bone.

Suffice it to say he is very creative in his explorations. There is an element of play and improvisational discovery that I rarely encounter in contemporary art practice. It takes a certain amount of guts to play with a bone for close to an hour while expecting your audience to understand your intentions and have staying power. 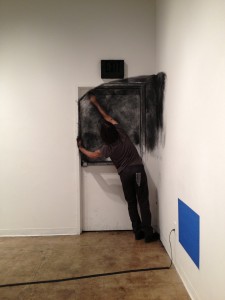 For Orrico’s last performance, which happens to coincide with the opening of the galleries’ exhibitions, he chooses another object as his subject. I have the luxury of sitting on the floor in close proximity to Orrico. I’m not sure that this is the best presentation for a large group of uninformed patrons walking in and out of the space. More than one person must have wondered what in the heck this guy was doing with a bunch of leaves and how is this possibly art. The object performances work best in an intimate environment where the viewer feels a personal connection to the artist.

Orrico’s practice is rooted in tenets of performance art including using the body as a tool, engaging in physically demanding actions which push the body to limits of endurance and challenging the viewer to engage in non-traditional viewing practices. While I see his influence from Brown and Abramovic, Orrico has solidified his own style. His practice is one of exploration and wonder. He challenges all of us to engage with the world as a kinesthetic learner, using all of our senses to approach life with the curiosity of a child and the intellect of an adult.

Nice review! Tony Orrico’s exhibition at The MAC is another great example of how performance art is helping to bridge the gap between high art and real engagement with the public — through actions that can be performed in all sorts of environments. Here, at The MAC in Dallas, Orrico, produced several extremely intricate and exhaustive artworks, while allowing members of the public to come and go as they pleased. The performance continued for nearly a week, and, this weekend, will culminate with a two-day workshop. For the workshop, the public was invited to to engage with the artist in a variety of exercises that may shed a light into what it’s like to be an artist — or, for artists, how to expand boundaries.

The MAC PAC, a volunteer organization, affiliated with The McKinney Avenue Contemporary, selected this program last Winter, out of a huge number of proposals brought forward by a committee made up of MAC PAC volunteers. After months of discussion and planning. As part of the group involved in the planning, I’m proud to see this show come to fruition — and I’m excited, yet a little nervous about what will transpire in the workshop this weekend, which I’ll be attending.

I invite anyone who hasn’t seen the performance to attend Tony Orrico’s art talk, taking place at 5:30pm this Saturday at The MAC, and to take some time to view the works in the New Works Space — it’s astonishing to imagine each stroke was made one-by-one (or in cases, two-at-a-time, as the artist works with both hands) — and within the physical limitations of his own body. It’s just way too cool…

Jordan,
Thank for your post and comments. I too look forward to attending the workshop and lecture tomorrow.

Jordan,
Thanks for your post and comments. I too look forward to attending the workshop and lecture tomorrow.