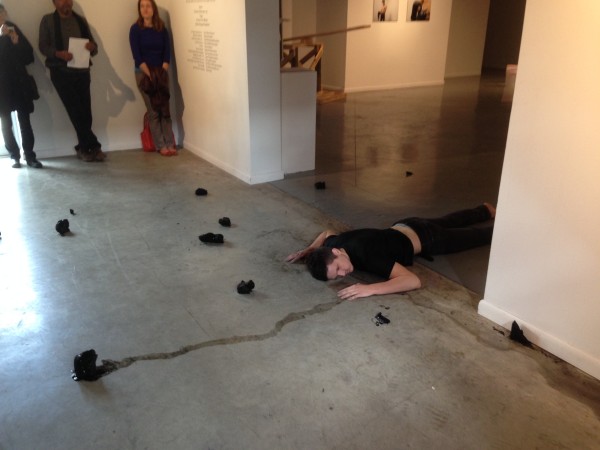 I was five minutes late. When I arrived on the scene, Hawk was lying, facedown, on the concrete floor in a pool of clear fluid. A circle of people stood silently, as water trickled from a bucket overhead onto Hawk’s prone form. Drip. Drip. Drip.

A slim, youngish man with dark hair and a stubbly beard, Hawk was dressed in dark jeans and a black t-shirt, as if he had passed out on the sidewalk in front of a club, or fallen off his skateboard. Barefoot, he was Everyman, from Brooklyn.

Time passed. He seemed to be breathing. Despite juicy chunks of a dark, clotted goop scattered around his body, he didn’t seem to be bleeding. I decided not to call the paramedics.

Maybe people who attend more in-gallery performances than I do recognize this as a conventional type of presentation: the audience forms a circle around the performer, and whatever happens inside, on the impromptu “stage,” follows theatrical norms of suspension of disbelief, non-interference with the performers by the audience, etc.

Certainly no one interfered. For most of an hour, as we stood watching Hawk getting dripped on, no one spoke, and few moved, except to leave. One Art League staffer, on his way to the org’s offices at the back of the gallery, stepped across Hawk’s magic circle apologetically, like someone squeezing past your knees on their way to the restroom.

It was a lot about waiting. Not being conventional theater, there’s the familiar anxiety about one’s role: should I see if he’s OK? Can I go finger those icky lumps? Should I get some paper towels? Or do I just wait and watch? This kind of social discomfort is almost the defining effect of most art performances; it often is used as a stand-in for other modern anxieties, but it’s easy to evoke, and is always the same. Hawk’s performance failed to rise above the cliché.

After a few minutes, it was clear that he was lying there, and we were watching, and it was likely to stay that way, leaving attention free to wander away from Hawk’s body to the other audience members (yawning and texting), the goop (still don’t know what it was—Jell-O? Axle grease? Tar sand?), the exhibition literature, and Instagram.

Instant messaging has transformed the experience of events like this—without audible sound or visible disruption, I could view Hawk’s body from a half-dozen angles via the Instagram feeds of others in the room. I could check back to see what had happened before I got there, and read texted comments like, “I feel like I just got suckered.” Audience empowerment.

After twenty minutes or so, he twitched, flexing his fingers weakly. Thereafter, he would periodically vibrate his arms, shoulders, back and buttocks, as if shivering. He didn’t overdo it; although not completely convincing, it created an impression of vulnerability that, aside from tedium, seemed to be the whole content of the piece.

Eventually, when the water in the bucket ran out, he got up. Standing slowly in his sopping clothes, he turned and walked offstage into the Art League’s offices.

Ryan Hawk performed at Art League Houston on Saturday, February 8, 2014, in conjunction with his one-week exhibition, curated by Max Fields. On view through February 14.

Before you denigrate his performance you should read his artist statement at least:

“Referencing previous systems of art making, I place them within current technologies in order to interrogate art historical narratives. Employing formal and aesthetic strategies, I often create spaces of illusion. These spaces, whether physical, psychological, or theoretical, can be constantly created and redefined. Time, simultaneously, serves as a platform for transformation to enforce said illusions while offering glimpses into their deconstruction.

Self awareness on my part of my role ‘as the artist’, hyper awareness placed onto my viewers, and exposing technology’s effects on an inter-subjectivity all play a role in deconstructing previous narratives, leaving them exposed for a closer examination; through an employment of these strategies is where the scope of my work lays. The desired outcomes are not based in real life scenarios, as I acknowledge a separation between art and life. Therefore, the spaces that I am so infatuated in creating are of contemplation; spaces where life is imitated and where meaningful questions about our knowledge of the world are asked.”

As I said, I got there late. I must have missed that part.

I wasn’t there for the performance, but I can confidently say that if I had been and if I had read that statement beforehand, it would have made the whole thing just a little more tedious. (That said, I liked the installations.)

Bill and Robert are too nice. If I had been there, I would’ve been tempted to heckle. (I would never heckle, actually, but I would’ve stood there fantasizing about heckling.)

Hawk’s particular brand of performance is the kind that would be parodied in an SNL sketch. (And has been.)

This review did not “denigrate”. It was critical analysis of a very well used scenario when it comes to performance that the reviewer believed did not rise above cliche’ and push the boundaries of the art form into new territory. Although the artist statement seems heartfelt, it sure seems like a lot of ‘splaining has to be done in order for this artist to get his point across…AND it ends with …”where meaningful questions about our knowledge of the world are asked.” So, the reviewer dared to ask the questions. All good for any developing artist to hear so they can grow.

I want to unleash a tirade, but I won’t.

So, is it an artists job to “push the boundaries of an art form into new territory”? That sounds like a hefty responsibility. How about, make some fucking art because you’re and artist. Haha! I can’t really say that this “criticism” pushed the boundaries of art criticism and took it into new territory for art criticism. But hey, better luck next time… Maybe you will grow.

I would suggest that it is the artists responsibility to be well aware of other performance pieces by other artists in order to ask his or her self what the heck they are doing both from a creative standpoint as well as from the viewers POV. What questions do you want the viewer to ask themselves. I have seen too many performance pieces where the artist is involved is lying on the floor or sitting in a chair or weeping in a corner or jumping rope in a pitch black room. The performance supposedly poses interesting questions but often, too often it is the same commentary on society or personal issues or fill in your own blank and it is presented as a simulacrum of another performance somewhere else. If the viewer is neither moved by the work, other than feeling awkward, then the work is a fail. If the performance causes discussional discourse and it follows you out of the performance space door, gets in your car and is chauffeured home to sit in your living room and you wake to it’s thought provocation in the morning, then the work has merit. I didn’t witness this particular work personally so WTF do I know about this piece. But the same critique applies.

I’m gonna follow you to your car, go home with you and have breakfast

If I may interject, belatedly, to offer my experience and analysis of the piece…

Hawk’s performance was, from my perspective, a subtle and interesting commentary on our complicity with torture in contemporary society. Davenport misreads the performance by viewing the twitches and shivering that surfaced periodically in the last 30 minutes of the hour long performance (a duration regulated by the ‘clock’ of water dripping steadily from a bucket suspended above the door frame) as fictional. This merits a correction.

One aspect of performance that distinguishes it from theatre is its exploration of real, material effects over artifice (while not always the case, there is a strong current of this in performance history). Ryan Hawk was not acting shivering. He was really cold. Close watching of the circumstances of the performance would make that clear. I’m baffled by the charge that his subtle shivering was “unconvincing” – perhaps it was my own endurance performance of attentive spectatorship that permitted an empathy with the artist’s wet back (and whose face I did not see – I’m the woman with the orange bag in the photo above, pausing from my study of the artist to observe the indeed rather strange responses of the crowd). The water was hitting his back in a way that was so evidently painful and uncomfortable if you had the patience to watch the work unfold – possibly more painful than Hawk had planned, possibly an effect he was cultivating. The water didn’t hit the same spot repeatedly; it moved around as water does, it crossed his shoulders and then jumped down to form a stream along his hips, soaking not only his shirt, but the top of his pants as well.

We stood there watching, absorbing the action – some of us apparently imagining that we were not implicated in every aspect of the scenario. Davenport’s review highlights some failures of the audience rather than the failures of the performance. The passivity and expectation of spectacle on the part of some audience members was not a designed component of the performance (not that one should have intervened to rescue the artist, but isn’t it interesting that no one tried? and isn’t it interesting that people took photos of each other taking photos of his discomfort instead?). As an assessment of contemporary society (or Houston or Texas or the US as a whole) and our inability to act on behalf of those without power, this was an interesting, if brief, statement. When I met with the artist many days later, he said it was a performance about not acting, not doing anything; you’re right Ryan, but about us not acting, not about you not acting.

For a lovely review of a similar situation in 1975 (which is a period of performance and post-minimalist art that Ryan Hawk is evidently engaging with throughout his exhibition and more broadly in his practice – not unlike a number of other interesting young artists, such as Kate Gilmore), I refer you to Roger Ebert’s excellent prose: http://www.rogerebert.com/interviews/chris-burden-my-god-are-they-going-to-leave-me-here-to-die

I will be curious to see if and how Hawk conceptualizes the politics of his engagement with 70s art in the future. This is a question that this particular performance open for me, more so than the more formal experiments in the Art League exhibition. The issue of originality in this review and the commentary is misplaced; performance has always been about (can only ever be about) repetition of gestures, forms, etc. Only the situation itself (audience, artist, place, time) is new. I would urge anyone who insists on originality to consider why they need to see a repetition of originality to be sated by art and to contemplate why it is the obligation of the artist to entertain rather than the responsibility of the audience to act.