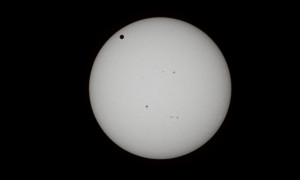 Images above and below: Simon Starling, Black Drop, 2012, single channel projection (35 mm film transferred to HD), duration 27:42, the Museum of Fine Arts, Houston, joint acquisition of the Museum of Fine Arts, Houston, funded by the Anchorage Foundation; and the Dallas Museum of Art, funded by the DMA/amfAR Benefit Auction Fund. Image courtesy of the artist and Casey Kaplan, NY. © Simon Starling and Casey Kaplan, NY.

The transit of Venus between the Sun and Earth is the rarest of predictable, observable astronomical phenomena, occurring in pairs eight years apart with more than a century gap between them. Beginning in 1639, observations of that planet’s tiny silhouette passing in front of the Sun have been key in our understanding of bigger-picture spatial relationships, allowing us to estimate the size of the Solar System and the distance between the Sun and the Earth.

On the occasion of the most recent Venus transit in 2012, British artist Simon Starling documented it and created Black Drop—a film that explores the history and significance of Venus transit observations, as well as the nature of perception, observation, and recorded image technology. After premiering at Oxford’s Radcliffe Observatory last year, Black Drop has made its Texas debut at the Pearl Fincher Museum of Fine Arts in Spring, Texas, alongside Starling’s related sculptural work, Transit Stone. The show opened in mid-June and is now in its final week.

Starling’s 28-minute film—an interesting, almost deceptive mixture of straight documentary and poetic meditation on its subject and itself—takes its name from the biggest puzzler of transit observations over the centuries—the distorted elongation of the planet’s silhouette as it intersects the very edge of the sun. This stretched “black drop effect” has presented challenges in drawing accurate conclusions from Venus transits. The importance of this little visual distortion makes this history as much about our vantage point and modes of perception as it is about the movements and scale of the Solar System.

It was important to Starling to document the 2012 transit on 35mm film. Since celluloid will be a long lost medium the next time Venus comes back around in 2117, this filmed observation is the last in a long history of analog photographic methods connected to transit observations, including one of the earliest cinematographic cameras developed by astronomer Jules Janssen for documenting the 1874 transit. Black Drop addresses this history while simultaneously becoming part of it.  There are recurring shots of a film editor working the tactile medium to shape the film that we’re seeing, making the piece at once a film about particular observations and an observation of film and observation itself.

The collaboration of art and science interests that led to the creation of the piece are fitting for its subject matter, as are the intersections of Texas arts institutions that led to the work’s first local exhibition at the suburban museum. Black Drop was jointly acquired last year by The Museum of Fine Arts, Houston and the Dallas Museum of Art—the first ever joint acquisition between the two Texas museums. This kind of collaboration is happening more frequently now with the collection of video works, as they’re more difficult to exhibit (requiring a certain amount of space and good conditions for projected light and sound) yet lend themselves to easier transit between venues than traditional paintings and sculptures. The reason that Black Drop’s Texas premiere is happening at a smaller museum rather than either of the larger institutions has to do with another collaborative relationship—that of the MFAH and Pearl Fincher Museum. 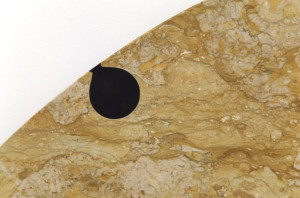 I spoke briefly with Alison de Lima Greene, MFAH Curator of Contemporary Art and Special Projects, who was involved in the acquisition of Starling’s works and this collaboration with the Pearl Fincher. She informed me that the two institutions have worked closely since the opening of the Spring museum in 2008, and that loaning works from the MFAH’s collection for exhibition has been opportunity for both reaching wider audiences and showing works that they don’t have immediate space or time to exhibit. Showing collected contemporary works like this are a challenge for the MFAH (at least before their expansion is complete, but likely long after.) In this way, the relationship between museums occasionally provides local viewers with windows into the MFAH’s more rarely seen collected works.

Greene also mentioned that, while perhaps not a key consideration, the MFAH does have Houston’s long history with space exploration in mind as it collects a works that could be interpreted as “celestial,” and that this was a part of their interest in acquiring Starling’s work. These peripheral, behind-the-scenes details shed light on the complex and increasingly collaborative concerns of art collecting and exhibition, and at the convergence of ideas and institutions that have brought Black Drop to Texas. 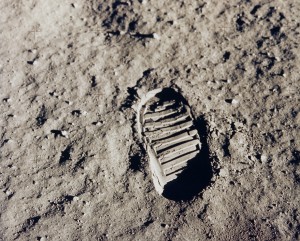 “Standing On The Moon” exhibition at the Pearl Fincher Museum of Fine Arts. Image source: NASA

Black Drop: Simon Starling is on view at the Pearl Fincher Museum of Fine Arts through next Saturday, August 2, with the 28-minute film on continuous loop. Also on view in the museum is another exhibition related to the roles of photography and film in cosmic exploration: Standing On The Moon, a show of photography from NASA’s Apollo missions to the moon, which began 45 years ago this summer.