The new exhibition, American Made: 250 Years of American Art at the Museum of Fine Arts, Houston opens next weekend. The show will feature an extremely wide variety of both fine art and decorative works from the museum’s collection, made between the 18th and 20th centuries. They’re boasting an assemblage that presents new perspectives on American art and identity. At the very least, this will be an interesting variety pack of the MFAH’s goodies. At best (fingers crossed), it will be a bold mixtape, forcing funky juxtapositions. It hasn’t opened yet, and so I haven’t seen it. But I thought I’d write something early in order to highlight one little aspect of particular interest to me, and to point out a good reason to visit American Made during it’s upcoming opening weekend, post-Independence Day: the great, early work of Robert Frank. 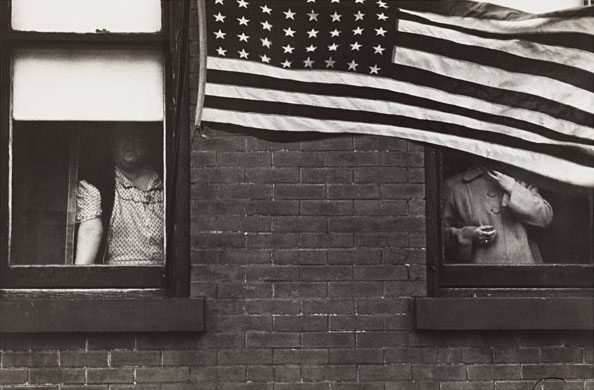 In 1954, the Swiss-born photographer applied for a Guggenheim fellowship, proposing to create a record of “what one naturalized American finds to see in the United States that signifies the kind of civilization born here and spreading elsewhere.” Put simpler in a letter to his parents, he wanted to document “how Americans live, have fun, eat, drive cars, work, etc.” With a recommendation from photographer Walker Evans, Frank got the grant, bought a used Ford, and in June of ‘55 he hit the road with his Leica and a bottle of whiskey in the glove box. Over the next year, he crossed and re-crossed the country, saying very little and shooting a whole lot of black and white images (around 27,000!) of people and things he saw at diners, rodeos, picnics, factories, office buildings, rallies, and funerals along the way. He captured empty highways and city crowds, politicians and drag queens, socialites and assembly line workers. And he paid particular attention to separate and unequal black America. 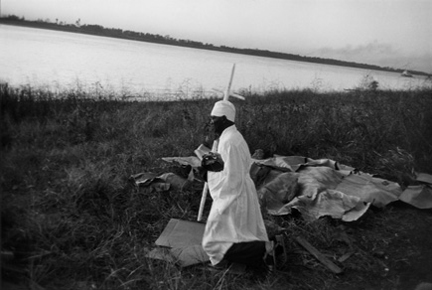 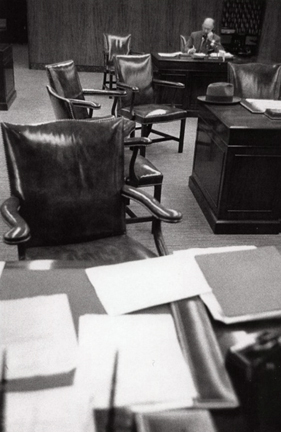 Through a painstaking editing process, he narrowed these photographs down to the 83 that comprise his groundbreaking book, The Americans. This unusual portrait of the country by a foreign-born artist was initially reviewed as “sloppy,” “bitter,” “sad,” “sick,” and “un-American.” But following the initial shock, The Americans became an important and influential work, changing how photographers see, and how America sees itself. Jack Kerouac (who had followed a similar course as Frank’s across the country) hailed in the book’s introduction, “The humor, the sadness, the EVERYTHING-ness and American-ness of these pictures!” 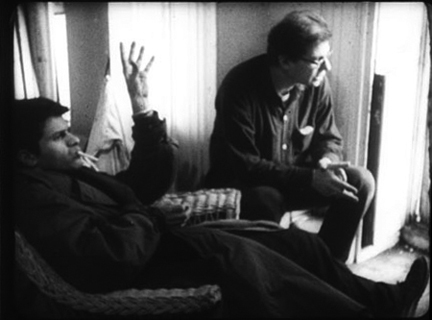 Still image from the 16mm film Pull My Daisy by Robert Frank and Alfred Leslie, 1959.

If you’re at all familiar with Robert Frank, you likely already know something about The Americans. Less commonly known is that Frank turned from still photography to his lifelong passion of filmmaking immediately after completing the book. In fact, he was already working with Jack Kerouac and painter Alfred Leslie on his first film, Pull My Daisy, before The Americans was published. The film is written and narrated by Kerouac, and features Beat writers Allen Ginsberg, Gregory Corso, and Peter Orlovsky, as well as Delphine Seyrig, jazz musician David Amram, and artist Larry Rivers. Like The Americans, the cinematography has Frank’s natural balance of bold and delicate, clean and gritty, controlled and free. And overall, the film somehow seems simultaneously frivolous and urgent. In 1959 (the same year that The Americans was published), Pull My Daisy premiered in New York on a bill with John Cassavetes’ film, Shadows. It was hailed by Jonas Mekas as “the first truly Beat film.” This intimate, goofy, 30-minute moving-image poem encouraged many filmmakers to explore freer, more improvisational and immediate cinematic experiences, and it’s acknowledged as one of a few films that signaled the emergence of underground film, or New American Cinema.

The MFAH has had a long relationship with Frank. In conjunction with their 1986 retrospective of his work, the museum purchased many of Frank’s photographs including a complete set of The Americans, and also became the official archive and distributor of his films. The opening weekend of American Made is a rare chance to see, together, photographs from Frank’s legendary cross-country trip and his influential first film– all from the bubbling America of the mid-late 1950s. The exhibition features a selection of twenty photographs from The Americans (with three additional photographs from the series also on view in the hall near the Brown Auditorium as part of the Public Dress photography installation). While the photos will be on view for the duration of the show, the museum will present special, free screenings of a 16mm film print of Pull My Daisy during the opening weekend only. Pull My Daisy, paired with Frank’s later film This Song For Jack (dedicated to Jack Kerouac), screens at 1PM on both Saturday, July 7th and Sunday, July 8th. Each film is approximately 30 minutes, for a total running time of about one hour.

Frank’s photographs and films–the latest works included in the wide-ranging exhibition (and also stark, black and white standouts in what looks to be a very colorful show)– are a good place to start the American Made journey, and I think make for fitting reflection on the country’s birthday.