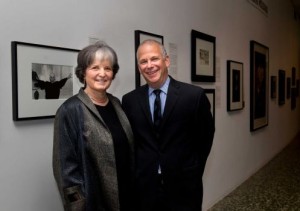 Tucker was hired in 1976 to establish a Department of Photography and to build a collection, which at the time stood at 141 images. Now considered one of the world’s leading photography collections, the MFAH has more than 29,000 photographs by some 4,000 artists. There are very serious works in the collection, ranging from early Bauhaus to contemporary Mexican photography; they have almost 100 Edward Steichen photographs as well as the definitive Robert Frank collection, which includes the entire The Americans series and most of his films. Tucker brought in additional collections, including the encyclopedic Manfred Heiting Collection and the collections of Joan Morgenstern and Michael Marvins, both comprehensive holdings of the history of the medium.

Tucker also organized and co-organized some amazing exhibitions over the years, including the recent WAR/PHOTOGRAPHY: Images of Armed Conflict and Its Aftermath (2012), which is still on tour. Her success in both collecting and curating led the smart, accessible, and seemingly tireless Tucker to be named America’s Best Curator by TIME magazine in 2001.

Those are some incredibly big shoes to fill, but Daniel could be up to the task. A specialist in the early history of photography in France and Great Britain, Daniel has curated or co-curated 25 exhibitions during his 23-year tenure at the Metropolitan. “It’s a privilege to be able to work with Malcolm Daniel for 18 months,” says Tucker, “as he leads the Department, its program and the collections into this new and exciting chapter.” Daniel will start his new position as Curator in Charge of the Department of Photography and Curator of Special Projects on December 9, working alongside Tucker until her retirement.