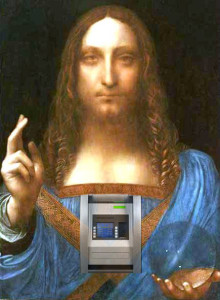 The Dallas Museum of Art’s splashy failed bid for Leonardo Da Vinci’s Salvator Mundi last year has given the money tree a hearty shake; even though the orb-carrying savior won’t be drawing crowds to the DMA, a new $17 million endowment for the acquisition of pre-1700 European art might make it possible to buy a few very nice but not newsworthy runners-up, as if in fulfillment of my December, 2012 prophecy: “More likely, the Leonardo is a stalking horse: bait that will flush cash out of the bushes that can them be re-targeted for more sensible, but less showy, acquisitions.”

The museum announced the major gift from DMA trustee and past chairman Marguerite Steed Hoffman on Thursday. The gift creates a $13,600,000 restricted acquisitions endowment and a $3,400,000 operating endowment in support of pre-1700 European acquisitions, exhibitions, and programs. The new funds more than double the DMA’s acquisition endowment, and bring the amount the DMS has to spend on new art up to $50 million. (Even with the new cash, the Leonardo, with an asking price of $200 million, was pie in the sky.)

Marguerite and Robert Hoffman were already big donors. In February 2005, along with Cindy and Howard Rachofsky, and Deedie and Rusty Rose, they gifted a collection of modern and contemporary art to the DMA as incentive for the Centennial Campaign which they chaired, and which ultimately raised $185 million for the museum.