Flower of the Prairie: George Grosz in Dallas at the Dallas Museum of Art

by Betsy Lewis May 24, 2012
FacebookTwitterEmail

A forgotten series called Impressions of Dallas, last exhibited almost 60 years ago in New York City and exactly 60 years ago in its namesake, has been resuscitated by the Dallas Museum of Art’s European Art curator, the terrific Heather MacDonald. Flower of the Prairie: George Grosz in Dallas conveys a prominent outsider’s dreamy Texas metropolis, capturing the city’s booming energy at a time of racial segregation and blatant sexism, and bittersweet mid-century innocence.

Grosz, a prominent artist of the Berlin Dada, found a haven in America from the rising, pre-Hitler Nazi party in 1932. Coming to Texas at the invitation of department store bigwig Leon Harris, Grosz fully embraced the sprawling prairie city circa 1952: winged divine horse Pegasus hovers over the Dallas skyline; the city’s pretty young women, both black and white, sashay the streets unescorted; and cowboys really do exist.

While earlier works are sharply outlined satires of darkening German politics, Grosz adopted a style for the Dallas series that’s thrilled to be dancing, dressing up, and falling for its subject matter. The watercolor forms of Dallas Broadway (1952) look uncannily lucid; the city’s writhing neon street signs melt into the hustle on the streets. (That the painting could be any city center is only a minor impediment.)  Dallas Skyline (1952) introduces a peppy coming-of-age postcard with protracted blue sky. I’d know that sky anywhere—that’s a Dallas sky for sure, as we’re not keen on sharing—and its only interruptions are a single spire and our flying equine oil icon. The buildings in the painting really are that color, and Pegasus still flies at the heart of the city, a tiny Shetland pony among skyscrapers.  If you live here, it’s impossible not to have a deeply personal connection to this exhibition, and if you grew up here, it’s impossible not to get a little sentimental. This is Dallas 25 whole years before it started sloganeering its own pretension on network television.

Final kudos to the band of writers, editors, photographers, imaging specialists, multimedia producers, and technology wizards on the DMA staff, for collaborating on a very fine, forward-thinking e-catalogue which maintains the essence of the exhibition upon the quiet gravitas of the Apple iPad.  Welcome to Dallas, Robert Stein. 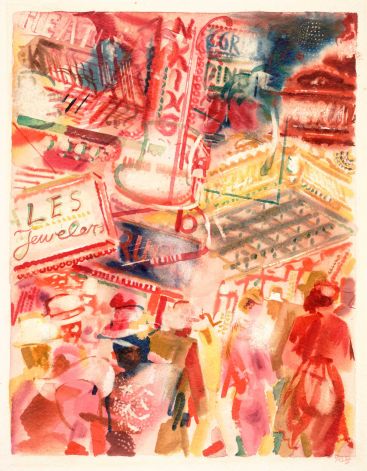 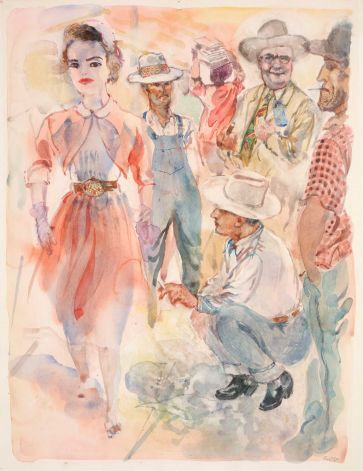 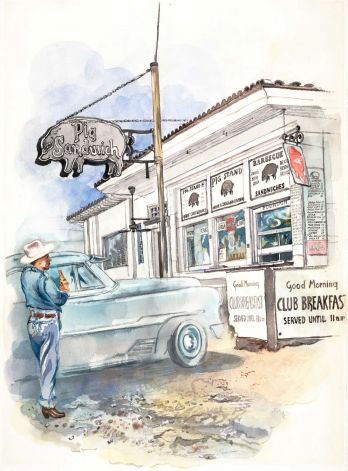 Flower of the Prairie: George Grosz in Dallas runs through August 19th at the Dallas Museum of Art. It was curated by Dr. Heather MacDonald.

Betsy Lewis is a Dallas writer who spotted four different books on George Grosz and one cantankerous old man named McMurtry at Booked Up in Archer City last weekend.

Even though I did not grow up in Dallas, nor particularly fond of the city, looking at these paintings makes me wistful. It’s the same feeling one gets when he/she remembers a book read long ago about a place he/she has never been to.

Wonder if George wasn’t toured thru Little Mexico — surely he was introduced to a li’l Margarita!

The different themes and feelings Dallas inspired Grosz to put on canvas is both strange and fascinating.