In his Glasstire preview, Peter Lucas described the selection of films at CineMarfa as a “deep-cut mix tape,” and I agree with the statement and its neutrality. CineMarfa as an entity, or an activity, doesn’t need to have each movie reviewed individually. So what’s a critic to do?

My fingers have already slipped and tipped my hand. It is inadequate to describe CineMarfa as a sequence of films, when the festival incorporated other activities into the logic of its screening program. Here are some observations about three not-strictly-cinematic aspects of CineMarfa 2014. 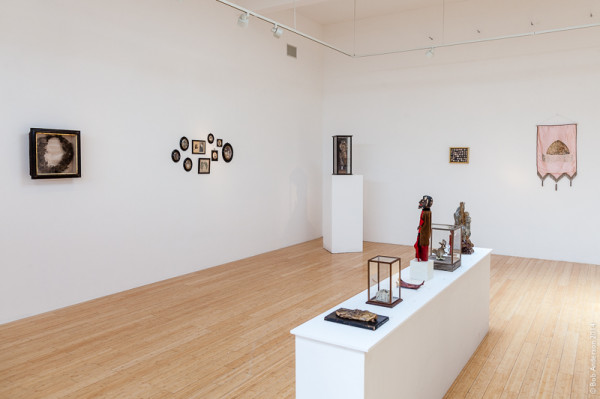 I. Spooky Action At a Distance

Artist Hernan Bas loaned a selection of curios from his personal collection for this sweet little exhibition. No general statement will quite encapsulate it, but the 45 items on display share a memento mori quality: they commemorate the dead, capture ghosts, summon irregularities of a physical sort, and otherwise ask us to consider “haunted” in a non-metaphorical way.  The objects are superbly well-chosen and in pristine condition, even though many date to the 19th century.

The possible presence of actual ghosts—even in the brightly lit gallery of Marfa Book Company—set the tone for the film program of CineMarfa, most of which dealt with death, spirits, or the supernatural in some way. Most objects invoke the departed through an image—tintypes, drawings, statues, photographs, and so on. Especially since the advent of photography, images of this sort aim to capture their subject’s essence in some direct but ethereal way. Other objects on display here use a more ancient talismanic approach, as in the “mourning art” wreath constructed of human hair. The physical remainder is asked to stand in, to be enough, to be presence, when absence is too true and too much. 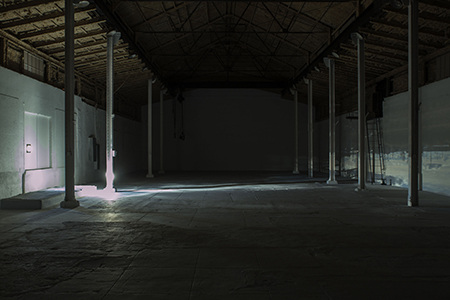 [Full disclosure: like many Marfa residents, I scrounge my income from multiple sources, and The Chinati Foundation is one of those sources. I’m a docent and give tours of the collection, and they pay me to do it.]

On Saturday morning, May 3, Thomas Beard of Light Industry in Brooklyn and Zoe Leonard, also of New York, sat down for a conversation in Leonard’s 100 North Nevill Street, an example of her camera obscura works presented by the Chinati Foundation. This otherwise standard artist’s talk took place in the darkened space of Chinati’s Ice Plant, which has been temporarily converted into Leonard’s camera. The guests, seated in folding chairs, craned both their eyes and ears to make out the goings-on. Meanwhile, the bright sun of the high desert, pinched by the camera lens, fell palely on the faces of Beard and Leonard as they meandered their way through the origins and functions of Leonard’s engagement with the history of photography. Leonard was polished; Beard struggled: he didn’t manage to avoid a few jargon-addled shaggy-dog questions.

Critiques of their performances aside, some interesting ideas came up that relate back to this shaggy-dog ramble of my own. Leonard compared the inverted image of a camera obscura to the upside-down image striking our own retinas. In human cognition, the brain corrects the image and we remain unaware of our physiology. The image on the wall of the camera, then, is akin to the unprocessed image in our eyes, and we have the opportunity to see it without our brains getting in the way, as it were. The fact that a dark, empty building is the site of this image allows us to extends the metaphor: the viewer becomes a homunculus inside an empty architectural head, prompting a perceptually-unmediated dark-night-of-the-soul, in the blazing midday sun.

III. Ghost In The Machine

The Passion of Joan of Arc, with a live score by Cat Power, at the Crowley Theater

In brief: A screening of Carl Theodor Dreyer’s 1928 silent film The Passion of Joan of Arc, with the band Cat Power onstage providing a live soundtrack, first with solo electric guitar and vocals, then concluding with solo piano and vocals. As an event to witness in person, it was spectacular. The film is a masterpiece, and singer Chan Marshall’s choice of songs was tied to the narrative without being illustrative or liturgical. It was draining and thrilling.

Now, typically I would have nothing to say about a woman’s hair style in the context of an analytical review. That would be gross. But since I am not a close follower of Marshall’s career or personal style choices, it was my first time seeing her with close-cropped locks, and I could not avoid thinking that she looked remarkably like Renée Jeanne Falconetti, the star of the film. The combination of Dreyer’s psychologically (and numerically) unrelenting close-ups and Marshall’s soulful lament created a kind of double-presence, a disorienting effect that generated deep contradictions, like all the best art.

This double-presence thing needs a bit more elaboration. I’m not equipped to wade too far into cinema theory, but it does seem that moving pictures are the most astonishing of all human inventions in terms of capturing the past, and freezing it in place. There the people are, as they looked, and moved, and talked (sort of), 80 years ago! Still young! So in that sense, the cinema makes the past into the present again with a potency unavailable to any other art form. Including a live person on the stage—indeed, one who rather looks like the star of the movie—turns this rehabilitation of the past into an uncomfortable bit of identity confusion. Chan Marshall was not Joan of Arc, and neither was she Falconetti, but on some level, the heart wanted it to be that way. We want Joan not just resuscitated on screen, but real.

I’ve so far skirted around the point of these ghosts and presences and unmediated states. I propose that the thematic thread joining these three events is based on an artistic desire for a deep, true, and unencumbered connection with one’s audience (or, more fundamentally, with “the other”). This desire is as old as art. And just as old is the artists’ feeling that they have come up short. Their medium is not up to the task, or at least not their command of it. Wouldn’t it be great if we could skip the medium and just go straight to the connection? Like, in the way that a ghost is not embodied, it just exists as pure spirit apart from corporeality? Wouldn’t that be divine? So to speak?

To take that one step further, this anxiety seems heightened by the advancing digitalization of contemporary life. There are plenty of arguments on all sides of that subject, but in the present context, the point is not the immateriality of the digital sphere. Clinging to the materiality of film stock or any other substrate is an impotent form of resistance because it misdiagnoses the problem. The anxiety-inducing character of the digital world is that there is no empty space inside it, no room for the unexplained. The logic of electronic code is that everything can be modeled with its tools, it is just a matter of time and disk space. And when all the spaces are filled in, rendered in high resolution, what will be of ghosts? The anxiety is that belief will be moot, the equation will be solved, and ghosts really will cease to exist.

Until that grim wonderful day, let’s think about Joan, brought back by Falconetti, passing upside-down through Dreyer’s lens, getting her hair lopped off… and let’s hope for someone off-screen to gather it in a “mourning wreath,” woven like a crown, for us to lay on Cat Power’s piano.