Image via Marfa Says No

I attended CineMarfa back in May. It was my second year to attend the tiny annual film festival held in its namesake town, and I’m so impressed with the instincts of CineMarfa’s organizers, David Hollander and Jennifer Lane, that I’ll encourage those of you who haven’t heard of it or been to consider it a good excuse to make a pilgrimage out west. When people who haven’t been to Marfa ask me when the best time to go is, I generally say: Anytime is great. Which I believe is true. That’s the desert climate for you. But the intimacy and smarts of CineMarfa —the loose structure and thematic headiness of it — could give shape to a Marfa newbie’s visit that may otherwise feel random and diffuse.

Nearly every CineMarfa screening is at the Crowley Theater, and it’s all free admission. Even with a crowd, there are always seats available. The atmosphere and conversation is intense and esoteric, but also funny and disarming. The whole shebang is incredibly informal. The people gathered on the raised front porch of the Crowley before and after screenings bring a bit of the tailgate with them. Outside of the festival’s featured guest filmmakers, pretty much everyone in attendance is local. There’s a selfish part of me that wants the festival to stay contained, organic and specialist. I fear that CineMarfa’s unassuming, undiluted nature and word-of-mouth reputation could unintentionally (if not suddenly) make it very “hot,” especially as all the seekers of the world trample everything in their status-panicked search for an authentic experience.

With that: I tend to hit Marfa at least a few times a year for work, but this last May was the first time I’d been there when I heard directly from locals about the looming possibility of something called the C3 Festival — a proposed big multi-day arts and music festival to be launched on the edge of Marfa in the next year or two. It would take place every year. It’s controversial to say the least, and the spirit of it pretty much directly opposes what CineMarfa accomplishes, or even what the much bigger (but still locally pertinent) annual Chinati Weekend does. C3 is organized by (primarily) outsiders, for outsiders. Its goal is to draw huge crowds to the region — the likes of which Marfa has never accommodated before — and to make a lot of money. A junior Coachella or Burning Man, if you will. (If you think this sounds like a great idea, let’s never grab dinner.) 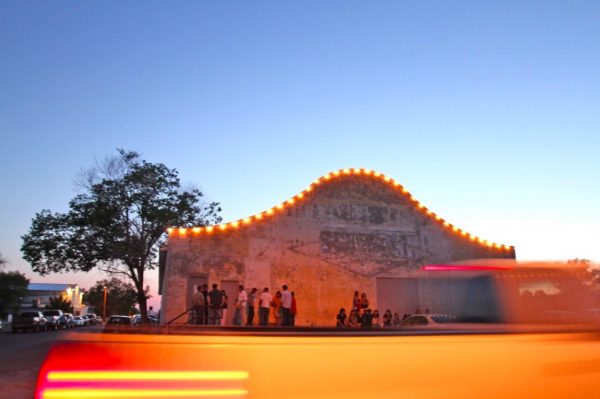 CineMarfa launched in 2011. At the time, the festival’s co-founders/co-directors Hollander and Lane, a couple, were longtime Marfans. (They’ve since moved to San Antonio.) Houston cinephile Peter Lucas has attended and written about CineMarfa for Glasstire off and on since its inception (he once described it as  the best film festival in the state and “simply a well-curated, annual movie mix tape”) but I think it was with his recap of the 2017 CineMarfa that I started to get jealous of his festival trips. Each year, CineMarfa’s programming follows a very loose theme (it allows for some truly abstract and inspired connective tissue between selections) and that year it was “the phenomenon of art activism.” Peter’s description of that year’s programming seduced me into action. I had to go. And this year, my second, when I sat alone amongst a small crowd in the Crowley, watching one fascinating and unlikely selection after another, I was thinking about the C3 Festival, too, and wondering if Marfa has possibly “peaked” (when are we not asking ourselves this?) or if everyone will look back on 2019 as the last year things were still pretty good and recognizable in Marfa… just before C3 blows the lid off of it and Marfa’s tourism economy turns into a giant soapy tit wank. Think of it this way: Joshua Tree makes the news these days for bad and depressing reasons. 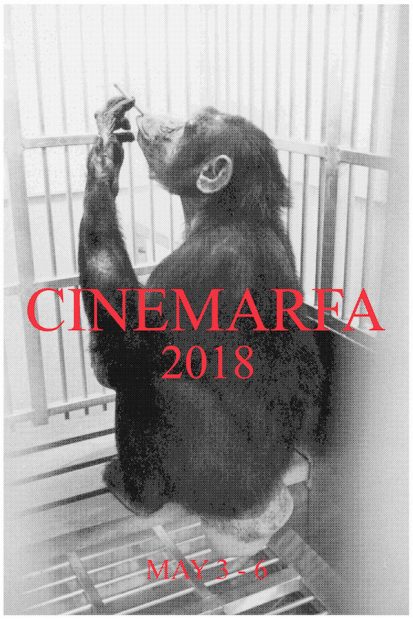 CineMarfa, with all its intelligence and quiet acclaim, stays small. And it feels like Marfa’s growth has a natural cap due to its remoteness. Certainly, starry-eyed city slickers make their Marfa pilgrimage and get romantic about it and buy a house there (in good faith!) and renovate it “very tastefully” and at great expense, and then sell it three years later because Marfa is totally a bitch to get to, unless you have a private jet and can fly right onto that landing strip north of town. But even those people, with few exceptions, sell their Marfa houses eventually. Marfa’s stable population has not grown a whit in years. And it probably won’t. But that doesn’t mean that a mass of potential interlopers — ahem, tourists — has peaked, or even started to. (And I do realize that once upon a time, Judd himself was an interloper.)

I’m a tourist in Marfa. I have no designs on the town. I can certainly, on behalf of my friends who live there and my own disposition, continue with a “get off my lawn” attitude about more tourists showing up (especially Coachella types), and that’s an honest reflex. Increasingly, tourists land in Marfa and truly have no idea about how to interact with it. I’m a little freaked out when, these days, I’m walking past Marfa’s Saint George Hotel and see two silvery retirees in full-on golfing attire and matching purple visors step out from the lobby, blinking in the bright sunlight and asking each other, “So what is there to even do here?” 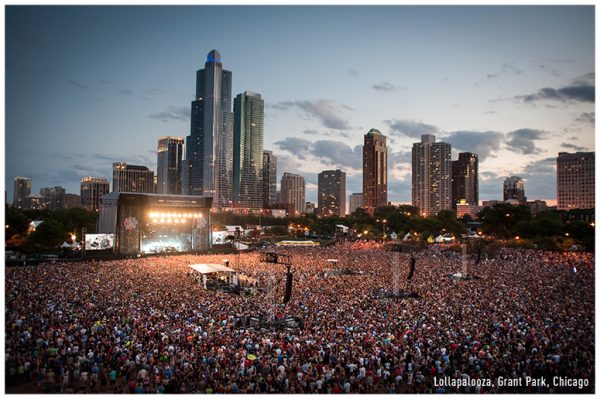 C3 Presents, the company that wants to launch the C3 Festival, organizes Austin City Limits and the Lollapalooza festival franchise, among other international events. Austin City Limits and Lollapalooza, according to C3’s critics, each draw crowds of more than 75,000 people. Along with this, keep in mind that resort destinations (like Cape Cod or Jackson WY) during peak season can swell to many, many times their permanent populations. Regions court that industry. Some people in West Texas would, too. It’s a package deal. When I look at real estate listings in Presidio or its neighboring counties right now — the Marfa region — I see a tremendous number of listings for small parcels of land that are earmarked for gated, resort-style residential development. Gated against what? Tarantulas and mule deer? I understand that change is inevitable, but does it have to be invited in on the back of deal with some devil or other?

Still from “The Challenge”

Again, I take comfort in something that CineMarfa symbolizes in the region. By and for the people, welcoming to visitors while being respectful and proportionate to Marfa itself. This year, CineMarfa’s theme was loose even by CineMarfa standards (and still made for a great festival): it was “Experience.” We watched, among other things, a dazzling documentary about Dashi (the Japanese staple), a wonderfully experimental and trippy film about California’s oldest freeway, a doc about a famous act of nonviolent civil disobedience, a Doris Wishman exploitation flick, and the monumental and heartbreaking 1963 Visconti classic The Leopard (Marfa resident Carolyn Pfeiffer worked on it). There was an unsettling (for me) documentary about Saudi royalty’s obsession with falconry and cars, and a super-8 short by Marfa’s David Fenster and writer Eileen Myles. The festival crowd ebbed and flowed. The town felt very quiet that weekend, very unguarded.

Meanwhile: A few miles outside of town, new retirees are building houses on future-gated land. Marfa braces for C3. And CineMarfa will happen next year, and probably the next, and I’ll be there.

Christina, I agree with you. As a person who lives and works in a rural area, I feel that if you live in Marfa or work at one of the arts organizations there, you would be foolish to go along with a concert, or any event, on the C3 scale. What better way to alienate the local community from your institution’s mission, ruin a delicate environment, and whatever else goes with a mass of humanity crammed together. It runs counter to the reason most people want to visit rural art destinations—to get away from the chaos of cities, see some vistas/nature, and get an art fix. The landowner who offers the venue site needs to carefully consider their decision regardless of how much money is promised.

I share your concern. However, I think The real Marfa will prevail. Presidio was too hot for gated resort communities before climate change kicked in. It is damn sure too hot now. There is also the water problem—there is not enough for tournament quality golf courses. I think that area has room for one resort, and Cibola Creek has the franchise.

C3 is worrisome. With enough alcohol and hemp, Wall Streeters might be comfortable for a day or two in the desert. But C3 is likely to be a tough sale on a year on year basis. Picture this: 45 year old derivatives trader tells his wife that he has to go to the West Coast on business, picks up his 25 years old girl friend, and assures her that despite having never heard of Marfa or C3 she will have a great time at the festival. They fly to Midland hoping to pick up the Porsche he had reserved, but had to take a Camry. They drive into Alpine heading for Marfa and see a lot of cars turning into the Paisano Baptist Camp Meeting. Thinking that they are at C3, they follow. They are trapped there for a weekend of preaching and singing. They can’t leave until they make a decision to follow Jesus and experience a full immersion baptism. I don’t think they will be back the next year. Neither will the other Yankees who take an alternate road to Marfa and find themselves at the Bloys Camp Meeting.

All those hedgefund guys love Burning Man. I suspect they’ll be able to survive the heat at C3.