by Peter Lucas May 15, 2017
FacebookTwitterEmail 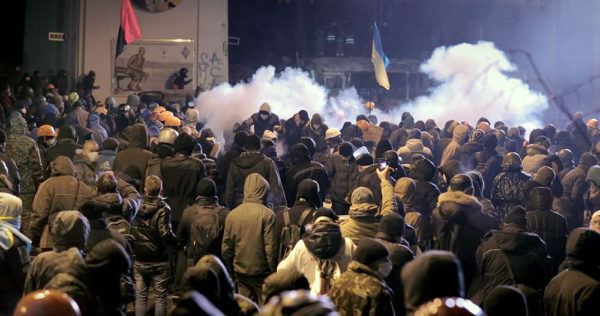 Each spring, the small, artist-run CineMarfa Festival presents an eclectic mix of experimental and documentary film and video works in the dusty West Texas art enclave it’s named after. Though its programming rivals that of higher-profile metropolitan film festivals, museums, and arts organizations, CineMarfa is a purposely intimate, casual affair. There’s no hype, no VIP badges or merch for sale, no lengthy program notes nor confusing schedule of overlapping events to navigate. It’s simply a series of unique cinematic experiences, laid out over four days in May as a montage of creative nudges and existential echoes. Each year there’s a different thematic direction, though it’s loose and organic enough for audiences to find their own holds. And though it’s not necessary, organizers David Hollander and Jennifer Lane design things with the hope that people will attend more than just one or two of the screenings and events, and that cumulatively, the various programs will activate a building conversation of ideas in the mind.

I travelled out for the festival from Houston last week, as I’ve done a handful of times since it began in 2011. The day-long trek away from the frictions and distractions of urban civilization and into the open skies and unearthly terrains of the Big Bend area has been an important part of my previous CineMarfa experiences. Especially in this particularly turbulent year, I was really counting on the long stretch of fast movement through slow-motion space-time to clear some psychic static and land me in a far, quiet plane for reflection. I knew, going in, that this year’s festival centered on ideas of resistance, and that I’d likely be challenged by issues closely related to the socio-political frustrations I was attempting to outrun. Yeah, I got that irony. What I hadn’t acknowledged until I’d arrived was that West Texas isn’t so far from civilization’s meddling anymore. Since I’d last visited, a long, steel vein has been laid in the land, and has begun continuously pumping fresh frack across the area and under the border into Mexico. At the same time, a huge Mexico border wall running through one of our country’s biggest and most striking national parks seems inevitable. This irony was tougher to shake, and the implications of these land manipulations provided the mental backdrop for my festival experience.

CineMarfa 2017 began with a bold cinematic immersion. Following a brief opening reception, the audience was dropped into a crowd of half a million Ukrainian protesters in Kiev’s Independence Square during the winter of 2013-14. Maidan by filmmaker Sergei Loznitsa premiered at the Cannes Film Festival in 2014, but despite wide critical acclaim it saw only a very limited release here in the U.S. The film is a remarkable, long-duration document of the massive protests in Ukraine against the regime of president Viktor Yanukovych that led to his ousting a few years ago. Maidan includes no contextual narration, commentary interviews, or news footage. Rather, its series of simple, long-held static compositions—each a brilliant film in and of itself—emphasizes details of the people, the space, and shifts in emotion and activity as things escalate from peaceful rallies, to bloody police confrontations, to mournful memorial services. Maidan seemed, to me, something like a nature documentary, keenly observing intersecting actions, collaborations, movements, and messages amidst an exhausting mass exertion of independence. This complex, organic film made a strong impression, and established a wide frame of inquiry for me in the coming programs.

Another very different documentary in the festival chronicled resistance a little closer to home and closer to now. The film Awake: A Dream of Standing Rock, which had its world premiere at the Tribeca Film Festival two weeks prior, pooled the efforts of three filmmakers to tell the story of the Native-led protests against the construction of the Dakota Access Pipeline through sovereign land and under the Missouri River—a water source for the Standing Rock Sioux Tribe and millions of others downstream. Like many, I followed this struggle via online video snippets and reports, but this feature-length film, now available online, better illuminates the inspiring peaceful resistance, the brutal pushback of the police and corporate forces, and the ultimate disappointment in its failure to stop the invasive and dangerous pipeline. 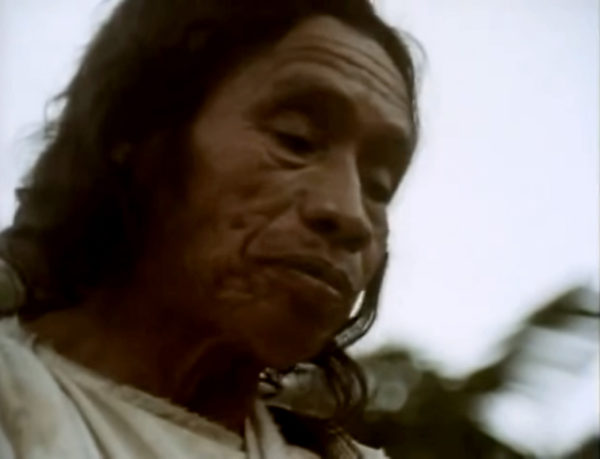 Marfa-based filmmaker and festival Advisory Board member Joe Cashiola organized CineMarfa’s screening of the 1990 documentary From the Heart of the World: The Elder Brothers Warning about the last functioning Pre-Columbian-era indigenous society and their warning of Earth’s destruction. Descendants of the great Tyrona civilization, the Kogi were driven to live in seclusion in the Sierra Nevada mountains after the Spanish arrived in 1514. Conquistador Rodrigo de Bastidas had a declaration read aloud when he landed that began: “I assure you that with the help of God I will make war on you in every place and in every way that I can… I will take your persons and your women and your children and I will make them slaves. I will take your goods, and I will do you all the evils and harms which I can.” He wasn’t lying. Understandably, the Kogi haven’t been too open to outsiders in the centuries since. But given their deeply held obligations as guardians of all life on the planet, they granted British filmmaker Alan Ereira rare entrance into their mountain village on the condition that he tell the “younger brothers” in the rest of the world that if our selfish, destructive ways are not changed, the planet will die.

As much as societal clashes, From The Heart Of The World is about humans’ various relationships with and manipulations of the earth, and this tuned my perception of the festival’s through-line in that direction. A scene in that film captures robbers as they unearth an ancient tomb of Kogi ancestors in hopes to pillage gold, and completely destroy it in the process. That image—that hole in the ground—echoed as I saw Silueta Sangrienta and Grass Breathing—two earth-body action-forms in a program of rarely seen films by Cuban-American artist Ana Mendieta made in the 1970s and early ’80s. It also resonated as I saw a program of short films about the local resistance to the Trans-Pecos Pipeline, and as I thought back to the Standing Rock resistance to the Dakota Access Pipeline.

In this mindset, the new short film The Farnsworth Scores by experimental musician Rob Mazurek and filmmaker Lee Anne Schmitt (both in attendance for this world-premiere screening) seemed less about the interaction of music and architecture to me as a meditation on the intersection of natural and manmade environments. Sound artist Alyce Santoro’s talk on experimental music even touched on relevant issues as she mentioned environmental hums and rhythms, social and political applications of music experiments, and various translations between sight, sound, and touch. Ok yes, I admit that by mid-festival I was buried in a tangle of my own loosely drawn connections and wide resistential metaphor. But I’d be fine, unless I witnessed some kind of densely collaged psychological rumination. 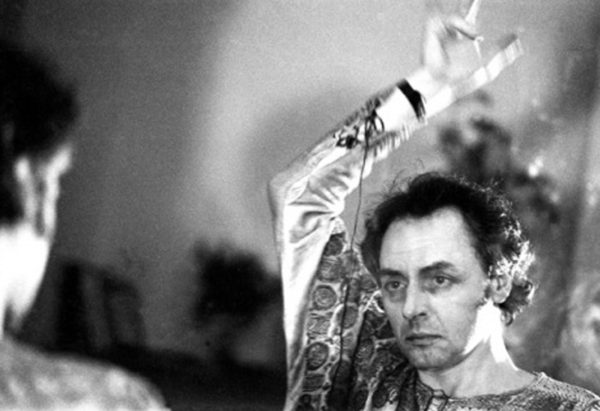 So: Luke Fowler’s densely collaged psychological rumination, All Divided Selves, was a programming contribution from Thomas Beard, director of Light Industry in Brooklyn, Programmer-at-Large for the Film Society of Lincoln Center, and frequent CineMarfa collaborator. Fowler repurposes archival footage relating to radical, guru-like psychiatrist R.D. Laing, who in the late-’60s argued that “normality” required adjustments to an alienating world, and that many labeled as mentally ill are in fact hyper-sane. The appropriated material is mixed with new footage and music. Beard mentioned that he chose this film based on discussions early on in the festival’s programming process about the “Dialectics of Liberation (for the Demystification of Violence)” gathering held 50 years ago in London, at which Laing was a speaker. All Divided Selves is a really sophisticated, multi-layered film, and a distressing experience that, for me, acted as the festival’s centerpiece transition into smaller, fragmented catharses.

The San San Trilogy (The Floating Chain, Scenario in the Shade, and Mercury City) by artists Justin Lowe and Jonah Freeman was presented with an intermittent live score by musicians Matt Sweeney and Jesper Eklow of Endless Boogie. Using as a springboard futurist writer Herman Kahn’s speculation that the coastal area between San Diego and San Francisco would someday grow into one giant metropolis, the work was a near-continuous, choreographed movement through an endless succession of semi-fake objects, old devices, placeless environments, pictures, and architectural models. It was alternately impressive and off-putting in its visual onslaught and absurd collision of high-design manicure and dystopian dishevel. I’m unsure of the artists’ intentions, but in the context of the festival I couldn’t help but read the feed as a comment on mankind’s compulsive overproduction of junk, and perhaps on the futility of comfort.

The festival concluded with two programs of contemporary satire. A showcase of work by Super Deluxe’s Vic Berger focused on his remixed distillations of Jim Bakker and Ted Cruz. Berger’s elongations, repetitions, and overlays make for awkward and masterfully putrid contemporary media trolling that reaches a wide audience—even the targets of his satire—via social media. This was followed by Houston artist Mark Flood’s first film. The consciously crummy feature-length Art Fair Fever pokes fun and middle fingers at the disease of shameless self-promotion and commodification in the art world. It’s an elaborately funny-boring crank call, and it’s coming from inside the house.

CineMarfa’s 2017 mix of fractures and frictions was not easy to digest, but necessary. I’m grateful for the crucial collisions. It’s time for serious consideration of… well, the whole damn thing. My mind was doing a whole lot of philosophical acrobatics along my highway drive home, when I happened to hear a podcast about September 11, 2001 and the couple of days following that disaster. Apparently, the sudden, complete halt of all air traffic and boat shipping into and out of the U.S. and Canada allowed for the cleanest, calmest, quietest oceans in modern history. For a few fleeting days, whales had some peace. I turned off the stereo for a while, and listened for whale songs in the wind.