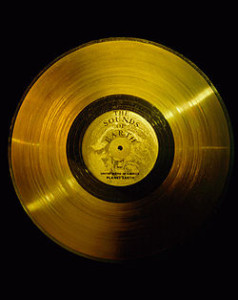 NASA announced today that the Voyager 1, launched in 1977, has now entered interstellar space, making it the first human-made object to leave our solar system and wander into the rest of the galaxy. Although there have been other reports of the crossing (a study in the journal Science suggests that it happened around August 25, 2012), this is the first time that NASA has officially confirmed the event. What NASA and other news reports do not discuss is the Voyager’s famous passenger: the Golden Record.

The Golden Record is an outrageously ambitious human art exhibition, curated by astronomer Carl Sagan, explaining our world to potential neighbors. The phonograph record contains a collection of photographs and diagrams both in black-and-white and color; there’s science, math, chemistry, cultures, animals, food, languages, architecture, and art. The rest of the record is audio—we certainly can’t explain our very essence without throwing in some Mozart and Chuck Berry.

Peter Lucas, who created a remix of the Golden Record in his 2012-2013 multimedia installation Voyager Found, at Houston’s Lawndale Art Center, was overjoyed at today’s announcement. “The scientific achievements here are the real cause for celebration,” but he also noted the absence of Golden Record discussion in the news. “They seem to be doing everything to avoid bringing up the lovely, ridiculous hippie aspect!”