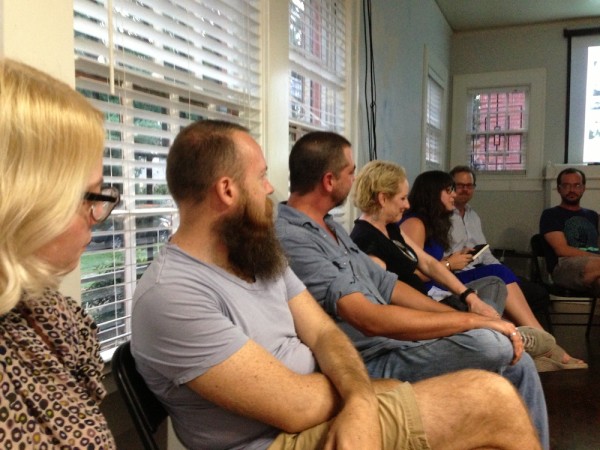 Eighteen people gathered on August 27 in what was once the living room of the house that is now Alabama Song in Houston. Along with the sofas and other furnishings, the air conditioners had gone, leaving a bare white-walled room and eighteen serious, sweaty people on folding chairs. Fourteen men. Four women. Three wristwatches. Ten notebooks.

Why were we there? Good question. In the first part of the event, we introduced ourselves around the circle group-therapy style, and tried to answer it.

Rachel Vogel, the first to introduce herself, began by talking about “action,” making me think it was a protest meeting, and we were going to be griping. Houston artist Patrick Turk and others expressed various flavors of a wish to support art-related activities, which fits me, too; I went to cover a new type of event in the local artworld. Max Fields, the earnest, energetic young curator of the series, mentioned upcoming projects involving narrative, and I thought it would be worth attending. Many other attendees were teachers or young museum staffers, came to compare notes with the main speaker, Houston painter Geoff Hippenstiel, as he told about his experiences teaching Art Appreciation at Houston Community College. 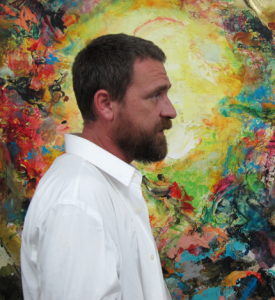 Hippenstiel was an inspiring speaker, the kind of teacher you wish you had had. His first rule: “I always have to be interested myself.” Without too much shoptalk about teacher tricks and tips, he laid out some of his ideas on the unique problems of teaching art to people who are not even slightly interested. (Art Appreciation fulfills a required humanities elective at HCC, and is widely seen as an easy A).

“I give them the final exam on the first day,” he said, right after showing them the bulgy, provocative and ancient Venus of Willendorf. The two questions are “What is Art?” and “Do we need it?” Like all the other assignments in Hippenstiel’s class, the test isn’t multiple choice.

The rest of the semester is comparisons and writing. Hippenstiel talks a lot about having a “conscious viewing experience,” and says that “good contemporary art is accessible to everyone.” The museum he sends them to is the Menil.

His students take photographs and make drawings, explore concepts like scale and color and expression. They study Van Gogh’s Starry Night and analyze the shower scene in Psycho. All straight out of the textbook, but taught by an artist, a man who understands how these things operate in reality, and for whom they are the basis, not for a study, but for a life.

Then we broke into groups for ten minutes of polite, entry-level discussion of Hippenstiel’s exam questions. My group decided art was important, and that art was an experience, and catalyzed shared experiences. Other groups reported similar pat conclusions when we re-convened to wrap up. 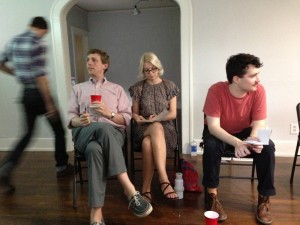 As the beginning of a discussion it was great, except for the air-conditioning. Lacking alcohol, or greater familiarity among the participants, we couldn’t get to any really knotty questions, the kind that degenerates into name-calling and shoe-throwing, but as evidence of a new, younger crowd of Houstonians very seriously interested in talking about art, it was heartening, despite what seems to me inherent impermanence: during the introductions, I finally met Emily Nichol, a recent Rice University grad and a promising Glasstire writer; she announced she was leaving for an internship at MOMA next week.

The Narrative process is an ongoing series of discussions organized by Max Fields and Rachel Vogel at Alabama Song art space, 2521 Oakdale St., in Houston. The discussions are limited to fourteen participants, who must RSVP in advance. For upcoming events, look here.