I’m always on the lookout for zines and self-published ephemera. Even before I was involved in the art scene, I would roam Zine Fest Houston, looking at works by and talking with comic makers, illustrators, poets, and artists. My favorite thing about collecting zines is that no two are alike—people do so many different things with the medium that a festival can host 100 different zinesters that have 100 different ways of executing their ideas.

This is the first post in a series of zine roundups where I pull some zines from my library—some old, some new, some from Texas and some from abroad—and give you the lowdown on who made them and what they’re about. 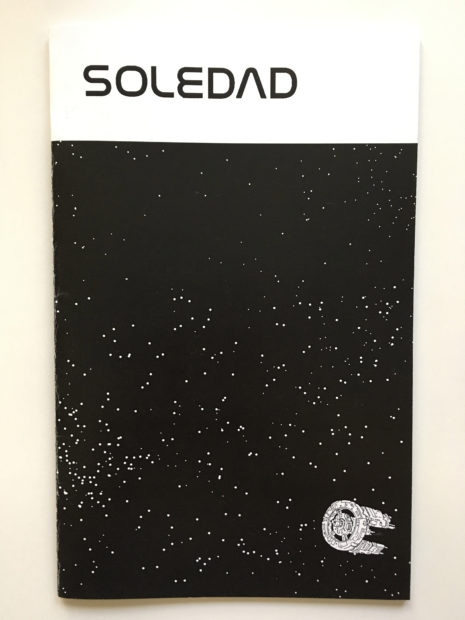 I picked up Gabriel Martinez’s black-and-white comic Soledad at last November’s Zine Fest Houston. The zine is published by Paratext, a small-scale independent book press founded by Martinez along with other Houstonites, Regina Agu, Ronnie Yates and David Feil. Opening on an image of the Soledad, a fantastical spaceship flying through a starry sky, the zine first features little dialogue, relying on Martinez’s high-contrast illustration style to map out the interior and the exterior of the space vessel, and to introduce a man who we later learn is called Thomás.

Thomás’ lengthy voyage is hinted at by a number of factors: his longing to be with his partner who appears cryogenically frozen, his solemn resoluteness in executing daily tasks on board the vessel, and, more pointedly, by the name of his ship. But halfway through the zine, during a video chat with his colleague in which he learns about high-priority cargo on board the Soledad, we see a fire flare up in Thomás’ eyes. He obviously has a vested interest in the cargo, which happens to be the body of a politician who died under unclear circumstances. I won’t spoil the story, but I will say that Martinez leaves the ending open, teasing the possibility of another chapter with the final words “Yr move, amor.” 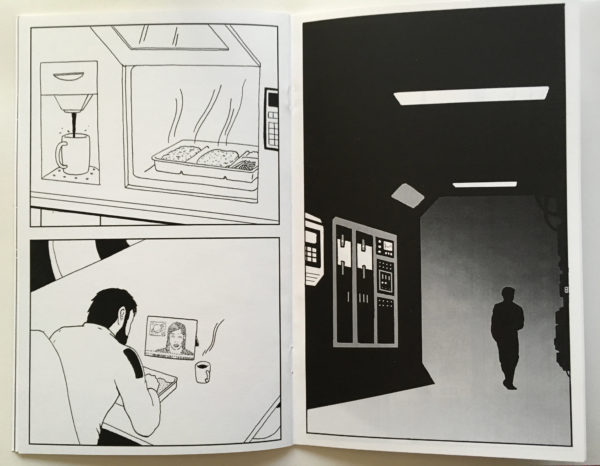 By putting Thomás’ in a setting where he is alone, Martinez creates a word that’s rife with detail, and isn’t spoon-fed to the viewer. Before this zine, I was more familiar with Martinez’s social-practice work than I was with his illustrations; along with Regina Agu, he runs Alabama Song, a residential art space in Houston. But Soledad is so well thought out and poignant that I’m hoping part two comes sooner rather than later. 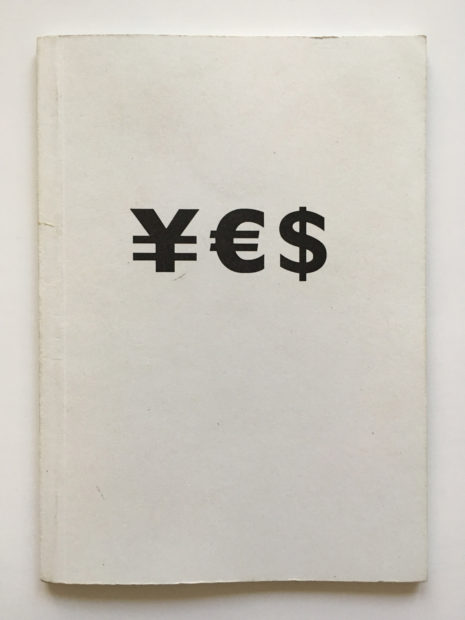 Berlin-based artist Joachim Schmid’s 2016 artist book ¥‎€$ is the perfect self-contained zine. The conceptually driven book, which was published in an edition of 100, uses printed text to explain to the reader how to make money with artist’s books. Taking itself as an example, ¥‎€$ breaks down how a book is priced: its format, the total print run, the kind of paper used, the type of binding, and the number of pages. Of course, Schmid goes on to explain that these details can be manipulated: text can be spread out or condensed, and blank pages can be added to pad the book’s length (as you would expect, the page after this statement is intentionally left blank).

One of the reasons ¥‎€$ is so successful in demonstrating the struggle of zinesters, artists, and anyone who self-publishes, is because it doesn’t just stop at explaining the cost to create a book. Schmid takes the reader inside the mind of the creative and reminds them that artists have to get out in front of people to hock their wares. To table at two book fairs, one in London and one in NYC, Schmid has to upfront €3200 in travel and production expenses—this means copies of ¥‎€$ would have to retail for €32 for Schmid to simply break even. Of course, he is also selling other books at these events, and this offsets the cost. So does the special edition of ¥‎€$, which only has four copies and retails for €120.

I was drawn to Schmid’s artist book because its form perfectly suits its function. One of the main goals of zines is to spread awareness and disseminate information, and ¥‎€$ does this in a funny, relatable, self-reflexive way that quietly tsks at people who complain about the prices of publications (note: New York bookstore McNally Jackson sold this zine for $15). As Schmid writes: “See how difficult it is? And you agree that the artist has to make some money?”

I’ve followed Japanese artist Misaki Kawai ever since I saw her zines at Printed Matter in 2015. In addition to limited-edition artist books and zines, Kawai makes installations, sculptures, paintings, and recently executed a mural on the bottom of a pool during Art Basel Miami. She is known for her crudely drawn characters that are often amorphous and have over exaggerated mouths, breasts, and extremities.

Tarucho Zine is a publication from 2014 that Kawai created in an edition of 100. Each copy is hand-stitched with red thread and folds out into a banner of two-sided drawings that can be read traditionally, or hung in a way that recalls Tibetan prayer flags. While many of Kawai’s characters are comprised of simple black and red squiggles, one panel of the comic sticks out: on the yellow ground is a warped ringed planet that is inscribed with the only text in the zine: “HOME.” This one instance ties the entire publication together; all of these disparate characters, some of whom take on human qualities and some of whom are completely alien, are of another world that exists within Kawai’s mythology. 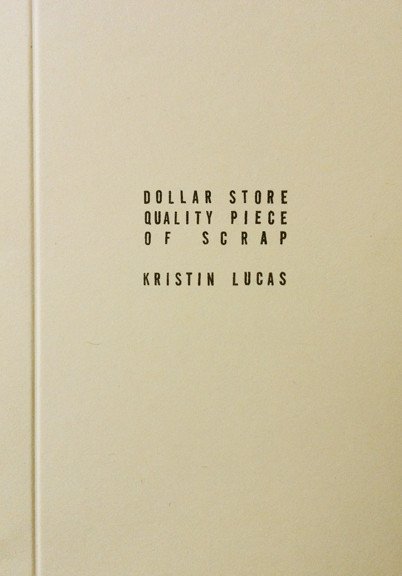 About a year a go, a friend loaned me their copy of Dollar Store Quality Piece of Scrap, a pocket-sized book by artist and University of Texas at Austin Transmedia Assistant Professor Kristin Lucas. The concept of the zine is simple: Lucas compiled found phrases from product reviews into a sixteen-page pamphlet that at once talks about everything and nothing. Throughout the zine, which is formatted as a single run-on paragraph, the reviews could be referencing myriad things: suitcases, sleeping bags, radios, screwdrivers, scissors, and nearly everything in between. 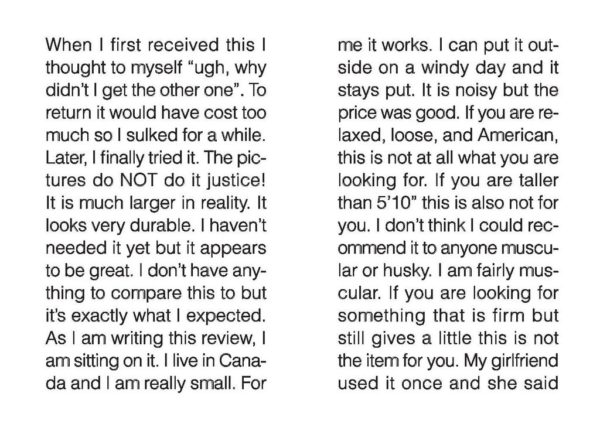 This concept is not the most original subject for a zine; there are many other artists culling data from the internet and manipulating found text—last summer, I published a piece on Glasstire that drew on this idea, and many others had done it before I did. Nonetheless, Lucas’ zine fits well into her oeuvre generally, as she examines how we interact with the new technologies we encounter in our daily lives. All of the fragments in the book were submitted by their original authors as a form of public-access criticism, and by abstracting these ideas, Lucas gives us both a warped and real sense of how people process the world around them.

Ah- you will have to visit Star Comics in LBK next time you are here. Looking forward to more of this segment!