Coming up on its 20th anniversary, Project Row Houses is a powerful presence in Houston’s Third Ward, and has caught the attention of scholars the world over. Eliding trends and status quo institutional practices, Project Row instigates a change so entrenched and deliberate that their success can difficult to track, and is easy to overlook in the local arts landscape.

There is perhaps no one who better exemplifies the impact Project Row Houses has had on the community than Assata Richards. Richards’ involvement with the organization began in 1996, as a participant in their Young Mother’s Program. Since then, Richards has been a professor at the University of Pittsburgh, Vice Chair of the Houston Housing Authority board, and has founded the Sankofa Research Institute. Now, she is back in Houston, teaching at UH, and managing the Young Mother’s Program. She is running for Houston City Council, District D. I met with Richards at Project Row Houses, where we discussed art, politics, and points indistinguishable between the two. 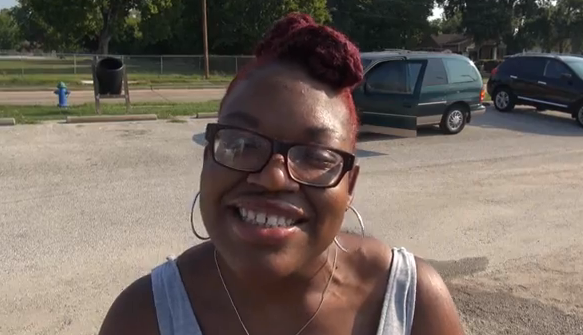 Can you tell me about yourself? What do you here in Houston?

I’m originally from Houston; my grandparents raised me in a community known as South Park because it was one of the first public housing communities that would allow African American families to reside there. I graduated from Jesse H. Jones High School, and my teachers in the community and family all encouraged me, despite being a young mother, to go on to the University of Houston, which I did. And so I went on to UH and had a number of challenges, just being a mother and being a student. It was a big change, a big leap. I was actually in the dorms with my son. And I just struggled academically, and eventually dropped out after a year and half.

It was challenging, just not really being able to adequately take care of him. At one point, me and my son were homeless. Because I had lived in 3rd Ward and someone had known me and knew that my interest was to finish my education, they suggested that I participate in the Young Mother’s Program [at Project Row Houses]. And I got admitted into that program in 1996.

You were one of how many mothers?

One of five. The first year that program was created. I finished university in 1999 and had worked with a professor there who encouraged me to go to graduate school, which I had no idea about. On a fellowship, me and my son went to Pennsylvania and I entered the PhD Sociology program at Penn State University and then became a professor of sociology at the University of Pittsburgh. In 2008, I decided that I did want to come back to my community. I was researching community, I was involved in community, but I was not part of a community. And that was significant to me. And so I decided to come back to Project Row Houses and work with the Young Mother’s Program. And that has eventually led to me serving as the program’s manager.

What can art do for a community? Have you ever been in a position where you have had to advocate for the value of art in a civic setting?

We had these conversations when we did community forums and I feel like, even at the housing authority, one of the things that I asked us to do is put out a national search for architects. I was really advocating moving beyond this very traditional idea of building structures to the idea that art should stimulate, create, invigorate. Bring life in many ways. So I feel like I am constantly arguing for the principles of art. And art is really about creativity, about the ability to transform and produce from the resources you have, and bring resources in. My approach is that I am always advocating for art, whether for resources, or preservation of a particular structure as an investment. We see ourselves as artists in the pursuit of creativity, creativity in that we are creating community.

Would you say that’s how art has most informed your current venture into politics?

Yes. Absolutely. And the idea that we can find resources. Artists think about ideas; they think about new forms, new creations, and are resourceful. They are always looking for resources to bring to fruition whatever it is that they want to produce and to offer. And so I find I use that in politics. To always see it from an asset versus a deficit model. In the community, I am talking about the assets, the resources we have, and how can we build and create using what we have.

That’s what artists can provide in a political arena. But to flip the question, what do politicians understand about community that artists have not quite tapped into yet?

How do you define success here at Project Row Houses?

Our goal is transformation and revitalization, and our success is [measured by] a constant set of challenges and our ability to meet them. We’re successful when we are able to meet the needs of our community, and to meet their needs we have to be connected and embedded to understand what those needs are. If we’re connected, and in the business of transforming people and place, then we’re successful. And that’s an ongoing process. You just don’t get there, because the challenges change every single day.

Artists are flexible, and we’ve got to remember those principles when we’re working. That makes us better artists.

You’ve hit on something really key to Project Row Houses when you said, “that makes us better artists.” The “us” is not defined.

Everyone we intersect with has an opportunity, and is encouraged to be an artist. If we think about art as creativity, that is something that is open. Even in the Young Mother’s Program, we consider the young mothers as artists-in-residence. They are artists and what they are creating is their life.

I understood that in my [Young Mother’s Program] group, when there were five of us and one was an artist and, this being an art organization, I felt that she was more aligned with it than I was. One day, I was writing out my menu for the week, and Rick [Lowe] said you do that every week? And I said yes, I write the menu so I can create the grocery list. And he said well, why do you do that? I do it so I can organize and make sure we eat and that things are taken care of, so I have time to do my homework and take care of my son. And then I brought up this thing that I wish I was an artist. And he said you are an artist. You’re creating a solution to the problem that you have, which is time and resources. You are creating a solution. And that’s what artists do. They create. And they are really great artists when they create solutions to problems that affect communities and people.

And so that has stayed with me, and that’s a concept that we try to infuse throughout our program. To try and allow for people to understand that they have the ability effect change within themselves and within the social world around them.

My creative practice will be community-centered leadership. This idea that we don’t lead for people, but we lead with people. It’s very similar to what we do at Project Row Houses. We don’t work on behalf of the community, we work with the community. It’s what I do at the [Sankofa] Research Institute. The community is the one to set the research questions and to decide the methods. They are the ones we employ to go out and collect the data and undertake the research. They are the ones that we teach and instruct on how to analyze the data. They own the process and they own the findings. That’s the model that I want to take to city council.

We will have a town hall meeting and we will create an agenda. What is important to us? What is going to be my role; what is going to be your role? And how do we prioritize? It is important for communities to know that you get out of the process what you put into the process. If you only put in a vote, you only get a vote out. We need to have a continuous relationship with the community. My job is going to be my practice, and a practice that will engage more people from the beginning to the end.

Is there a moment that’s really stuck with you since the campaign process began?

Many times, campaigning is at fundraising events to garner the ability to mobilize, but it’s not in the community, on the streets. So my favorite thing to do is getting the votes, it’s block walking. And for me, it simplifies everything. And I love it because it reminds me why I want to do this. When we are in candidate forums, part of what politicians do is they talk about problems, so that they can talk a lot about the solutions that they are going to bring about. So it can be a bit discouraging if you listen to politicians, because they constantly talk about what’s not going right. But that’s not where I come from. I come from a community where we are getting some stuff right. And that excites me. I’m a social scientist, I’m a researcher. I have a community that’s about helping people find solutions and perfect and refine what they are trying to do. I am in a different space. I feel myself constantly saying, wait a second, it’s not all bad. And when I am in the community, that is validated.

Assata Richards is one  of 12 candidates competing to replace term-limited city councilwoman Wanda Adams in the upcoming election on May 11, 2013. 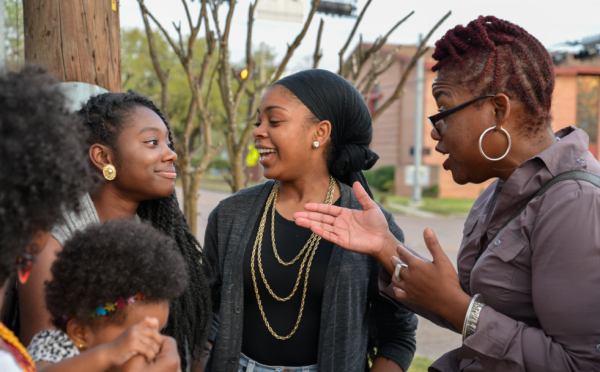