Frieze New York, or How I Learned What You Can Get Away With

If I ever find myself in an art conversation about someone’s kid “being able to do that,” I’m usually one of the first to come to art’s defense. I usually try to answer questions like “Why?” and that horrible phrase that comes in so many different inflections: “I don’t get it.” A topic for its own essay, perhaps. I enjoyed much of the work I saw in the Big Apple over the second week of May, but it occurred to me as I was wandering through the booths at Frieze New York that I was both thrilled to be looking and fatigued by the idea of having to explain to anyone else what was going on there.

The other fair happening, Pulse New York (the one I was really there for, but more on that later) was smaller and, honestly, a bit easier to digest, but Frieze is the one with all the hype—and three cafes. Wood-paneled porta-potty complexes. A VIP room. Massive air-conditioned tents isolated on Randall’s Island Park. Quite appropriate on an island of its own, I thought. I popped into a few Chelsea galleries as well, and a quick recap of highlights shall now ensue, in two parts. 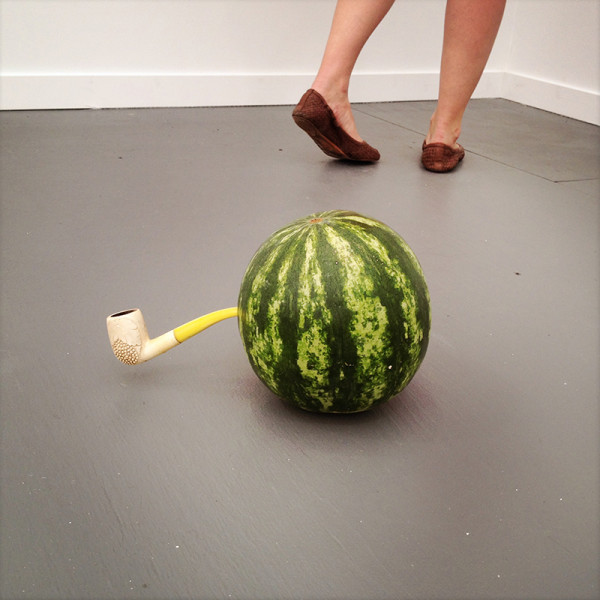 Like I said, I’m all about helping explain why an artist might do something, or why a gallery might show it. But, seriously. I guess this could be a Magritte reference. It’s a watermelon with a pipe stuck in it.

Here’s an installation with some whoopee cushions spread out on the floor. This booth had a black-suited attendant watching over the whoopees. I asked him if he wanted to step on one, and he said he’d been thinking about it all day. 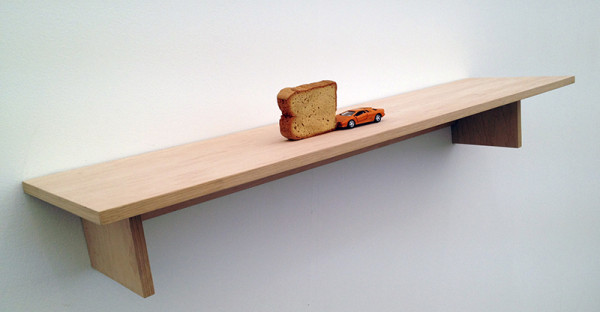 I like this. Put a little car on a slanted shelf, and balance it nicely with a piece of cake. I could totally do this. Not out of spite, but just because. A whole series of these please!

Here’s some more food. That’s a pizza on the wall, a big koosh ball in the foreground, a Twinkie and a Ding Dong in the back. And a sculpture of a video camera with a piece of bread behind it. Lots of people were taking their photo with the pizza and the bread. Makes sense, right? By the way, the best piece in the booth was the pea. Yes, a single pea, on its own wall. I didn’t take a photo of it because everyone was crowding around and blocking the view. But somehow appropriate that, in the midst of all this top-dollar blue chip brouhaha, a small plastic pea was getting all the attention. 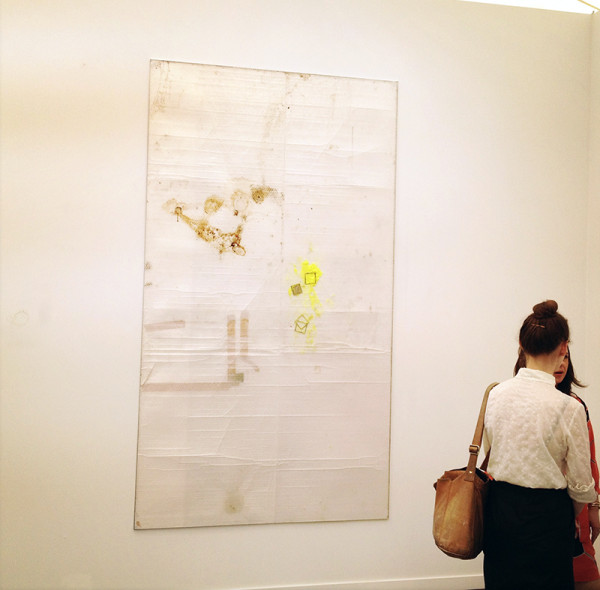 This is a sheet of soiled bubble wrap on the wall. There were all sorts of pieces made out of packing foam, insulation, and cardboard. Some enjoyed success; others did not. Nothing wrong with using discarded materials. They certainly don’t have to be anything other than what they are. 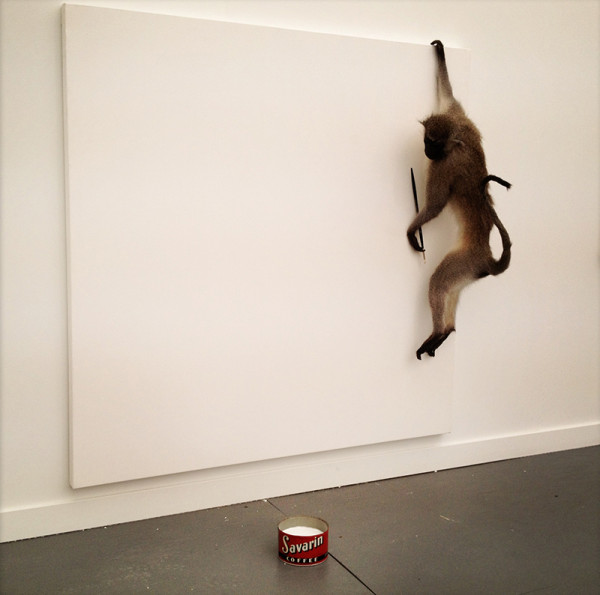 Ah, jeez. This is the only piece that would make sense to my Dad, and probably most other stable, sensibly humorous people. By God, a monkey can do it. 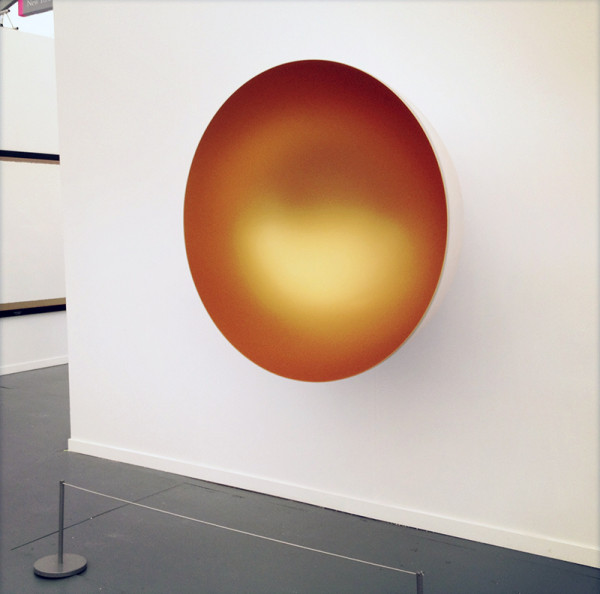 Loved seeing this Kapoor, as I’ve never seen one in person. Once you stand dead center, the horizon disappears and your voice echoes back. Brilliant, simple way of altering a viewer’s experience from a public to confined space. 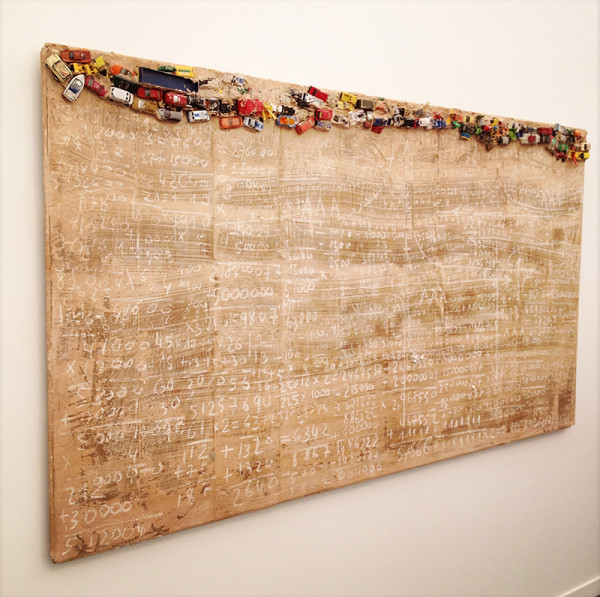 Here’s another piece with tiny cars, this time with complex arithmetic. 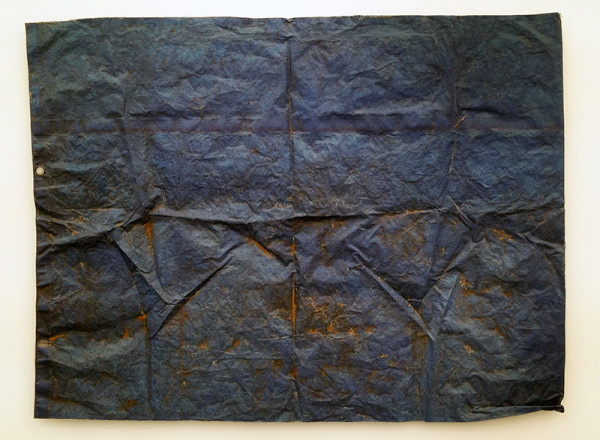 This is a tarp. I looked at it a good while. 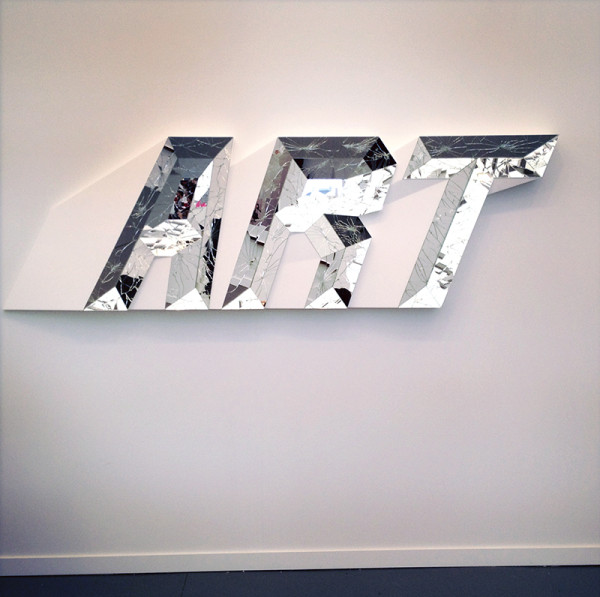 C’mon. I’d be embarrassed if I made this. 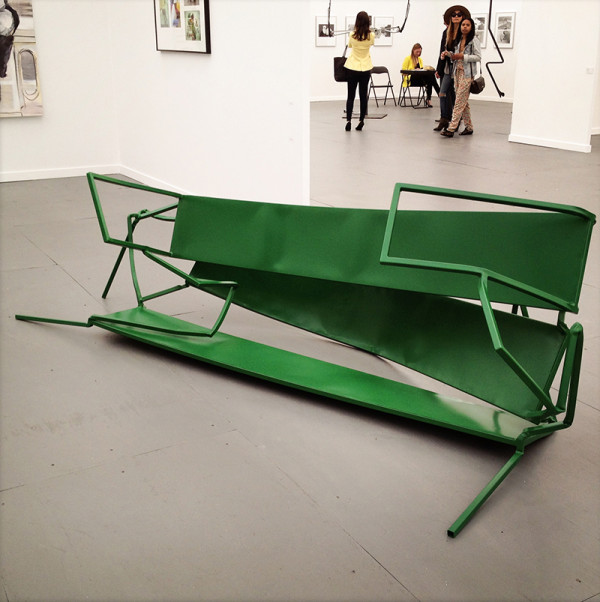 I like this warped shelf. Looks like our organizational systems aren’t that infallible. Thomas Demand has had enough! Just kidding, it’s not a Thomas Demand. 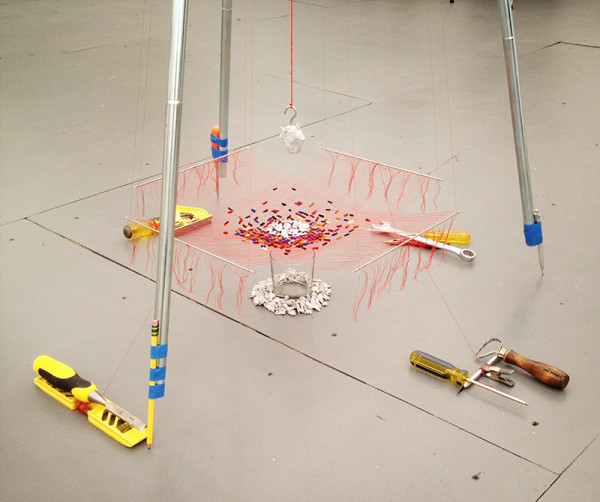 Speaking of organization, I love Sara Sze. This is the smallest piece I’ve ever seen of hers. I think she’s more successful working in a larger space, and not confined to making a self-contained piece. 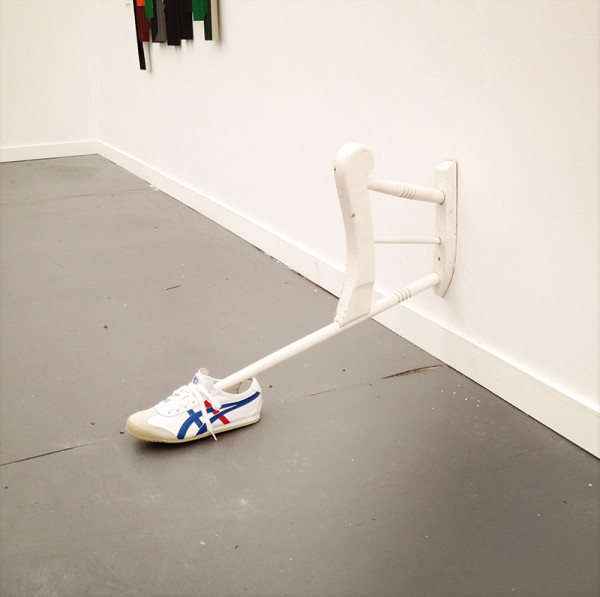 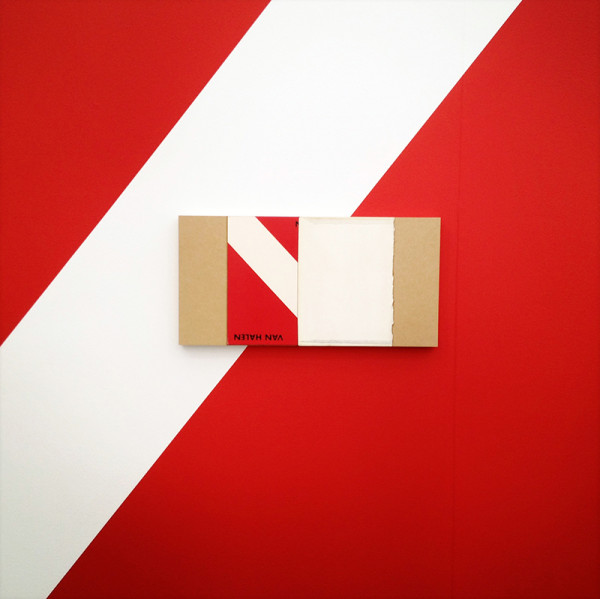 It always gets better when Van Halen shows up. 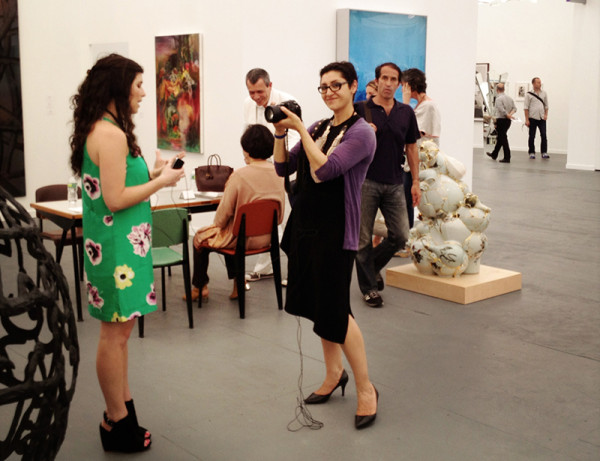 Here’s someone trying to explain what’s going on. Glad it wasn’t me. By the way, I did spot CAMH’s Bill Arning from a distance, and he looked enthused. Don’t know if he’s going to bring the food pieces to Houston, or maybe the cars. I’m pulling for Van Halen. 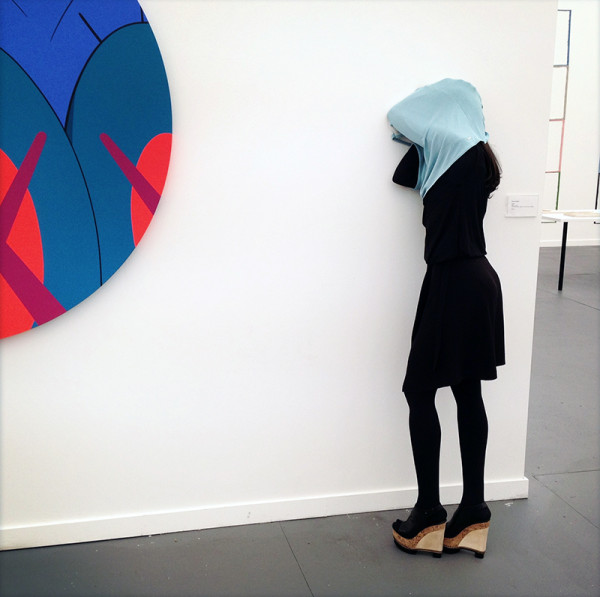 This was the best piece at Frieze. Life castings are to people like light bulbs are to moths. This one just worked its magic. This duplicate human with her face covered up drew a lot of attention, leaning against the wall. Willfully exposed, but trying to hide. Yes.

We missed the gallery show that opened the following week where a full-on life casting of Paul McCarthy was to be shown. You can peek here. 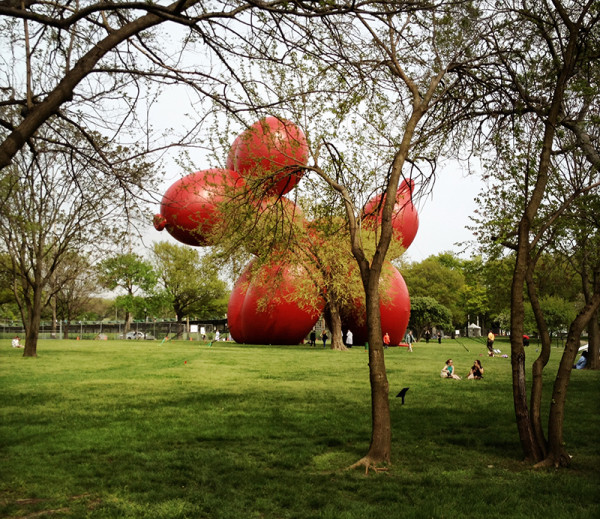 Speaking of Paul McCarthy, here’s the humongous inflatable balloon dog that was on the front porch of Frieze. It sold for nearly $1 million, so I’ve heard. No royalties are being paid to Jeff Koons. (More on him in part two, along with Pulse NY and a couple of gallery shows.) All in all, there was a lot of good work at Frieze, as you might expect. Though I’ve seen work just as compelling at smaller fairs, this was the only one I’ve had to catch a boat to get to—so far.

P.S. My apologies for not including more artists names and/or galleries. It was just one of those weeks. There’s a catalogue available from Frieze at about $40 if you’re interested, or this book (below, also on sale at the fair) if you’re not. 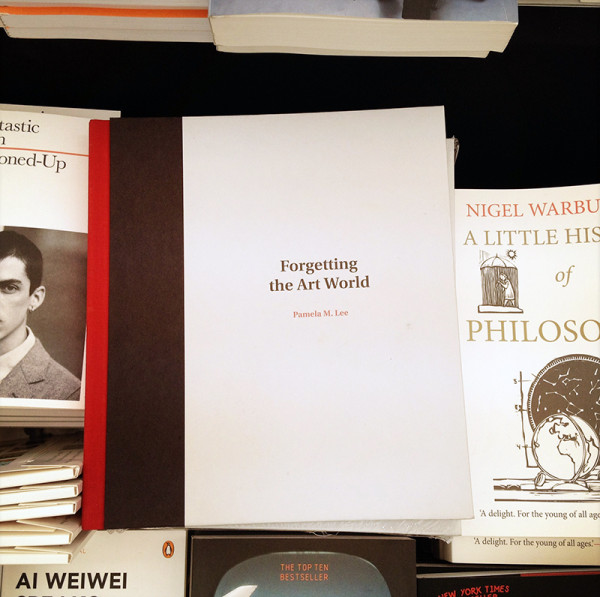 My favorite line was:

People have a hard time with art when they only look for the easy literal read of a piece. It really sucks to have to think about stuff. Thanks for the pictures, but your words need some work.

Ouch Frank, but you’re probably right. The point was that Frieze seemed to be all the rage, but it didn’t necessarily make the work better or more thoughtful. I’ll entertain serious discussion about aspects of a tarp or a sheet of bubble wrap for hours — don’t get me wrong — I was happy to see it — but I’ve seen as good or better work elsewhere. I had a good time, not a hard one. Glad you enjoyed the pictures. The light fare was intentional.

I completely disagree, Frank. It’s refreshing to read an article that says what everyone else is thinking (Frank excluded). While, yes, the viewer has a responsibility to bring their own interpretation to the work, and “work for it,” sometimes…often the art is so off putting from the get-go, or too ‘trashy’ (for lack of a better term) that the viewer doesn’t feel the need to invest time for reflection. Artists have to leave the door open–a least a crack!

No, no, that’s not it. Everyone understands in their blood the motive for sticking a pipe in a watermelon. Many have been enchanted by a dusty tarp. What’s trying is explaining the fuss. But it’s not difficult. Only the taste is unpleasant. What’s being traded on that island isn’t aesthetic value but social status. Good stuff is there surely, but in truth you can find it anywhere or make it for yourself. The art object is just an unfortunate scapegoat, a uniquely defensible bit of ostentation. It’s no wonder many feel excluded from the spirit of the thing and throw up their hands.

And I disagree with Frank. You write terrific, second gear prose.

In John Aasp’s defence, the Frieze environment does not really foster contemplation.

John–As usual, you stir up some good conversation. I enjoyed the banter and your take on Frieze

How unfair Frank, eh… why we are supposed to “have to think about stuff” when the artists don’t have to . What a drag that the 21st century has come to this, right? Let’s picture the early 21st century wing at a museum 200 years from now…woo.

Critics and artists afraid to stand up to the virus that (surprisingly) keeps growing are allowing the Chucky Cheese art era to persist.

We all know the contemporary fine art formula by now right?:
Have you made a humorous one liner tongue in cheek gesture? Check! Did you make your work out of junk and place it on a well made table or pristine wall? Check! Is it going to fall apart or smell bad in the next few months? Check! Will it be appreciated by anyone outside the club? Uncheck. Note, most club members will wear obnoxiously framed glasses btw.

Thanks for kinda standing up mr Aasp. I truly do like the unpretentious classic Glass Tire “Hey were just keeping it light, jus saying…” spirit, but it may not quite be enough to open the eyes that need to be opened to see the emperors new clothes.

Art fairs generate so many great topics to write about it will make your head spin. I think your refreshing photo essay captures serous and humors issues of conceptual art. Bob hit the nail with “Everyone understands in their blood the motive for sticking a pipe in a watermelon.” And thank you John for not going on and on about motives or justifications. A photo is quite enough.

I really enjoyed this article. Andy Rooney would have loved it. I chuckled many times. Is that not the fun of it? Sometimes visuals are just goofy stuff. That said, I am not opposed to creating some goofy stuff and letting someone wonder why I did it. I seem to do it all the time. I believe I will begin working on some things for the next Frieze. Pretty sure I can compete with the pea or a pipe stuck in a watermelon.

I love this article. The best writing about art has lots of pictures and clever, witty, succinct prose.