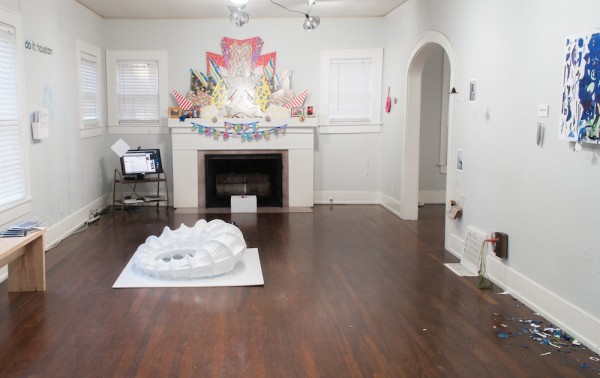 In celebration of the 20th anniversary of Hans Ulrich Obrist’s exhibition do it and the recent release of do it: the compendium, Alabama Song art space in Houston recently presented a one-weekend exhibition, do it: houston. Organized by first-time curators Max Fields and Olivia Junell, the show featured work by twenty-seven Houston artists, based on their interpretations of instructions, or “scores,” written by well-known international artists, from the new book.

The do it instructions provide a preformatted, collaborative sandbox where nobody’s too directly responsible for the outcome. For new curators, choosing such a project for their first endeavor was smart. With an uncommonly clear eye on the future, they chose a foolproof mechanism directly connected to the international art establishment. Leveraging the prestige of star curator Hans Ulrich Obrist made it easy to attract the participation of credible Houston artists, and provided a readymade critical framework for discussing the show—even a readymade publication! Like Uriel Landeros’ dramatic Picasso vandalism, it connected unknown artists to the ultra-famous, without the necessity for a flight to Mexico or a term in prison afterwards. 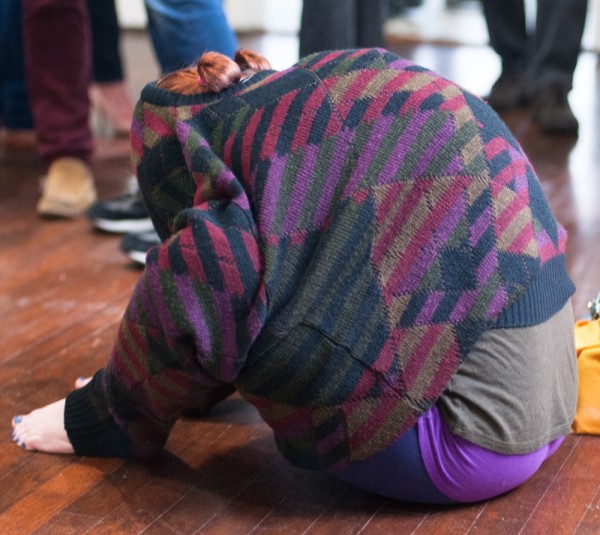 Participating in this kind of artistic byplay is freeing and fun. It allows artists to escape themselves, giving them a temporary license to be someone else. Like all collaborations, it’s also got a leveling effect: good artists abandon their usual work and look worse, while bad artists abandon theirs and look better.

It’s impossible to criticize the individual works in the show, I didn’t get to see them long enough, but a few stuck in my memory: I remember Carrie Schneider and David Feil’s blue pencil lines on the wall, drawn after instructions by Liam Gillick. I remember the rolling computer cart carrying the remains of Jack Ericksson’s Skype/rumor piece. I’m told it was online at the opening, but, guessing from my experience of Skyped-in art happenings so far, it probably wasn’t much more interesting when it was turned on. I remember Joe Havel’s Parrot Hat and Bunny Book, and I remember thinking that someone ought to give Havel instructions more often—freed from the necessity to reiterate variants of his popular, melodramatic pieces, he’s got a sensitive, witty touch. 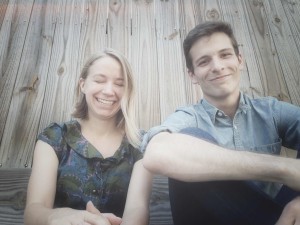 I interviewed the curators on their lunch break from their non-curatorial jobs at the Contemporary Arts Museum Houston. Here’s some of it:

Bill Davenport: Did it turn out the way you hoped?

Max Fields: I think it turned out better than we hoped. When we first started this project, we didn’t know how it was going to turn out. We didn’t really know what it was going to look like until the last two weeks before the show.

Olivia Junell: It was a surprise even as we were getting works in, even if the artists had described it, it might be bigger or smaller.

BD: Was there a point when you feared it wouldn’t turn out?

MF: That happened literally the first day. The first person to respond was Madsen Minax, and then there was this period where nobody responded . . .

MF:  . . . except for people who said, “I’m sorry, I’m too busy.” So, yeah, there was a lot of anxiety. Olivia is better at understanding that artists might take two or three days to email back. I’m obsessed with my phone. We knew that we were going to put it together in a professional way—sure it’s not in a gallery, but we’re going to have wall text. We knew that we were going to have to be really smart about how we laid out the show. We knew that we wanted to get sponsors, because the way we dove into this was, “well, let’s worry about money later.” We were just worried about having the best show we possibly could. So yeah, there was a ton of anxiety.

BD: Were the artists paid to participate?

BD: So what did you need money for? There was some Xeroxing . . .

OJ: Alabama Song had no lighting, so we had to buy all of the lighting. Clamp lights: do-it-yourself track lighting! Installation supplies, we had posters and flyers printed up. For an exhibition, it was extremely low cost. Also ordering 28 copies of the book . . .

OJ: Each artist got a book.

MF: We pretty much bought out Amazon; they had them on sale for $23. We knew things were moving when the stacks of books in my office got shorter and smaller. It’s a bootstrap show that we didn’t want to treat like a bootstrap show; we wanted to treat it like we treat every other aspect of our lives—with respect.

OJ: The artists put so much effort into it, it definitely spurred us on to make sure it was properly represented on our side. We always had intentions to make it a very professional looking show, even if it’s not in a professional. . um . . a less traditional art space.

BD: I read the instructions in the book, and I was surprised that they didn’t specify that you had to have artists—the curators could just do it themselves!

MF: Absolutely. That’s a really fun decision. In the beginning we put together this master list of basically our heroes.

OJ: Everyone we wanted to know and loved already in Houston.

BD: So you wanted to include these artists. Was that part of the motivation for doing the show in the first place?

OJ: Yes, I think it provided a really good framework. This is the first show Max and I have worked together on. It was a good format for starting out. The format was already there and it allowed us to work with people we wanted to work with.

BD: It’s almost as if the artists are props. If you simply put on the show yourselves, you would be artists, but if you involve artists in your project, you’re curators. How do you feel about that?

MF: In the Lyon biennale, Hans Ulrich Obrist curated curators, and he called them the “players.” That is just so cool to me. I like that idea. You see it more in contemporary art, you see the curator playing the artist. I think it’s kind of fascinating, I don’t think it interferes with the artist most times. I think there are places for it. I think there’s a difference between curating a solo show, where it’s the job of the curator to take a step back.

OJ:  Though it’s driven by curators, It’s not a very curatorial show. The artists were given free rein to choose from among three hundred scores written by other artists and then enact that. It’s really more like collaboration on a group project. I kept thinking about it more as a class assignment. I think the whole thing was extremely collaborative.

BD: Especially since a lot of the artists are younger, and they have experience with assignments not too far back in their memories. Did you have any problems?

MF: Sure, if you have an artist come up and say they want things done in a very particular way, and that way goes against the grain of the other 26 artists in the show, it does get tough, and you have to problem solve, which is fun.

BD: If you think it was fun, you didn’t have that many problems.

MF: Sure we did! If everything was super easy, I don’t think we would find it worthwhile to do. If we didn’t learn anything . . . We had an artist that didn’t want to have any documentation in the show. We compromised. Because we’re really honest, politely blunt and honest, the artists respect that.

BD: How did you choose the do it project in the first place?

MF: When I’m not working, I’m reading about art. I went to the CAMH library looking for a book of the week . . .

BD: Book of the week?

MF: That’s what I do. I grab a book, and study it. I saw the book, do it. I was a fan of Hans Ulrich Obrist since I read about Utopia Station; it’s one of my favorite shows of all time. I took the book home and thought it was fantastic. Olivia and I had coffee and I showed her the book; she thought the same.

BD: Part of the original concept of the show in 1993 was museum critique. You said you wanted a space that was more informal. Why semi-formal? You could have had it here, (at Black Hole Cafe), or in a parking lot.

OJ: We definitely wanted it to have its own space with so many artists involved. We wouldn’t want to have it in a cafe because there’s so much else going on. Even if it’s only a pop-up exhibition, we wanted the point of the space, for two days, to be the exhibition. As far as having it in a museum, as we said before, we didn’t know how it was going to turn out. We wanted the artists to have a lot of freedom in interpreting their scores. In an alternative space they were able to do pretty much whatever they wanted to and we could accommodate that.

BD: Did you approach any more formal venues?

MF: They wouldn’t have said yes. Why would they? It has a three-month turnaround; our resumes were pretty amateurish before this.

OJ: This is our first big thing.

MF: These artists had a lot of trust that we would represent them well. I see temporary spaces and pop-up shows as being the way we’re going to be curating for a while. Some of my favorite curators started out having shows in their bedrooms.

BD: That’s how art dealers start out! Curators start as curatorial assistants, then they work up to assistant curators . . .

MF: We’re not doing that. I see us ending up curating in some kind of museum, or institution or laboratory or nonprofit or something. But that’s far down the line. We might approach museums in the future, but not until they trust us. One of the reasons we did this was to establish trust in the community. We had a bunch of other projects in mind before this, but we chose do it because it was the best first project.

BD: It’s like the kiddie pool of curating. The water’s not too deep.

MF: It’s a nice place to dip your toes.

Max Fields works in public relations at Houston’s CAMH. Olivia Junell is leaving town for graduate school in Chicago next week, but promises to return. The duo has other projects in the works for Houston, some as soon as this winter.

do it: houston took place at Alabama Song on July 27 and 28, 2013. The original do it show took place at the Kunsthalle Ritter in Klagenfurt, Austria in 1994, with later reiterations and offshoots in 1997/98 in Bangkok, Bogota, Brisbane, Geneva, Glasgow, Helsinki, Ljubljana, Nantes, Paris, Reykjavik, Siena, Tallinn, and Uppsala.

The book, do it: the compendium was published in April 2013 by DAP. 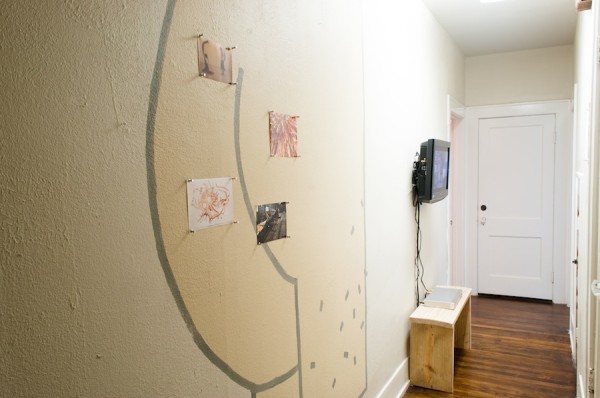 I love Obrist’s do it project. I have my art appreciation students choose a couple of the projects from the online site and complete for our fluxus unit. There’s so much freedom and play involved. Sorry to miss the Houston exhibit!