Does Galveston need another pyramid? Driving daily past the inverted glass ashtrays of the Moody Gardens, Sallie Barbee and Eric Schnell, co-directors of the Galveston Artist Residency, thought maybe it did.

As an art incubator, the G.A.R. is naturally interested in the aesthetics of the Island, its beauty, but also its integrity—the cultivars that generate beauty. Galveston, as Schnell says, comes and goes—its spirit of place surviving tourists, offshore rig leakage, sewage spills, oil tankers, big box stores, hurricanes—all posing different kinds of challenges to this northern end of the Texas Riviera.

“Pyramid,” then, is a rebus—shorthand for the renewal of the island, a freshening of its energy and form. Through a series of conversations last year, the directors explored the mytheme of “pyramid power”—its historical associations, iterations in the Americas as well as in the Middle East, its various reputations and rumors. Since the G.A.R. has neither an enslaved population nor the budget of an Arabian Emirate, they decided that their pyramid would have to be bildungedank—an ideaform of Galveston in all of its future glory. 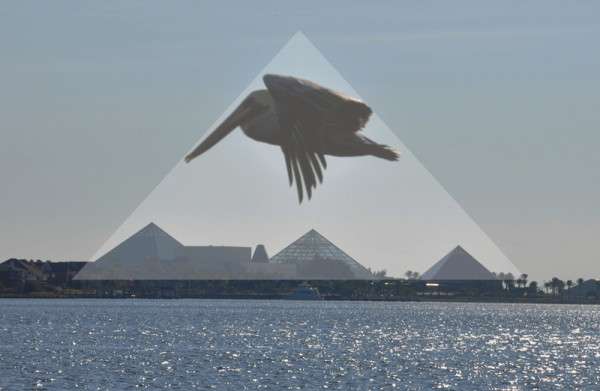 Now the funny thing about analogues is that they are often the first step to alternatives. No one really thinks twice when a glass pyramid full of botanical wonders can still feel dehumanizing, bleak, awkward. The experience just blends in with the quiet brutalities of bad architecture, dead food, garish lighting and bottomless noise—the Gargantuae that swallow and spit us out on a daily basis. Yet through a series of visits to the Moody Gardens, Eric and Sallie began to develop a felt sense of what they wanted from an enlightened version of the pyramidal space.

Cue the artist. Jesse Bransford, teaching in Abu Dhabi last year, receives an email from Eric, his former Columbia University colleague. G.A.R. had been ruminating a gift to the Island, a fourth pyramid to regenerate its beauty, would Jesse be interested in the project? The artist responded almost immediately—attaching the image he had seen in the previous night’s dream and had drawn upon awakening. Yes, it was a pyramid.

If you want to change something, a pyramid is your go-to instrument. It functions as an inverted crucible—pyre referring to fire (as in “the fire of time”) and mid to measure—each of its four faces, defining direction. Thus the form represents time and space—the foundational categories for human perception. A pyramid is a unique expression of those categories in the quality of containment it affords: balanced, inviolable and dynamic—all at once. 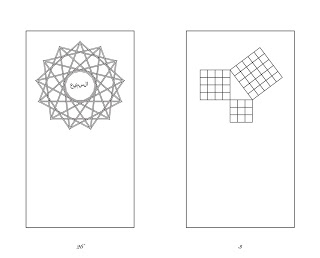 Before we venture any farther into what the Bransford/Barbee/Schnell triumvirate hath wrought, I would like to take a moment to address the question of credulity vs. doubt. Before visiting this installation, if you can reach far enough into your own mind to adjust your belief-o-stat, I recommend turning the thing off entirely.  This is a few clicks beyond the Keatsian “willing suspension of disbelief” because you are enjoined to suspend belief as well. All artwork is in some sense thaumaturgy, wonderworking, but as I have written elsewhere, the question is whether we are able to meet the work where it exists—which is not necessarily where our devotion or doubt would look for it.

Arthur C. Clarke famously stated that “any sufficiently-advanced technology is indistinguishable from magic.” Life being the two-way traffic circle that it is, an axiom elevates to truth when its terms are reversible. The Fourth Pyramid demonstrates that “any sufficiently-advanced magic is indistinguishable from technology.” The material common to both:  deep mathematics—expressed as algorithms, Pythagorean geometrics and recombinant sequencing—although as art, the technology/magic  is written out for the sense we call “visual.” 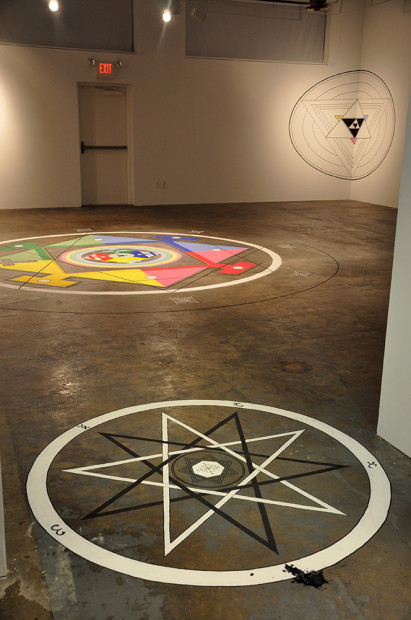 Bransford’s body of work draws from at least six traditions, the three root directories being Tudor-era (Elizabeth I) ceremonial magic, Shaivite (Agamic) iconographies and Islamic mysticism. Kabbalah & Neoplatonist thought also figure into The Fourth Pyramid, which was worked into the walls and floors of the G.A.R. gallery over several weeks during a residency taken early in 2013.

Although there are images available of how the show looks at night, hours at the gallery restrict visits to a daytime ambience. In that broad light the show dazzles, walls coruscating with the kind of light that inhabits any land near big water. In France, we would call this the Midi-effect. Here it simply collects behind people’s attention, waiting to be enjoyed. After the initial wave of blanche (and your pupils begin to dilate again), the diagrams on the floor and murals will present themselves. The grounding image is variously called mandala (Buddhist) and yantra (Hindu). The two terms, though used interchangeably, are of very different objects, and Bransford’s diagram—with its geometries and syncopations—tends toward yantra, meaning machine or engine in Sanskrit, but whose root yam (pronounced yum) also signals containment or control. No machine runs without captured energy. 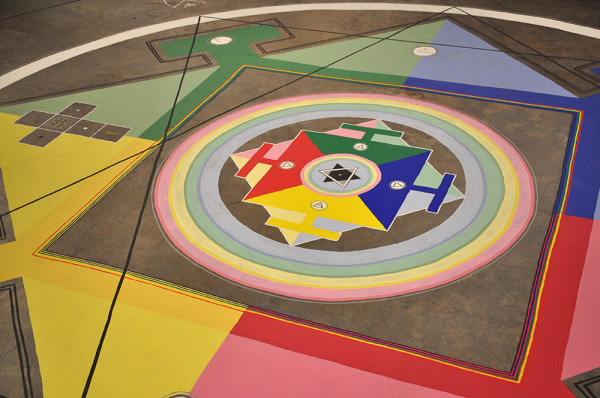 The murals are much simpler in one sense, or perhaps their complications have been unpacked along three walls. It is up to the viewer (hearer/walker/toucher/breather) to work out the dynamic they instigate, which is reflected in the sigils that surround the yantra, each glyph re/presenting a planetary intelligence. But I will leave you with this: by “intelligence” I mean the whole spectrum. From one end—let’s call it this side—we have our awareness of the “Wanderers” which inscribe our sense of time (SATURNSday, SUNday; MOoNday, etc.); from the other side, there are the planets’ own embrace of Gaia as part of their familias. Humans included.

Postscript:  Artists, like wizards, walk around with Wholes in their heads. Getting those Wholes out here where we can see them, a/k/a “artwork,” is a delicate balancing of creative subtractive forces, mostly dedicated to removing the barriers to that Whole. Fragmentary and transient as it may seem, the world is still a plenipotency, able to bestow itself entirely upon those who will have it. Artists keep us moving toward that reality. Now that is the Magic.

Jesse Bransford: The Fourth Pyramid will be on view at Galveston Artists Residency, 2521 Ships Mechanic Row, until Saturn’s Day, April 6.

Myth and Legend: Dawolu Jabari at the Galveston...