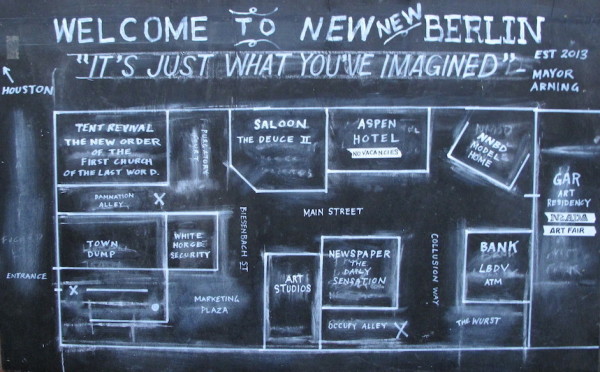 The premise for William Powhida and Jade Townsend’s show was exciting: build a Wild West town complete with saloon, jail, newspaper office and tent revival in the Galveston Artist Residency‘s courtyard. Local artists would play the parts of hotel clerk, barkeep, and preacher. Inside, the GAR’s art gallery would become “NevADA Art Fair,” a shooting gallery where visitors could decorate canvases in mock art fair booths with semi-automatic paintball guns. Everyone dress like cowboys! 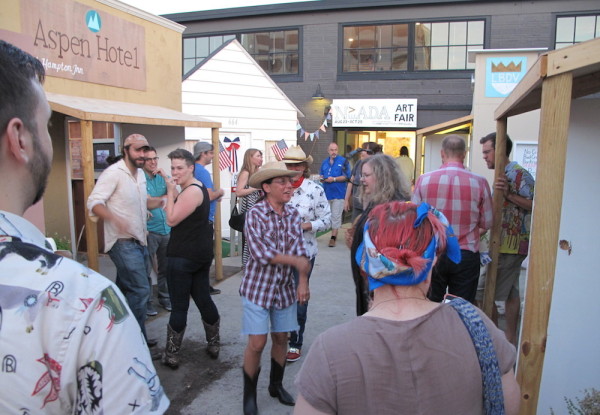 It didn’t quite work. The town set is ambitious, and, with production values like the set for a school play, achieved a workable level of realism. Details, especially texts like the signage and newspaper, were great. But, as you might expect from visual artists doing a theater production, too much effort went into the sets, and not enough thinking about the action.

I just came back from Colonial Williamsburg, a no-expense-spared re-creation of an 18th century town in Virginia, where 18th century shops are open, 18th century restaurants serve food, 18th century shoemakers make shoes, and 18th century pigs wallow in the 21st century mud, just as if a couple centuries hadn’t gone by. But even that’s not enough: the place only comes alive through an army of costumed actors, who re-enact little episodes in the life of the town that dramatize its story. New New Berlin works more like a conventional art opening, where you mill around, drink, and talk. The few actors had poorly defined roles and went in and out of character.

When you visit the Renaissance Festival, the crowd IS the show: you eat turkey legs and watch men in tights battle with wooden swords, with an occasional fire juggler or buxom maiden thrown in for variety. If Powhida and Townsend were counting on a crowd of rowdy, costumed visitors to play along, we were all disappointed. We weren’t allowed to fire the paintball guns at one another from the structures in the Wild West town, (which, BTW would make an excellent paintball venue). I had even brought my black hat. 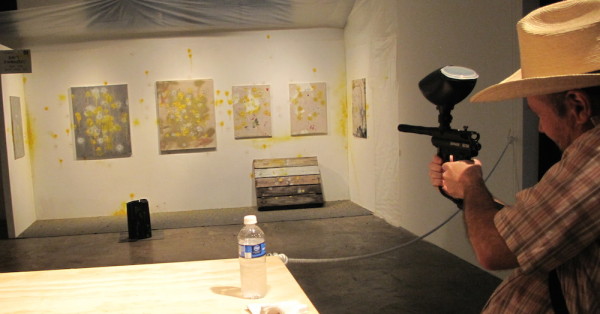 When two New York artists spend a month in Texas constructing a satire of the state’s reactionary foibles, it had better be good. William Powhida is famed for his send-ups of the art world power structure, but he should stick to what he knows. His critique of gun-toting, Bible thumping, cowboy culture isn’t nearly nasty enough; without real knowledge, his lampoons are, of necessity, blurry and clichéd, which might be OK in New York, but to viewers here who struggle daily to understand how Texans can be such good people and still have such appalling attitudes, it’s simplistic carpetbagging. 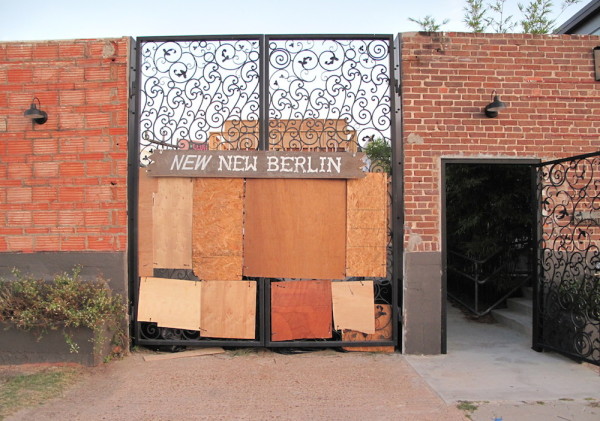 New New Berlin ends up a show that is best seen through the wrong end of a telescope. From far enough away, Powhida and Townsend‘s piece sounds exciting, their wit seems sharp, but here on the ground, it’s like the long, overworked movie parodies that were the least funny part of Mad Magazine. A one-panel comic strip stretched into an oversized installation. Lord knows there’s plenty to parody in Texas and in the art world. But if this is a tryout in the sticks, the show needs some reworking before it premieres in the big city.

Leaving New New Berlin, we’re back in old old Galveston, where dozens of Keliy Anderson-Staley‘s tintypes are on view at the Galveston Art Center in exile. 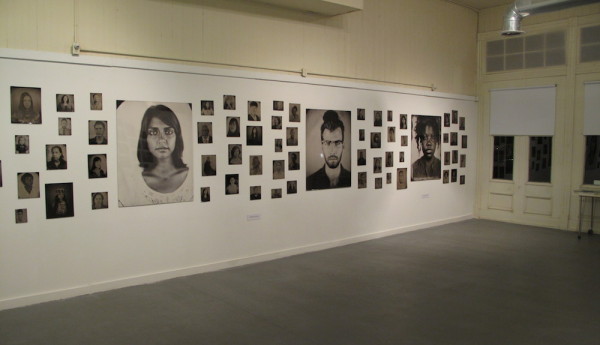 I’m wary of photographers using antique processes. This kind of thing has been going on ever since the 1990s, when photographers, like wooden boatbuilders, made a fetish of their ancient craft as it began disappearing. Stereoscopes, zoetropes, cyanotype, pinhole cameras and the Diana were all ways of eulogizing analog photography. It’s a gimmick for sure; the question is whether it’s anything more. In this case, I think it is.

The show includes single portraits from Anderson-Staley’s series [hypen] Americans, that depict the faces of a cross-section of people of different physical types, where Staley’s time-machine technique makes the inequities of history startlingly present. Lacking overt clues to status, like fancy dress or telling backgrounds, many of Anderson-Staley’s old-style photos propose 19th century roles for present day people based on their faces and hairstyles alone. Farm wife, backwoodsman, cowboy, freedman, warrior or immigrant; who we can imagine these people might have been, had they lived back then, is sharply constrained by their race.

Recording faces is about the most important thing that photographs do, and Anderson-Staley’s portraits are part of the most popular, most commercially successful and earliest genre of photographic practice, right alongside everyone from Nadar to Galveston Old Time Photos, just a few blocks away, who can make you into a saloon girl, pirate or civil war hero for $19.95. Anderson-Staley uses her antique process to disarm preconceptions; portraits that might be overlooked were they done in a more contemporary medium get a second, harder look.

Seeing your Facebook friends wearing the same grim expressions as their 19th century forbearers makes you understand how much the technique influences the way perceive the personalities of the past. Of course we’ve been told about the impossibility of capturing fleeting expressions, (long exposures, neck-braces and the like) but you’ve got to see it to believe it. 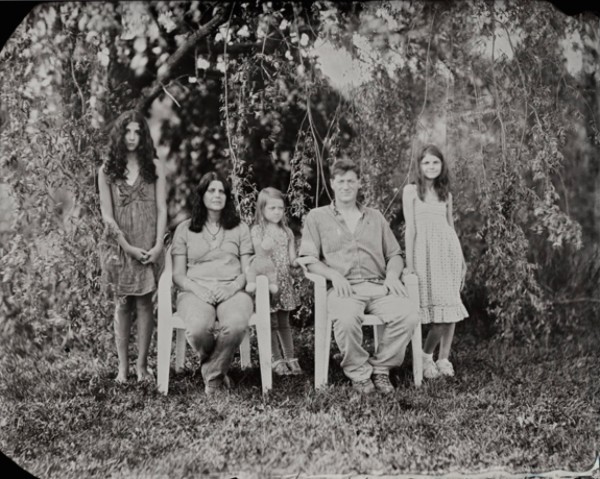 Staley is careful not to play up the anachronism between her subjects and her technique, but neither does she play it down. She mostly eliminates most obviously contemporary clothing and details, but is careful not to make her subjects purposefully antique. The result is fascinatingly ambiguous. These are definitely not hokey re-creations of antique tintypes. Anderson-Staley thoughtfully repurpose an old medium to raise awareness of the historical and social dimensions of portraiture, the mother of all photographic genres.

William Powhida and Jade Townsend‘s New New Berlin and NevADA Art Fair will be on display at the Galveston Artist Residency through October 25. Keliy Anderson-Staley’s On a Wet Bough: Contemporary Tintype Portraits is on view at Galveston Arts Center through October 5, 2014.

Tonight! Meet and Greet With New Artists At...