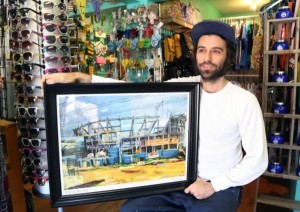 The artist behind the recent Prada Marfa vandalization, Joe Magnano, also known as 9271977, is scheduled to stand trial for his West Texas art antics next Friday, May 2, at 9 am in the Jeff Davis County Courtroom. Magnano was arrested on March 19 and is accused of two counts of criminal mischief. He will have legal counsel from Bill Johnson.

By way of a preemptive legal defense on his own behalf, Magnano sends this missive in case we “entertainment driven types” would like to spin his art-making as “domestic terrorism.” If the dynamics of Magnano’s logic still elude you, let us know if this clarifies anything to you.

Art is an interesting tale… which one would assume art is for the betterment of humanity, a progression of sorts,,, if you are truly an artist. When I was dismissed from San Francisco Art Institute in 2013, I thought much about the health of art. Observing and thinking it is a general misfortune that we as studiers, makers, livers and creatives of life (the ones living) follow art as a historical context of once existing than an actual happening in current time; as though the happening is no longer possible. Perhaps due to rules, laws and the folks that garner those rules and laws for their protection such has Elmgreen and Dragset,,, which puts us in a state of absolute, rhetoric, perversion, staleness, digression and weakness. A simple lesson can be learnt from the progression of art. Because art is everything, and anything can be art, but art is everything. Everything. But that doesn’t mean its absolute in its iconic permanence. Prada Marfa had soft spots in its creation, just like any infant creation. And then such creation should evolve.

I love Ancient Greek History. I can see so much relevancy in it. Including the fraud behind Prada Marfa.

Going back to perhaps the beginning of our Western Canon – the same Canon that created and inspired our systems – the same Canons that are taught in liberal art schools, Socrates says in Platos Gorgias that the notion of art as part of an inquiry into the nature of rhetoric. Socrates distinguishes between true arts and false ones which create an incorrect impression of good by means of the pleasant. Socrates maintains that most of his contemporary Greeks and Athenians have been led astray from the path of virtue exactly because they mistake false routines of pleasure for true arts of good. Consequently, for Socrates’s fellow citizens, the nature of politics, justice, power, good living and the like is based upon a fundamental conflation of true and false arts corresponding to a belief that the pleasant equals the good. The entire text of Gorgias considers how this confusion of art with flattery manifests itself, and as such it adds great strength to Plato’s overall philosophical project of defining virtuous existence.

And in case you don’t know what the Gorgias is, Magnano has politely included a link to the Spark notes. Here you go: Gorgias.

Thanks for clearing that up.