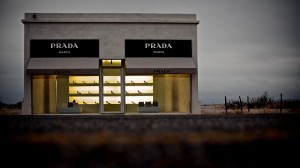 Now that the Playboy Marfa has been officially classified by the Texas Department of Transportation as an “illegal outdoor advertising sign,” someone has asked the inevitable question, “Aren’t the fake PRADA MARFA store signs on US90 in Valentine illegal ads, too?” and the answer just may be yes.

Assistant Attorney General Oren Connaway, who was involved in discussions about Playboy Marfa’s legality, is the person who raised the question in a July 9 email, reports the New York Times/Texas Monthly. Wendy Knox, the transportation department’s supervisor of the Outdoor Advertising Regulatory Program, replied that the Federal Highway Administration had confirmed it was illegal. “And we will take action on it,” said Knox.

Prada Marfa supporters cite several differences between the two installations. The first is the feeling that Prada Marfa, inaugurated in 2005, has squatter’s rights. “I would have thought the statute of limitations had expired,” said Boyd Elder, a local artist and the site representative for Prada Marfa. Another is that Playboy Marfa was commissioned and paid for by Playboy, while Prada Marfa was an independent project by artists Elmgreen and Dragset (although with Prada’s cooperation).

According to the state, a sign is a sign, and both signs violate the 1965 Highway Beautification Act signed by president Lyndon B. Johnson and championed by his wife, Lady Bird Johnson. As yet, there is no final decision on Prada Marfa and the department only notes that “we are still working on this issue.”

UPDATE: We received this notice from a Playboy representative today: “The notice was expected, as TxDOT made us aware of their rules requiring them to issue it as part of our ongoing discussions. TxDOT immediately granted an extension of 60 days beyond the timeframe in the notice, reflecting our mutual desire to keep the discourse open. We are confident in reaching a resolution for the Marfa art installation within the planned phases of Richard Phillips’ artistic collaboration with Playboy.” No update on the Prada piece.