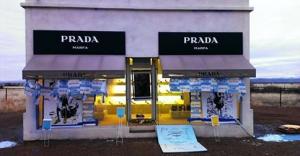 On November 7, A little more than a week before his trial was set to begin in the 394th District Court of Jeff Davis County, Prada Marfa vandal Joe Magnano pled guilty to two counts of misdemeanor criminal mischief. According to the Jeff Davis County District Attorney’s office, Magnano agreed to pay $10,700 restitution to Ballroom Marfa, which maintains the sculpture, and a $1000 fine. He will be on probation for two years, and agreed not to further publicize nor profit from his actions.

The 36 year old Waco artist, acting under the pseudonym 927 1977, was responsible for painting Elmgreen and Dragset’s Prada Marfa blue and attaching incoherent manifestos to its front awnings and windows on March 9, 2014.

On April 17 a Jeff Davis County grand jury indicted Magnano with two counts of felony criminal mischief, each of which could have carried a penalty of two years in prison and a $10,000 fine. Magnano’s trial was set to begin on November 18. The case was going to be a tough one to win, as Magnano had admitted his crime in to the Waco Tribune and other press outlets.

The investigation of Magnano’s confessions provided a close-to-home illustration of law enforcement’s relations with the press in Texas. On March 14, Jeff Davis deputy sheriff Jerry Walker served Big Bend Sentinel reporter John Daniel Garcia with a subpoena demanding he “produce and permit inspection and copying” of “text messages from an artist known as 9271977.” The Sentinel published an account of the subpoena and comments from law enforcement officials, and a summary of the 2009 Free Flow of Information Act which outlines standards the state must meet to compel reporters to divulge information.