While Austin is generally thought of as a good film town, the city has not always presented a real diversity of film exhibition–especially in terms of experimental work. Thankfully, that’s getting a lot better these days, thanks in no small part to a group of determined aficionados that are hustling to bridge the gaps and connect the film and visual art scenes through smart screenings in various venues. Experimental Response Cinema has been responsible for some of Austin’s most interesting screenings over the past year or so, and continues to expand appreciation of moving image media as something more than just “movies.”

This Wednesday, April 9th, ERC is teaming up with the Alamo Drafthouse Cinema and Contemporary Austin curator Heather Pesanti to present a selection of rarely-seen experiments that investigate the nature of moving image media and perception. The Machine Vision program includes film and video works by important interdisciplinary artists and theorists that were all associated with the first decade of the now-legendary Media Studies department at State University of New York at Buffalo–the first such university department and a hotbed of rigorous formal media investigations beginning in the early-1970s. ERC Co-Programmer Ekrem Serdar explained to me that the idea for producing this screening “originally came from a desire to showcase some of Paul Sharits’ multi-projector work, and it expanded from there to become an evening of formal explorations of the moving image–the apparatus and conditions that make it possible.” 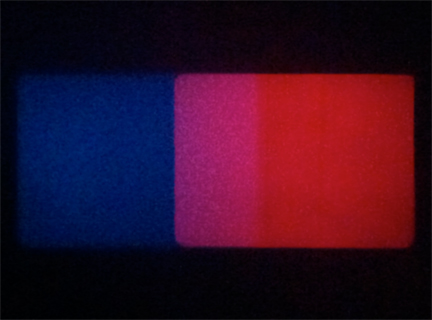 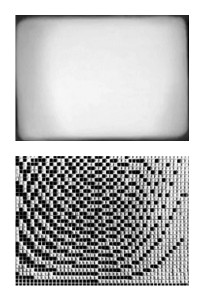 The Flicker by Tony Conrad, 16mm, 1965. Above: A clear (white) frame. Below: Exposure timing sheet used to map the film’s rhythms.

The Sharits work mentioned is his Shutter Interface, a dual-projection presentation created in 1975 that reveals film’s intermittent shutter mechanism through the projection of single film frames of different colors. Also featured in the program is the most famous of film flicker investigations–Tony Conrad’s hypnotic, stroboscopic film The Flicker, composed solely of alternating pure black and white light at changing rates. Both The Flicker and Shutter Interface are fascinating, structural film works that require a certain situation and projection system to be properly presented, and I don’t think it would be a leap to suggest that this may very well be a once-in-a-lifetime opportunity to experience them.

Hollis Frampton’s A Lecture–a presentation of projected image and spoken text about the nature of film first presented at Hunter College in 1968–is a great opening act for the program. Broadening the inquiry, Urban Episodes by influential video art pioneer Steina (Vasulka) stands out as the latest work and sole video in the program. The screening will be introduced by Heather Pesanti, Senior Curator at The Contemporary Austin and organizing curator of the 2012 Albright-Knox exhibition, Wish You Were Here: The Buffalo Avant-garde in the 1970s–an extensive survey including works by the artists represented here. 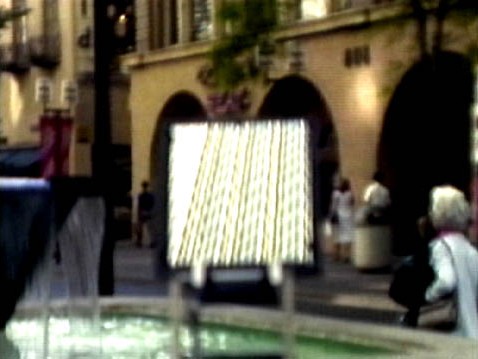 The Machine Vision program may prove somewhat challenging to the uninitiated, and could even be hazardous to those prone to photogenic epilepsy or migraines (The notes warn of the program’s long periods of flickering light, and they ain’t kidding.) That said, this is a smart program and rare event that gets down to the stuff of light, time, mechanics, and perception beneath all of our audiovisual culture. One doesn’t have to be a seasoned academic or a trip-seeking stoner to appreciate these films, but certainly open, interested, and willing to journey inside the eye of the moving image machine.

Awesome! I wish so badly I could be there!