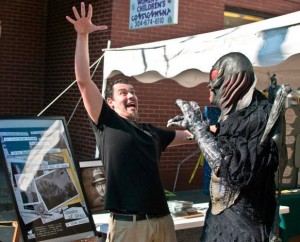 What do you get when ten teams of filmmakers team up with ten nonprofit orgs to make ten films in 48 hours? The first-ever Reel Change Film Frenzy! On January 13-15, ten filmmaking teams race to make cause-driven films in Austin, highlighting Austin’s filmmaking community and “awesome organizations working to improve our world.”

Participating nonprofits and filmmakers get paired up at a kick-off happy hour at The Highball at 5:30 on January 5.  The filmmaking race officially begins when the teams convene in front of the Alamo Drafthouse South Lamar on Friday, January 13 at noon to get final instructions and GO! Finished films must be ready for viewing  by noon on Sunday, January 15 and will be screened at the Alamo Drafthouse Cinema that evening, where a panel of judged will choose one film to go on to compete in the Lights. Camera. Help. Film Festival in September.