This was my third year attending the Dallas Video Festival and it was by far the best year in terms of venue and programming. Held primarily at the Alamo Drafthouse Cinema, festival attendees had the luxury of drinking fresh micro-brewed beers and eating good food while enjoying the flicks. As a rule people won’t hang out for 8+ hours each day over a long weekend, unless there are ample refreshments. Another plus was the video café, located a few doors down. Offering a separate screening area and lounge, filmmakers could network, socialize and/or conduct video and podcast interviews with the press. 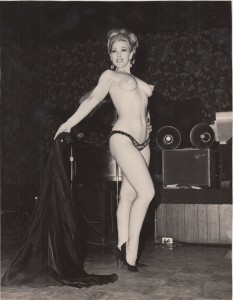 The opening night world premiere screening True Tales was held at Gilley’s in the Southside. The pre-show included a burlesque performance by the Ruby Revue. It was a sexy and tasteful strip tease; I did my part hooting and hollering. The dancers in the performance also appeared in the subsequent film.

The film delves into the life of Tammi True a.k.a. Nancy Myers who was a burlesque dancer at Jack Ruby’s Carousel Club in the 1960s. The publicity surrounding the film promised that the former star would reveal secrets about the Kennedy assassination. With the 50th anniversary of Kennedy’s death, I understand how this marketing strategy would help with screenings and distribution. However, the revelations were the least interesting part of the film. The film reveals that Jack Ruby wasn’t a mobster. Nor did the mob put a hit out on Kennedy.

The film is really about Myer’s life. At 78, she is still a fireball and a colorful personality. She had me laughing out loud multiple times. As she tells stories about Jack Ruby and working as a dancer to support her two small girls, the sixties come alive. Director Katie Dunn interspersed archival footage of Kennedy, Oswald, and Ruby with re-enacted scenes of Myer’s life. The jail scene was filmed in the actual cell that Ruby occupied while waiting for trial. The reenactments were most successful when portraying the burlesque club scenes. After the film, Myers gave a Q&A. She was just as lively and irreverent in person as in the film. 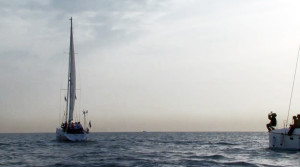 Thursday night I attended two gems—both world premieres. Vessel chronicles the work of Dr./Capt. Rebecca Gomberts and her organization Women on Waves who provide access to safe non-surgical abortions. Director Diana Whitten spent five years traveling with Gomberts at sea and on land. After traveling to several countries in a floating shipping container and transporting women to international waters, Gomberts decided that the most effective way to save women’s lives was to disseminate information, providing covert, grassroots training and education. Whitten intermixes interviews with Gomberts and her team with live footage from the ship, documenting protests, police action and media frenzy. One of the film’s more shocking moments occurs when the Portuguese government sends a warship to prevent Gomberts’ team from entering the port. As if a ship full of healthcare workers was a true threat to national security.

Whitten also uses drawn animation to communicate some of the medical information. This effectively adds visual interest to what would otherwise be dull data. One risk in dealing with such a polemical subject as abortion is that humanity may become lost within the debate. Whitten successfully avoids this by including emails from women around the world who are seeking help. Dear Women on Waves, I’m not married and am pregnant. I hear that you can drink bleach, but worried that it will kill me. Can you help me? Signed—a woman from Morocco. The film inspires shock and outrage, but ultimately imbues hope. 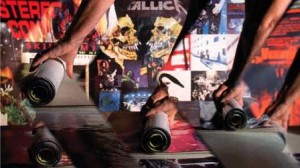 After the emotional rollercoaster of watching Vessel, Jodie Mack’s 60-minute psychedelic animation Dusty Stacks of Mom: The Poster Story was a welcome reprieve. Mack’s work defies categorization. Part documentary, part rock opera and part kitschy animation, the artist tells the story of her mother’s now defunct poster and postcard business while singing her own re-interpreted version of Pink Floyd’s Dark Side of the Moon. It sounds crazy and it is crazy; that is its brilliance.  This tour-de-force won 1st prize in the experimental category. I could watch it five or six more times and never quite grasp all of the nuances.

Deviating from the traditional film festival format, DVF programmed the experimental video artist group NoiseFold who performed live Friday night with German musicians Trio Kaze at the McKinney Avenue Contemporary. The artist duo David Stout and Cory Metcalf use complex sensory computer systems that generate audio feedback and sound a.k.a. noise. The amount of equipment was dizzying and I don’t pretend to understand how it all works, but the effect is unlike anything I’ve experienced—a visual and aural cacophony.

Saturday, I spent the day watching experimental video programs. As in previous years, Mike Morris and Carolyn Sorter curated ambitious global programming. Organized into thematic programs, some works I loved for their imaginative approach to video and some were too challenging for my A.D.D. attention span. But that is more of a personal defect rather than a programming flaw. In Dallas, this is the only opportunity to see the depth and breadth of what is happening globally in video art. 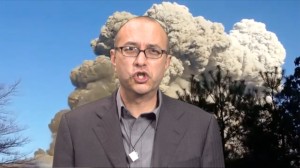 Two of my favorite works both address themes surrounding art and the artist. Wago Kreider’s video We Regret to Inform You transforms artist rejection letters into a musical hymn. As a member of The Church of Contemporary Art, Kreider and other members utilize the structure of a Christian church service to emphasize the challenges that professional artists face. Kreider was quite convincing as an evangelical worship leader in this laugh-out-loud parody. 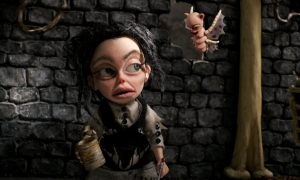 Also examining the artist’s plight is Isabel Peppard’s short, prize-winning animation Butterflies. A young female artist tries to make a living by drawing pictures for street passersby. What struck me was the detail in the animated character’s face and hands. Although young, the girl looks haggard, with exaggerated dark circles under her eyes and pronounced purple veins in her hands. Flying around her are “butterflies” (which resemble nocturnal vampire bats more than ethereal insects).  These creatures represent the protagonist’s imagination and hope. Every time she suffers a criticism or set back to her dreams, a butterfly dies. This metaphor made me physically cringe every time a soul-crushing death occurred. 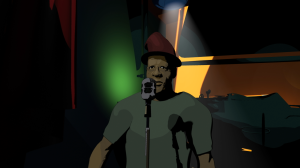 This year’s video festival included more documentary features and more specifically—animated documentaries. I am not sure if this is a trend in documentary filmmaking or a festival trend, but I found that I was curious and much more interested in engaging with some of the issues due to the animated visuals. OwnerBuilt by Lawrence Andrews tells the story of a man whose home was destroyed in Hurricane Katrina. The characters re-enact the narrative as if performing in a play. In addition to the meta-narrative, there is an underlying theme that questions the veracity of photography. The characters discuss how much information can be gleaned from photographs. At times it was difficult to follow the storyline, but the experimental structure and animation left me thinking about issues of race, class, and historical documentation long after the film was over. 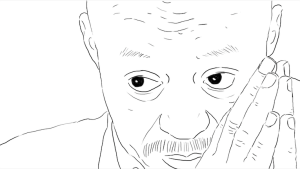 Dee Hibbert Jones’ and Nomi Talisman’s Living Condition is a feature-length animation that tells the story of four families with a relative condemned to death row. I saw the story of Bill, a 30-minute segment in which the protagonist Bill recounts the circumstances surrounding his friend Manny’s death sentence. The film brings up issues of racial inequality, justice/injustice, care or lack of care for our military veterans and basic human rights. Like Vessel, my emotions ranged from outrage, to profound sadness. Unlike Vessel, I did not leave the screening with hope. Perhaps hope emerges from the awareness that surfaces when artists humanize and personalize a heated political issue.

My final screening was a happenstance occurrence at the video café bar. I recognized a man with a distinctive handlebar mustache, who I had sat next to on opening night.  Unsurprisingly, he is a filmmaker. His story and his work are remarkable and will be featured in an upcoming article. So stay tuned.

The 26th Dallas VideoFest took place at the Alamo Drafthouse Cinema in Richardson, TX on October 9-13, 2013.

Nice review, Colette. I never get to go to DVF so I’m glad to read your recap.

So glad to see such good coverage of such an important event.