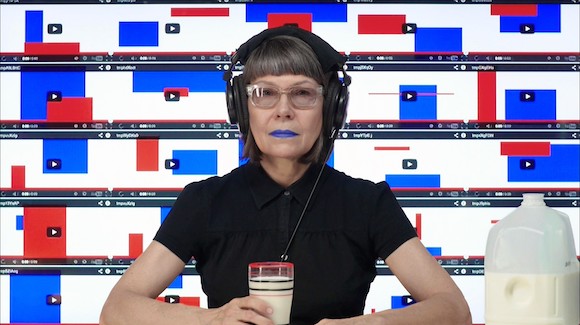 This week the Meadows Museum at SMU announced that Dallas-based artist Carolyn Sortor has won the Moss/Chumley North Texas Artist Award for 2018.

Each year the Meadows awards “an outstanding North Texas artist who has exhibited professionally for at least ten years and has established a proven track record as a community advocate for the visual arts.”

Sortor, a true multi-media artist, has produced new-media based work for years, and has often been ahead of her time in her use of digital, video and internet sources. She is also a writer, curator, and retired attorney. She was the Chair of the Video Association of Dallas (VAD) from 1996-98. Her work has been shown at Dallas Museum of Art, the Nasher Sculpture Center, and the Contemporary Art Museum Houston.

Most recently, Sortor’s collaboration with Dallas’ Michael A. Morris was the inaugural show at the relaunch of The MAC in Dallas, with their Working Groups exhibition. (To watch the video included in that exhibition, please go here for its guest run on Glasstire.)

“In her media-based practice, Sortor explores the intricate and complicit nature of social, economic, and political systems. Among the themes that emerge from these investigations are issues of identity, migration, borders, and boundaries. Working primarily in video, her work is a timely engagement with how we consume information in today’s society. Sortor also takes inspiration from Nicolas Bourriaud’s text ‘Relational Aesthetics’ (1998), and incorporates relational strategies, as well as curation, into her practice.”

There will be a private reception presentation of the award in April, and a “work by Sortor will be installed in the museum’s galleries for approximately one month this fall to coincide with a talk by the artist on November 7, 2019; visit the museum’s calendar this summer for further details.”